Stiltonia, more fully known as Stilton-on-the-Rocks (Chezzen: Stiltonna-ende-Roque), is a small, developed country in southern Paradoxia. It is governed as a monarchy with two coregents - the Bishop of Stencken and the Jarl of Stiltonia. Stiltonia has a population of 4 million inhabiting an area of 46,000 square kilometres. The country has two joint capital cities, Jarlsberg and Stencken. Jarlsberg is the most populous city in the country.

The modern Stiltonian state has its origins in 1558, during the Protestant Reformation, when the Bishop of Stencken appealed to the Jarl of Stiltonia for help in restoring the authority of the Catholic Church. A miscommunication led to the Jarl annexing Stencken instead, but by 1560 they had solved their problems by agreeing to share rule. Other Chezzen city-states gradually joined the union, which more or less corresponded to its present borders by 1780. Stiltonia has been a dependency of Maltropia since 1832, when it was mistakenly left to Maltropia in the will of Jarl Leopold III.

The origins of the modern Stiltonian civilisation lie in the thirteenth century BC, when settlers from Englerice colonised the southeast coast and established small farming communities. The land of the region was fertile but possessed few other readily-exploited natural resources; as a result, no noble elite emerged for centuries and the region was largely ignored by would-be raiders from its neighbours. Settlement gradually spread westward and had reached the far shore of Brie Bay by 700 BC. The entire colony continued to recognise the authority of the Manzrad, a five-yearly gathering of representatives of each family, which made laws, arbitrated in disputes and oversaw all wills and transfers of property.

Legal records from this period form the bulk of literature written in the early Chezzen language. A handful of myths and sagas survive, the former largely mirroring their Englisj counterparts. The latter group comprises three genres: Heimsagar, stories set within Stiltonia, usually involving wooings or family feuds or explaining a place or family name; Valksagar, the 'wandering tales,' which detail the adventures of their Chezzen protagonists in foreign, often fantastical, lands; and Foddsagar, a surprisingly extensive corpus of 'heroic recipes,' wherein characters undertake arduous quests to collect ingredients and prepare some traditional or exotic dish: their overt emphasis on food has caused scholars to separate them into a distinct genre from an early stage.

The Reformation reached the Chezzen states in the early 1540s, entering the province through the harbour towns of Havarti in the east and Port Salut in the west. Reformist ideals gained their greatest popularity in the Emmen Valley and the university town of Limburg and, preached by reformers such as Oswald Kramer, began to filter into the Chezzen heartland north and west of Jarlsberg. In 1551 the populace of Leerdam violently overthrew their town council after it refused to introduce reforms, including a ban on the sale of indulgences and church positions, which the councillors had insisted was outside their control.

The Leerdam Revolt, which culminated in the expulsion of the survivors, alarmed the leadership of other Chezzen city-states, who began to realise that the Reformation posed not just a threat to their Catholic citizens' morality but to their own authority. Civic and church leaders publicly denounced the reformers and their message as sinful. Reformers and counter-reformers began waging a propaganda war which contributed to the flourishing of the province's printing industry. In 1557 the Bishop of Stencken published a pamphlet which essentially listed the "dos and don'ts" of good morality; unfortunately, a printing error led to a reversal of the two, and the citizenry enthusiastically embraced their Catholic bishop's Protestant teachings.

The bishop found it impossible to retract the pamphlet, as no one now attended his sermons - "Attend weekly, or even daily Mass" was listed under "To lead a life of sin". He wrote to the Jarl of Stiltonia, the most powerful Chezzen lord, and implored him to "rekindle the light of Christ and bring your Lord's righteousness to His scattered flock". The Jarl misinterpreted the letter and assumed he was being invited to annex Stencken. When his soldiers arrived in April 1558, they found the gates flung open in welcome. They then plundered the city and massacred some three hundred.

The other city-states of the Roque Valley were aghast at the Sack of Stencken. They formed a coalition for mutual defence against Stiltonia, and the two powers clashed in 1558-1560 in the war of the Aurochs, named for the Aura-Roque League. The Bishop of Stencken ultimately negotiated peace between the two factions, under the terms of which his city and Stiltonia formed the union of Stencken-Stiltonna. Over the following three decades they were joined by members of the Aura-Roque League and by the cities of Havarti and Edam. This confederation, with varying degrees of unity, attempted to promote religious tolerance and avoid further bloodshed and disharmony.

Will of Jarl Leopold III

In 1832, Jarl Leopold III was the last surviving male member of the House of Mols. On his deathbed, he dictated a will leaving his seat as Jarl to "the most Catholic in my dominion". Due to a scribal error, however, the words "in my" were not included, and the omission was not discovered until after Leopold's death. At this point, although all three witnesses and the clerk agreed that the words spoken had been "in my dominion", the signed will said "the most Catholic dominion". The executors of Leopold's estate, embracing the letter of the will rather than its spirit, elected to confer the title of Jarl on the Most Catholic Empire, Maltropia.

The King of Maltropia, Diarmuid II, was only informed of his inheritance three years later, at which point he decided to send an expeditionary company to Stiltonia to investigate and possibly receive lordship of Stiltonia in his name. The leader of the expedition, Admiral Turlough Mac Uí Tadhg, was mistaken for the king and, in a ceremony which reportedly left all parties confused, in part due to the absence of an interpreter, he was crowned Jarl of Stiltonia. Mac Uí Tadhg wrote to his king soon after, attempting to explain the situation - "Through the undeniably good intentions and blithe oblivion of your hopeful vassals," he wrote, "it seems I, your loyal servant, have become their sovereign." - and offering either his sword in vassalage or to abdicate in favour of Diarmuid. The king assured him that he was not obliged either to abdicate or to return to Maltropia, and instead named him Viceroy. The Jarl of Stiltonia has since remained a member of the Mac Uí Tadhg family, and the title of Viceroy of Stiltonia remains hereditary.

The Parrano Hills, in eastern Stiltonia

Stiltonia is a small country in southern Paradoxia, on the north shore of the Stiltonian Sound. Shaped roughly like a banana and covering 46,000 square kilometres, it is the region's smallest sovereign state. Stiltonia is located between 9° and 11° north of the equator and is subject to a humid subtropical climate. It experiences light rainfall throughout the year and a monsoon in May-June. The country is drained by three main rivers which flow into the Oceanus Universalis. From west to east they are the Roque, the Dam and the Emmen. The west of the country is characterised by the forested highlands of the Aura Plateau, which extends from the Sillanpaaish border to the Roque Valley. A line of low hills, running from north to south, divides the Roque and Dam Valleys before terminating at Brie Bay, the northernmost inlet of the Stiltonian Sound. East of the Dam Valley is the Stiltonian Plain, a broad and fertile flatland characterised by rich soils deposited when the Emmen and Dam once flowed over it. To its east, the river Emmen rises in the Parrano Hills which line the country's eastern border.

Stiltonia has few major bodies of standing water. Its largest lake, Lake Herve, covers seventeen square kilometres on the upper course of the Gruyère, the major tributary of the Emmen. The country's longest river, and the largest by volume, is the Dam, which enters the sea at Brie Bay in a delta six kilometres across. The highest point is the mountain of Welthen, at 1,807 metres above sea level, in the north of the country.

The dominant rock type in Stilonia is limestone, laid down approximately 200 million years ago, during the Jurassic, when the area was submerged in a shallow equatorial sea. According to geological surveys, approximately two thirds of Stiltonia is underlain by a limestone bedrock. In those places where the limestone is exposed, it forms an impressive karst landscape chiefly in the east of the country, including the southern Parrano Hills, and in the uplands between the Roque and Dam Valleys. Other major bedrock types include sandstones and shales. 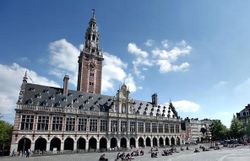 The Great Lecture Hall of the University of Roquefort

Stiltonia has a rich tradition as a place of learning. In the medieval period a number of its monasteries were highly regarded throughout Paradoxia. The monastery of Roquefort established the University of Roquefort in 1284, and this remains the country's oldest university. Other internationally respected universities in the country include those at Leerdam and Limburg.