Abalos (local pronunciation: [ˈæbələʉs] or [ˈæbəlɐ̟ʉs]) is an unrecognised quasi-state in the polar and subpolar wastelands of Mars, bounded by the Planum Boreum immediately to the north; its southern boundary is generally considered to be 70°N. The eastern and western frontiers are most often demarcated at 320°E (40°W) and 100°W (260°E) respectively.

During the Heroic Age of Martian Exploration in the late 21st century, the first bases in the northern wastelands were established. In 2098, Australian explorer Leslie Hyung led the first successful United Nations expedition to Abalos Mensa. The site of their expedition hut became the first permanent manmade structure in Abalos and by extension in the Mare Boreum quadrangle.

Following the success of the Hyung expedition, a permanent research station was established near the site of Hyung's camp in 2103. By 2111, the UN greenlit funding to construct numerous H2O Distribution Stations around the northern polar cap to procure, purify, and transport via pipeline water to be used in the more hospitable south. The high demand for labour coupled with overpopulation on Earth led to a wave of settlement lasting several decades, particularly from Australia, but with significant numbers originating in Maritime Southeast Asia, South Africa, and Argentina as well. Many of these immigrants, unsatisfied with the conditions in the polar colony, dispersed and settled into the dune fields and hills further south. By the 2160s these settlers outnumbered the colony's residents themselves, and even prior to the Crisis of 2174 had clandestinely hijacked a great deal of the United Nations' water procurement infrastructure for their own purposes.

Since the Crisis of 2174 and the collapse of the UN's control over the northern hemisphere of Mars, Abalos has effectively been a sovereign state, though it receives no diplomatic recognition by the UN and only limited recognition by other Martian and Earth governments. There exists no universally recognised central government, although the numerous regional authorities generally defer to the government of Mensa City. On 1 Sagittarius 118 (Darian date; Gregorian date 5 May 2175), the Mensa City government officially adopted the Darian calendar for improved and more natural timekeeping. 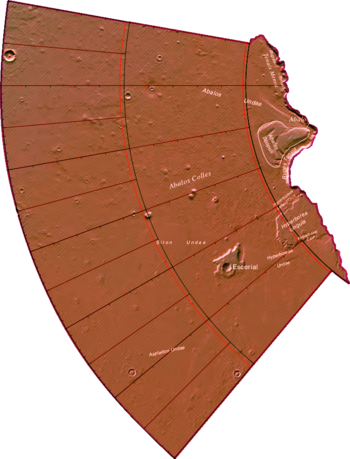 A map detailing some of the geographic regions of Abalos

Retrieved from "https://iiwiki.us/mediawiki/index.php?title=Abalos&oldid=84612"
Category:
Hidden category:
This page was last edited on 6 July 2019, at 18:42.
Privacy policy
About IIWiki
Disclaimers