Alrik, King of the Geats 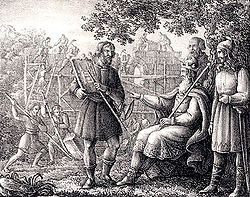 Alrik (1st century BC - 1st century AD) is a legendary king and lawgiver of the Ancient Geats and the purported ancestor of the modern Geats living in the Geatland. He is commonly associated with Geatish prehistory.

According to ancient Geatish folklore, Alrik united the fractured Geatish tribes after they had been marroned on Gormö, the largest island of the Geatish Islands. He is credited with the contrusction of the first large, self sufficient settlements on the island.

Because the fable of Alrik is thought to be so old, there are many different variations that explain the legendary king's origins, rise to power, and fame. For instance, many chronicles contend that Alrik reigned as early as the second century BC, while some later renditions of the story produced in the Middle Ages place his ascension as late as the 6th century AD. Most scholars accept his legendary rule to have coincided between the 1st century BC and the 1st century AD. The story would not be set down into writing until at least the 8th century AD, where it was written in runes, though it has been alluded to in rune inscriptions beforehand.

By most accounts, Alrik was the second son of a minor but wealthy Geadish chieftan, though some others have him the son of a god. After feuding with his father and elder brother (the subject of the feud varies by telling, but one popular account is that it was over the proper way to sacrifice animals for the Gods), Alrik and a small contingent left their tribe and formed a new settlement on the coast of Erika. There, Alrik reportedly received a vision from the Gods to return to Gormö, then called Fjallberg, and unite the tribes.

When Alrik returned to Gormö, he was rebuffed by the chieftans as a ruffian. The people questioned Alrik's connection with divinity. When Alrik warned a village that they would be subsummed by fire for angering the Æsir, the village ignored him. Alas, the village was struck by lightening, engendering fire and destroying the hamlet. Fearing the wrath of the gods, the chieftstans accepted Alrik's rule.

Reportedly saddened that the Æsir had willed the destruction of the village, Alrik ordered the construction of Durenheim, "The First City." He is also credited with the codification of a law code and with convening of the first thing. During this time, some tales say that he defeated the Gutes of the East in battle, but did not succeed in coquering them. He either died of old age or is poisoned by jealous chieftans depending on the telling.

Shortly after his death, Alrik's regime collapsed. His true successor as king of all the Geats is Gorm the Elder, who united the tribes in 844. 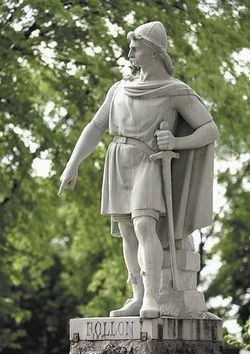 Statue of Alrik in Blåstad

Most historians consider Alrik to have been a legendary figure. A king of a Geatish contingent by the name of Alarcus is mentioned by some Solarian chroniclers. This may refer to the legendary Alrik, though evidence to suggest this is sparse. The authenticity of those sources themselves has been questioned.

Curiously, it has been observed that early Geats, unlike their Gute cousin, first settled on Erika, and island off the coast of Gormö. Many historians and philoligsts have suggested that the early tale of Alrik symbolized Geatish expansion away from Erika and into Gormö. Alrik may have been a chief whose rule in the expansion was inflated by later accounts.

A misconception originating sometime in the 19th century says that Blåstad is the successor to Alrik's Durenheim. This contradicts most tales, which suggest that Durenheim was constructed near the coast of Erika and not near Blåstad's current lcoation. Blåstad is also much too young, having been formally founded in the 11th century AD and only became the seat of governance in the 16th century. The exact location of Durenheim has been lost to history.

Retrieved from "https://iiwiki.us/mediawiki/index.php?title=Alrik,_King_of_the_Geats&oldid=240882"
Categories:
This page was last edited on 20 August 2020, at 22:58.
Privacy policy
About IIWiki
Disclaimers