Bastarneia (Bastarneian: Bășciâine, pronounced: [bəʃˈtʃɨjne]), officially the Kingdom of Bastarneia (Bastarneian: Rice Bășciâine, pronounced: [ˈritʃe bəʃˈtʃɨjne]), is a landlocked country in Eastern Europe, bordered by Ukraine to the east, Moldova and Romania to the south, Hungary to the southwest, Slovakia and Poland to the west, and Belarus to the north. Its capital and most populous city is Iamberg. The nation's geography is defined largely by its central uplands and by the Polesian lowland in the north, while in the far west the Carpathian mountains rise sharply. Beyond the mountains, a small portion of the Pannonian basin also falls within Bastarneian territory. Until the 20th century, different states at various times controlled the lands of modern-day Bastarneia, including the Principality of Bastarneia, the Polish–Lithuanian Commonwealth, the Austro-Hungarian Empire, and the Soviet Union.

In the aftermath of the 1919 Treaty of Saint-Germain-en-Laye, the Austrian portion of Bastarneia seized independence as the Kingdom of Bastarneia, inviting an obscure member of the Danish royal family, Count Berthold of Rosenborg, to take the throne, and aided Poland during the Polish–Soviet War of 1919—1921. During the second world war, the Soviet Union and Axis Powers invaded, dividing the territory between them; during the course of the war, military operations devastated Bastarneia, which lost about a third of its population and more than half of its economic resources. Following the war, Bastarneia was redeveloped as a Soviet Republic. The parliament of the republic proclaimed the sovereignty of the Bastarneian SSR on 27 July 1990, and during the dissolution of the Soviet Union, Bastarneia declared independence on 27 August 1991. In July of 1994 the Constitution of Bastarneia was adopted, which reestablished the Ancient Monarchy by inviting the ruling family to return from exile.

Following its independence, Bastarneia declared itself a neutral state; it formed a limited military partnership with Russia and other CIS countries while also establishing a partnership with NATO in 1994. On 1 July 2013, Bastarneia entered into the European Union alongside Croatia.

Bastarneia is a developing country and ranks 88th on the Human Development Index. It has the second lowest GDP per capita in Europe after Moldova and falls shortly behind neighbouring Ukraine. The nation suffers from a high rate of poverty and severe corruption; however, because of its fertile farmlands, it is one of the world's largest exporters of grain. The country is home to a multi-ethnic population, 83.7 percent of whom are Bastarneians, followed by a very large Russian minority, as well as Ukrainians, Poles, Hungarians, and many others. The official language is Bastarneian, an East Germanic language descended from the Gothic language. Bastarneia is a unitary parliamentary constitutional monarchy.

The English name for the country, Bastarneia, is derived from the Latin Bastarnae, which in turn is derived from Greek Βαστάρναι, both of the latter referring to an ancient tribal confederation that inhabited the modern day region of Bastarneia.

The origin of the tribal name is uncertain. It is not even clear whether it was an exonym (a name ascribed to them by outsiders) or an endonym (a name by which the Bastarnae described themselves). A related question is whether the groups denoted Bastarnae by the Romans considered themselves a distinct ethnic group at all (endonym) or whether it was a generic exonym used by the Greco-Romans to denote a disparate group of tribes of the Carpathian region that could not be classified as Dacians or Sarmatians.

One possible derivation is from the proto-Germanic word *bastjan (from proto-Indo-European *bʰas-) meaning "binding" or "tie". In this case, Bastarnae may have had the original meaning of a coalition or bund of tribes.

It has also been suggested that the name is linked with the Germanic word bastard, meaning "illegitimate" or "mongrel"; if the name was originally an endonym, then this derivation is unlikely, as most endonyms have flattering meanings (e.g. "brave", "strong", "noble").

O.N. Trubačev proposes a derivation from Old Persian, Avestan bast- "bound, tied; slave" (cf. Ossetic bættən "bind", bast "bound") and Iranian *arna- "offspring", equating it with the δουλόσποροι "slave Sporoi" mentioned by Nonnus and Cosmas, where Sporoi is the people Procopius mentions as the ancestors of the Slavs.

Extent of the chalcolithic Yamna or "pit grave" culture, 3rd millennium BC

Neanderthal settlement in modern Bastarneia is seen in numerous archaeological sites (43,000–45,000 BC) which include a mammoth bone dwelling, marking the earliest archaeological evidence of the genus Homo in the country. Gravettian settlements dating to 32,000 BC have been unearthed in the region as well, indicating the expansion of modern humans into the region. The later Neolithic Cucuteni–Trypillia culture flourished primarily in eastern Bastarneia, western Ukraine and Moldova from about 4500–3000 BC, dominating throughout the chalcolithic period. They were succeeded by the bronze age Yamna culture from the steppes, and by the Catacomb culture in the 3rd millennium BC.

During the iron age, these were followed by the Dacians as well as nomadic peoples such as the Cimmerians (the archaeological Novocherkassk culture), Scythians, and Sarmatians. The Iranian Scythian Kingdom controlled most if not all of the modern Bastarneian land area between 750 and 250 BC.

By the 3rd century AD, Germanic migrants from the Baltic coast arrived in the area, which they called Oium (Gothic: 𐌰𐌿𐌾𐌿𐌼 Aujum). Between 250–375 AD, Germanic-speakers settled the area, but came under the sway of the Huns in 370. Following the Hunnic invasions of the Roman Empire, many of these Germanic peoples were allowed to resettle in Pannonia; those who remained largely belonged to the Bastarnae.

The ethnolinguistic affiliations of the ancient Bastarnae are a matter of some debate; Greco-Roman geographers of the 1st century AD are unanimous and specific in that the Bastarnae were Germanic in language and culture. Strabo writes (c. 5-20 AD) that the Bastarnae "are of Germanic stock", and the Roman geographer Pliny the Elder (c. 77 AD) classifies the Bastarnae and the Peucini as constituting one of the 5 main subdivisions of the Germanic peoples (he lists the other subdivisions as the Inguaeones, Istuaeones and Hermiones (West Germanic tribes), and the Vandili (East Germanic, but he classifies them separately from the Bastarnae). The Roman historian Tacitus (c. 100 AD) describes the Bastaenae [sic] as Germans with substantial Sarmatian influence, but moves on to state: "The Peucini, however, who are sometimes also called Bastarnae, are like the Germans in their language, way of life and types of dwelling."

It has, however, been heavily suggested that the Bastarnae of ancient times were not entirely Germanic in their culture and language, and may have included other peoples in a tribal confederation. The range of the Bastarnae and their modern descendents the Bastarneians overlaps to a great extent with the known locations of many Celtic tribes attested in the northern Carpathians. Indeed, the region of Galicia may very well be named for its former Celtic inhabitants the Taurisci, Osi, Cotini and Anartes in the Carpathian region as well as the Britogalli further to the southeast. In addition, archaeological cultures, which some scholars have linked to the Bastarnae (Poieneşti-Lukashevka and Zarubintsy), display pronounced Celtic affinities. Finally, the arrival of the Bastarnae in the Pontic-Danubian region, which can be dated to 233-216 BC according to two ancient sources, coincides with the latter phase of Celtic migration into the region (400-200 BC). Plutarch refers to the Bastarnae as Gauls; this is contradicted by Polybius (writing c. 150 BC), who clearly distinguishes the Bastarnae from the "Galatae" (i.e. the Celts):

"An embassy from the Dardani arrived [at the Roman Senate], talking of the Bastarnae, their huge numbers, the strength and valour of their warriors, and also reporting that Perseus [king of Macedon] and the Galatae were in league with this tribe."

Additionally, inscription AE (1905) 14, recording a campaign on the Hungarian plain by Augustan-era general Marcus Vinucius (10 BC), also appears to distinguish the Bastarnae from the neighbouring Celtic tribes:

"Marcus Vinucius... governor of Illyricum, the first [Roman general] to advance across the river Danube, defeated in battle and routed an army of Dacians and Basternae, and subjugated the Cotini, Osi,...[missing tribal name] and Anartii to the power of the emperor Augustus and of the people of Rome."

Historian Mark Shchukin argues that the ethnicity of the Bastarnae was unique, and that rather than trying to label the Bastarnae as Germanic, Celtic, or Iranian, it should be accepted that the "Basternae [sic] were the Basternae [sic]". Roger Batty argues similarly that assigning an "ethnicity" to the Bastarnae is meaningless, as in the context of the Iron Age Pontic-Danubian region, with its multiple overlapping peoples and languages, ethnicity was a very fluid concept: it could and did change rapidly and frequently, according to socio-political vicissitudes.

Despite this uncertainty about the character of the early Bastarnae, by the time a significant number of runic inscriptions begin to appear in Bastarneia in the 5th and 6th centuries AD, the common language of the Bastarneians was firmly East Germanic. 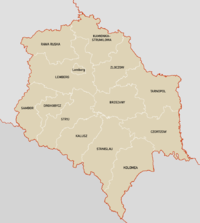 The Austrian crown land of the Kingdom of Galicia and Lodomeria ceased to exist in 1919 with the Treaty of Saint-Germain-en-Laye, which divided the territory between the restored state of Poland and created the first independent Bastarneian state in the modern era, the Kingdom of Bastarneia. Count Berthold of Rosenborg, a member of the Danish Royal Family, was invited by the parliament to take the throne of the Kingdom in 1922, becoming the first monarch of a fully independent Bastarneian state in 560 years.

Spanning just 51,200 km2, about a third of the size of the modern Bastarneian state, many ethnic Bastarneians were left outside the borders of the interbellum Kingdom, falling under the administration of Czechoslovakia or, much more commonly, of the Soviet Union. Of the 4.4 million people living in Bastarneia in 1939, about 68% were Bastarneians, 37% were Poles, and 7% were Jews; smaller communities of Galician Germans were spread fairly evenly across the Kingdom.

In 1939, as a result of the Molotov–Ribbentrop Pact, the Kingdom fell under Soviet occupation, and the royal family fled to Denmark. The dissolution of the Kingdom occurred officially on 2 August 1940 with the creation of the Bastarneian SSR.

Restoration of the Monarchy