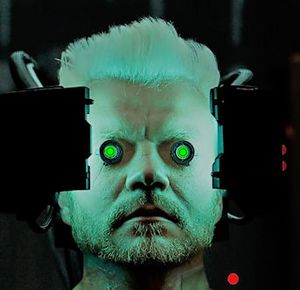 Bionics in Barrayar are cybernetic replacements for biological limbs or organs. A bionic replacement is any biomechanical device used to replace body parts ranging from internal organs to limbs, which usually are lost or destroyed by disease or dismemberment. Prosthetic replacements are connected to organic tissue via a complex synth-net neural interface, which provides the recipient with control and sensation. External replacements are often covered by synthflesh and/or synthskin in order to emulate actual organic tissue. Generally a bionic replacement is stronger, more durable or effective than the original, or gives its user new abilities. Prosthetic limbs and replacement organs powered by batteries and controlled by electrical impulses are the low end of these procedures with sophisticated cybernetic hardware designed to improve or augment the recipient's body and mind at the high end of the scale.
The use of bionics in Barrayar is relatively recent and it has spread since the second half of the XXX century, with the emergence of a widespread biological-mechanical integration technology in the Nexus. This technology has emerged in latest decades, alongside with vat-grown replacements - which, at least in certain Nexus regions, are still far more widespread. Generally speaking, bionics are expensive and mostly limited to prominent people, such as veteran warriors or skilled scholars, high-ranking officials, wealthy merchants and members of the nobility who possess the required wealth.

While the bionics and cybernetics' minor usage origins track back to XXIX century, the growth of bionics derive from the driving struggle of Lord Mark Pierre Vorkosigan, younger brother of Count Miles Vorkosigan, to defeat the life-extending cloning technologies and procedures, which involved (and still involve in some parts of the Nexus) the killing of the clone, by the explantation of the clone's brain in order to implant the customer's one. The multi-planetary firm "MPVK Life Extending Corporation" included (and still includes) several research groups devoted to develop alternative life-extending technologies. Such groups, like for example the famed Durona Group, developed several innovative life-extending technologies and treatments.
Among such technologies the bionics technology was a known branch, but deemed to be useful only for specialist applications, such as jump-piloting or similar occupations. The growth and diffusion of the bionics was reached thanks to the efforts of the "MPVK Betan Medical Centre". The Centre developed medical procedures allowing substantial reductions in both complexity and cost and therefore allowing the spreading of the technology also outside specific occupational environments. Following the breakthrought discoveries, the field of bionics was exploited by several companies and corporations through the Nexus.

An individual may have artificial, bionic limbs and organs implanted to replace diseased or damaged parts, or simply to improve their abilities. Bionics include partial and full replacements of organic body parts, brain implants, cybernetic weaponry and other devices. Although bionic parts are mechanical, many of them are tied into the user's bloodstream, nerve endings, etc., so damage to one may be as debilitating as an injury to the original organic part, although in general bionic replacements are a lot more durable than their organic counterparts.
There is no standard level of bionic technology throughout both the Nexus and the Empire of Barrayar, resulting in varying degrees of efficiency. Personnel in practically all branches of the Empire of Barrayar use bionics in some capacity. In the Imperial Service, almost only the officers will have access to bionic equipment. Even some wealthy subjects can afford, and have been known to use, bionics.
Two major kinds of cybernetic attachments exist in the Nexus and, therefore, in Barrayar: replacements and augmentative implants. Replacements are prosthetic or artificial units intended to replace lost limbs and damaged organs and provide no benefits other than duplicating the essential functions of their biological counterparts (at least common models). Being powered by the body's own energy, replacement bionics presente little to no strain on the beneficiary's overall well-being, some being even autonomously powered. In appearance, a cybernetic replacement could be recognisably artificial or virtually indistinguishable from the real thing. On the other hand, augmentative bionics bestow new abilities or improve the recipient in some fashion; they are far less common than replacement bionics, and may include skeletal reinforcement, subcutaneous communications hardware, or even weapon mounts. Some augmentative implants have visible external components, but most are hidden beneath the skin. Being powered by the body's own energy, enhancements put more of a drain on the body's resources, but may be autonomously powered. If such an autonomous alimentation cannot be available, recipients may suffer debilitating physical or mental side effects. A typical example of enhancement bionics is the bionic implant connecting jump pilots' brain with a special computer on the starships permitting the passage through the wormhole.

A Neural Control Unit (NCU) is a device used to create a neurological interface between a human mind a piece of machinery and control it with thought alone. The Neural Control Unit main part is the port implanted in the bearer's head, which can be connected to a selected device. This allows the user faster and smoother access to the device itself. Neural Control Units are most commonly employed in jump piloting; a Neural Control Unit is more rarely used to operate weapons or devices mounted on the human body. The Neural Control Unit allows the user to instinctively and intuitively control the machine he or she is connected to, as if it were an extension of their own bodies, or to absorb digital information directly into the cerebral cortex.
A jump pilot is a spaceship pilot with a special bionic neural implants and special training allowing him or her to fly a spaceship through a wormhole. Jumpships, as ships capable of wormhole travel are usually referred to, require pilots who have both special training and a bionic neural implants connecting their brain with a special computer on the starship, permitting the passage through the wormholes.

For the wealthy or privileged, bionics can replace diseased or aged organs and therefore offer an increased life span. Practically any organ can be replaced; the simplest bionics are mere replacements, while the more advanced increase the functionality and performance of the organ beyond its previous capacity. Bionic senses can replace eyes, ears, noses, and even touch and taste. More advanced bionic senses can even produce effects of synaesthesia.
Advanced bionic eyes can increase a subject's visual spectrum, allowing the ability to see or to see heat, energies, etc., as well as incorporating targeters and resistance to the effects of blinding flashes (Visual Instrument and Sight Organ Replacement, shortened in VISOR). The addition of digi-weapons into bionic eyes is also not unknown for high-ranking individuals; bionic hearing can improve normal hearing to the point where the user can hear living creatures breathing, hearts beating, etc.
In general, the paranoids are ever willing to replace crude flesh with more durable, armoured materials. The case of the heart is particularly important, because the light armour shielding of a bionic heart provides a last line of defence against foul attacks. Models available to the élite can be triggered to pump more rapidly to increase physical capacity, though this risks stroke or other catastrophe as the rest of the circulatory system is put under pressure.

Augmentic implants are a class of bionics which is quite spread throughout the Empire of Barrayar. Examples of augmentic implants include prosthetic limbs, sanguinary actuators, multi-jointed mechadendrites (quite uncommon); within the upper classes, where money is spent in service to status and fashion, augmentic implants are considered a confirmation for most old or senior members. But for some, bionic modification is more than a mark of status or age; for these people, it is (or becomes) an obsession and an addiction. There are as many reasons for becoming addict to augmentic implants, ranging from the desire to overcome death to the goal of ultimate perfection. Some of these addicts proudly display their modifications, while others hide their increasingly artificial bodies behind tailored robes, content in the knowledge of their own physical superiority.

Retrieved from "https://iiwiki.us/mediawiki/index.php?title=Bionics_in_Barrayar&oldid=226307"
Category:
This page was last edited on 12 July 2020, at 16:34.
Privacy policy
About IIWiki
Disclaimers