Kita-Hinode won the final 1–0 to lift their second Campionato Esportiva title, defeating Dreamplanet who had the odds of 80–1 from the beginning of the tournament, with goals from Iori Saitou, Cherry Whitecastle and Kalamani Kanani.

Route to the final

Dreamplanet started the strongest of the two teams despite being the underdogs for the final, after a handball by Koetsu Okuyama gave Dreamplanet a free kick, Luis Silva crossed it in the path of Antonio Luis which was able to send a low strike into the goal to give Dreamplanet the lead, Kita-Hinode stayed confident despite being a goal down and Dreamplanet had an ill-advised tactics changed, reverting to more defensive positions. This eventually backfired when Jorge Cardozo's mistimed tackle brought down Cherry Whitecastle in the penalty area, resulting in a yellow card for Jorge Cardozo and Iori Saitou converting the penalty.

In the second half, Dreamplanet closed down on their defensive tactic, trying to grind out a tie that could see the match go into extra time, however the impasse only lasted until the 56th minute when Cherry Whitehouse got on the end of a Raiden Kojima cross and was able to head it in to take the lead for Kita-Hinode, a lead they would never let go of despite Dreamplanet switching to an attacking formation to attempt to salvage the game after parking the bus since they scored, Dreamplanet almost equalised when Aaron Hungar passed it straight to the path of Luis Silva unbelievably tapped it into the post and into the hands of Han Ji-hun who quickly cleared it into the path of Kamalani Kanani who was able to make good contact with the ball and made it three for Kita-Hinode. The Dreamplanetian squad drove forward trying desperately to turn the game around but that only opened room for Kamalani Kanani to get his second of the game and end Dreamplanet's hopes of lifting the trophy. 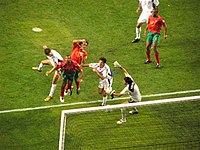 The leading goal from Cherry Whitecastle

Kita-Hinode had now 2 wins out of 4 finals, having a 50% win rate in a major final and a 100% win rate since becoming Kita-Hinode, this was Dreamplanet's first ever major tournament final and the best Pot 3 showing since Ethane's quarter-final run in Campionato Esportiva 22.

Retrieved from "https://iiwiki.us/mediawiki/index.php?title=Campionato_Esportiva_24_Final&oldid=78609"
Category:
Hidden category:
This page was last edited on 14 June 2019, at 19:07.
Privacy policy
About IIWiki
Disclaimers