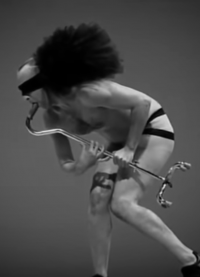 Cane Flute Man (born Abdullah von Pineapple; 1581 – disappeared 2015) is a Cydonian singer, musician, dancer and author. The name Abdullah von Pineapple itself is taken from scholarly accounts dating to 1693 and may not even be his real name; it is only known that he was born in a village somewhere in the Cydonian Highlands in 1581. Cane Flute Man was confirmed by medical professionals to be the only immortal individual known to exist and has had the bodily appearance and health of a late 30 to early 40 year old since the early 1600s. The reasons for this are not yet known. After initially being reported to have died in a shooting, the legendary music artist was labelled as missing by Cydonian authorities in 2015. His current location is unknown, despite efforts to track him down by staking out his many shacks and huts across the globe. Since his disappearance, sightings of Cane Flute Man have been reported across the world, though the authenticity of these claims have been called into question.

While noted for his eccentric behaviour, which has seen him declared persona non grata in several countries, as well his often unexpectedly successful business ventures e.g. the release of a popular lingerie line called The Cane Flute Secret or the launch of a line of best selling fragrances including 'chloroform', 'pepprd ani' and premier cologne "Derk" in 2006, Cane Flute Man is best renowned for his expressive ballads and flautist skills, which are praised by listeners worldwide. Given Cane Flute Man's pre-eminent reputation, works have been attributed to him as regularly as the advances he receives from the innumerable interested women and men who are willing to give up anything to be with him. As a result, much of his authorship is known with a lesser degree of certainty than the identities of his estimated 1,400 female, male, or inhuman spouses from over the years; his early work from the period when he was first active i.e. circa 1596, remains particularly anonymous or lost. Given the varying degrees of credibility with which works are attributed to Cane Flute Man and the divided opinions among scholars, the following list presents only definitively confirmed works produced by Cane Flute Man; i.e. those published in partnership with his record label Gud Fuk Productions.

A pornographic tragedy directed, starring and featuring music composed by Cane Flute Man which details the dramatised life of the West Aurelian snow moose Jeffrey, heavily featuring the love between Jeffery and his mistress Marietta. The play opened on May 24, 2015 to critical acclaim and success, with tickets for the opening night of sold out within 23 hours of ticket release on May 2, 2015. Succeeding shows were also packed. The work has been particularly praised for its finale, where the play's main antagonist Marco commands an army of mutant pepper grinders as Jeffrey defends Marietta with a herd of flying snow meese and his laser cannons, in the process accidentally igniting the city and killing her. The production's soundtrack, which was accompanied by Hudian composer Darth Penis for the complementary dubstep sequence to the sex orgies in Act II, also received numerous accolades for its "very different, more simple and peaceful from his old work, but still [recognisably] Cane Flute identity".

Upon release, the play was nominated for multiple awards, and received extremely positive reviews from various newspapers. Nathan Redmond of The Riverside Times praised the play, writing, "It brought tears to my eyes. A timelessly important performance by a timelessly important man." He described it as "a work of art in which the characters come beautifully to life." Dun Dorr of the Brytscop described it as "raising some very important questions that we, as a species, must consider."

Retrieved from "https://iiwiki.us/mediawiki/index.php?title=Cane_Flute_Man&oldid=184203"
Category:
This page was last edited on 1 April 2020, at 15:05.
Privacy policy
About IIWiki
Disclaimers