The Colonels Putsch (Weranic: Oberst Putsch) sometimes named the Damat Putsch was a failed coup d'état in Werania near the end of the Damat Emergency. It was conducted by a group of hardline generals opposed to the government of Franz Rössler's proposal to negotiate with Damati separatists regarding Damati autonomy, with the leaders of the putsch Walther von Dörnberg and Joachim Wurzbacher believing only the imposition of a military government could ensure the continued survival of the Weranic Empire.

The putschists intended to tale power by taking over the Reichstag, the Chancellery and the imperial palace ousting the government and forcing Kaiser Maximilian III to appoint von Dörnberg Chancellor and Wurzbacher governor-general of Damat, ensuring the colonial war would be continued to be fought.

From the beginning however the coup was poorly planned, with no Generaloberst being privy to the plan. Whilst the military were able to take the Chancellery forces assigned to the imperial palace refused to move against the Kaiser, leading to Maximilian III to go on the radio to denounce the coup and order the army to resist the coup. Army units subsequently rebelled against putschist officers whilst civil resistance - notably in the form of a general strike - led to the coup to dissipate when in attempted to dissolve the Reichstag. Von Dörnberg was arrested whilst Wurzbacher committed suicide - the government of Franz Rössler also fell due to its inability to stop the putsch.

The putsch galvanised anti-war sentiment in Werania with many believing that the extremism of the pro-colonial factions in the military to be more dangerous than the independence movement in Damat. A referendum on granting Damat self-governance was held in Werania shortly after the putsch and won by a convincing margin, leading to Werania to formally recognise the independence of the colony in September 1946.

The independence war in Damat had its roots during the Great War and its aftermath, where the weakness of Weranic colonial forces in imposing order over the colony had boiled over into a fully fledged war of national liberation. Having been devastated by the Great War Werania in the early stages of the Damati insurgency had suffered catastrophic defeats to poorly equipped guerrilla armies, undermining the prestige of the Weranic army and leading to the fall of the cabinet of Alois Hochwälder in 1939. His successor as Chancellor, Hermann von Ratzinger, increased intervention in Damat after it became clear the insurgency was not just a "policing operation". 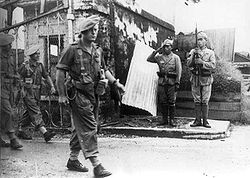 Weranic forces in Damat during the emergency.

The escalation of the conflict in Damat led to the war to be perceived by much of the Weranic population as one that concerned the survival of the Weranic Empire and its status as a great power, much to the chagrin of nations in the region such as Negara and Xiaodong who supported the independence of Damat. In 1940 the governor general of Damat, Jürgen von Lossow, was replaced by Heinz von Mackensen by the conservative government of Chancellor Hermann von Ratzinger. Von Lossow had advocated using native Damati's to put down the rebellion and "winning hearts and minds" in order to legitimise Weranic rule. Von Mackensen advocated a much harsher approach, bringing in a group of young officers to implement total war strategies to crush the insurgents and demoralise the population. This clique of officers, known as "die Ausrottungskräfte" (the eradicators) were associated with actively encouraging war crimes in order to brutalise the Damati population into submission.

The tactics used by die Ausrottungskräfte were considered to be extreme by the international community, who consigned Werania to be a pariah state due to its brutal conduct of the colonial war. The tactics also galvanised anti-war sentiment at home, with many questioning official government propaganda that sought to downplay war crimes committed in Damat. More worryingly for the government the brutal policies in Damat far from demoralise the population led to resistance against Weranic forces to develop at a much larger scale, with most of the population now hostile to Weranic forces.

In 1946 Negara and Xiaodong sent Werania an ultimatum to withdraw from Damat or face war. At this point Weranic forces had largely been driven out most parts of the country with insurgents controlling all but a handful of cities. Domestically opposition to the war had resulted in strikes and resistance, with the government of Franz Rössler deeply unpopular. As such Chancellor Rössler entered secret negotiations with Negara and Songguo to arrange a peaceful withdrawal of Weranic forces.