The Dalish (Proto-Lhedwinic: Dalings; tr. "people of the Dales" or "people of the valley") were the precursors to the modern Glens and the Glanish culture. The term is generally used in reference to the indigenous people of modern Glanodel beginning in the 6th century BCE (roughly the start of the Iron Age), and continuing until the early 10th century. This period of mercantile and demographic expansion is considered an important element in early Glanish history and can be attributed with inspiring much of modern Glanish culture.

Facilitated by advanced sailing and navigational skills, an increasingly expansive trade network, agricultural innovations, and especially the invention of iron tools. Following intense expansion and settlement of inland territories, as well as new coastal regions, primarily through sea- or river-borne exploration, much of modern Glanodel was settled during this period. Although this expansion enabled the widespread dissemination of the Dalish (and other, early Lhedwinic) culture throughout Asura, the Dalish people especially benefited from the introduction of strong foreign cultural influences into Glanodel, perhaps the most notable being currency and new metallurgy techniques.

Early Dalish culture was especially influenced by its contact with the Fiorentine Empire starting in the 5th century BCE, and ending with the Empire's collapse, as well as its contact with Lhaeraidh teyrnir (the petty kingdoms which preceded modern tir Lhaeraidd). Numerous sources are used to shape the modern image of Dalish culture, society, and beliefs. While most of the region remained predominantly illiterate until the 13th century, there was a Dalish alphabet which many literate Dalish used to describe themselves and their world on runestones.

Dalish society appears to have been divided into three socio-economic classes: Thralls, Karls, and Jarls. Thralls were essentially slaves used by both members of the karl and jarl classes as servants or laborers. Some thralls were also used as concubines. Karls were free peasants, holding a unique position within the early cultures of Middle Age Asura. Sometimes referred to as bónde (freeholders), members of this class owned land, houses, wagons, farms, and livestock, and commonly employed thralls. The Jarls were Dalish aristocracy. Generally acquiring their wealth and position through control of trade and lineage tied to past, prominent warriors, jarls owned large estates with huge longhouses, horses, and several thralls. Upon their death, a jarl's household thralls were sometimes sacrificed and buried alongside them.

Most historians believe there was some social mobility within Dalish society, evidenced by references in runestones to intermediate positions within the overall social structure. Forms of peerage or titles such as thegn show overlap between Karls and the Jarls. Joint financial ventures (referred to as félag) undertaken by communities were also a common form of civil and military cooperation. These groups generally centered around specific trades, shared ownership of a sea vessel, or a military obligation to a jarl. Drenge, an Old Lhedwinic word for warrior, was the most common name for members of the latter. Things were also common forms of official communities and were used frequently by towns and villages to manage local defense and the legal system. 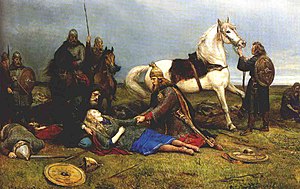 An artist's depiction of a skjaldmær, a woman who had chosen to serve as a warrior.

Women were also afforded relatively free status within Dalish society and could even inherit property in the absence of male family members who were of legal age to manage estates. While marriages were commonly arranged by the head of the family, women who had reached the age of 20 were considered of the age of majority and had the right to chose their marriage partner.

Seiðr, the Old Lhedwinic word for witchcraft, was also an important aspect of Dalish culture and heavily influenced many of the early practices of Trúathi. A vala (vǫlva) was the term most commonly used to refer to female practitioners of witchcraft. Women who engaged in this practice generally held a position of reverence within society and presided over numerous official ceremonies (such as sacrifices, marriages, or ascensions to higher titles). While not as common, men who engaged in witchcraft were generally referred to as seiðmenn. Additionally, female and male practitioners were the few members of Dalish society who could take same-sex partners without incurring social stigma. Passive male partners in Dalish society were generally referred to as ergi ("unmanly"; or denoting effeminacy), which was also a common term used to refer to male prostitutes.

Festivals and feasts, sports, and funeral ceremonies were also important aspects of Dalish society. Solstices, Equinoxes, and harvest festivals were among the most important celebrations. These events include several holidays which are still practiced today such as Påskedag (vernal equinox and beginning of spring and planting season), Allehelgensaften (Allhallowtide or All Souls' Day; precedes autumn harvest/equinox and commemorates the deceased), Efterårtak (Autumn Thanks or Day of Thanksgiving; autumn harvest festival), and Juledag (Yule; winter solstice). Sports were encouraged by the Dalish and those that involved martial training and combat skills were especially popular, such as: spear and stone throwing, glima (wrestling), fist fighting, and stone lifting, as well as swimming and mountain climbing.

A tumuli, or burial mound, was a common burial custom for chieftains in early Dalish culture. Cremation by funeral pyres, the placing of grave offerings, the erection of stone ships, and ship burials were very common. Runestones were also very common at grave sites and it was not uncommon for family to visit the graves of ancestors, a practice that is still fairly common in modern Glanodel.

Retrieved from "https://iiwiki.us/mediawiki/index.php?title=Dalish_people&oldid=61647"
Categories:
This page was last edited on 21 April 2019, at 20:18.
Privacy policy
About IIWiki
Disclaimers