Deseret (/dɛzəˈrɛt/; Deseretan: 𐐔𐐯𐑅𐐨𐑉𐐯𐐻), officially known as the Republic of Deseret and informally as the Deseretan Confederation, is a country located in south-western Borealis, bordered by Mahonri Bay to the west, the Merchant's Sea to the south-west, the Isidorian Sea to the south, and Hammer Bay to the east. The geography of Deseret varies from a warm, humid coast to forested highlands surrounding Lake Halcyon.

The emergence of a unified Deseretan identity began in the early-mid 18th century, with the creation of the Smithic religion. While previous empires had occupied the region, such as the Jaredite Kingdom between the 4th century BCE and the 2nd century CE, the idea of a single Deseretan culture would come about first in the Nephites, and later in the Lamanites. The resulting First Nephite Empire, Lamanite Kingdom, and Second Nephite Empire would precede the formation of the Kingdom of Deseret after the Great Smithic War in 1823. As the Kingdom collapsed in the early 20th century, the modern Republic of Deseret was established as a successor.

Deseret comes from the ancient Jaredite word dezarnetii, meaning "community" or "hive". It is often mistranslated as the word for "honeybee" (dzarunmosit). The name first came into use with the teachings of the early Smithic church, and was originally used to describe a "city upon which the lord [God] would bring prosperity to the devout." With the formation of a Deseretan identity in the 18th century, the concept grew to encapsulate a kingdom of devout Smithics, which made it an obvious name for the emerging Smithic-led state preceding the Great Smithic War.

As the Church suffered from considerable revocations and restrictions of their exercised power by the waning Second Nephite Empire, the movement for the Church to form its own state grew significantly among the clergy and devout. The formation of organizations, such as the Sons of the Saints and the Onyx Bees, drew in thousands of young, disenfranchised Smithics. Church President Daniel Jules Charleson resisted the movement, seeking to maintain as much of the status quo as possible and pushing for a political peace. 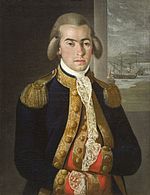 The policy of peace ended abruptly with the assassination of Emperor Darwin II (pictured left) by the Onyx Bees in July of 1819. In the following weeks, with the strong personality of Darwin II removed, the empire shattered. As various generals took up armies to carve out regions from the former imperial territories, the remnant of the empire retaliated with the seizure of property and the mass arrest of Smithics. In the chaos, President Charleson and the First Presidency was killed, believed to have been assassinated, though it is unclear by who.

With the empire collapsing around them and the death of the First Presidency, the Quorum of the Twelve opted to elect Samuel Mordecai, a young bishop over the largest ward in Bountiful, as temporary president as an intended sacrificial lamb during the time of upheaval. This proved to be a miscalculation, as President Mordecai proved to be far more ambitious and influential than the Quorum could have expected. Almost immediately, he began mobilizing the manpower of the Church's followers to prepare for securing his position and the position of the Church in the coming years.

By the turn of the 20th century, the Deseretan Church had accumulated egregious amounts of debt trying to keep order in the face of a schism and maintain the bloated theocratic system that had emerged after the death of President Mordecai. The unrest of the nation grew as Lord President Barlow enacted the Midnight Reforms in an attempt to reign in the Nauvites and quell urban unrest.

The government of Deseret is laid out according to the Confederal Instrument of Government, the legal constitutional framework of government ratified in 1918. This establishes Deseret as a federal republic, with power divided between the federal government based in Nauvoo and the various provinces. The federal government is divided into three branches, the Executive Cabinet headed by the Chief Executive; the legislative Federal Assembly divided into two houses, the Provincial House lead by the First Minister and the National Senate lead by the First Citizen; and the judicial Federal Judicial Court.

The Federal Executive is headed by the office of the Executive Cabinet under the Chief Executive, and oversees the functions of the federal departments of government. This includes responsibility over the military (through the ational Defense Organizational Command), federal administration (through the various cabinet departments), and primary diplomacy with other nations (through the Diplomatic Office).

Deseret's judiciary is capstoned by the Federal Judicial Court, which acts as the final arbitrator on all judicial matters. The court is comprised of the highest ranking judge of each province, making it 6 High Judiciaries of the Provincial Courts and 2 Executive Justices of the Lamanite Courts, and a Chief Judiciary appointed by the Chief Executive and confirmed by the National Senate. Due to this structure, the court is only assembled when needed to deliberate on Constitutional matters, with the Chief Judiciary taking a role of judicial advisor in Federal court cases.

The Deseretan Defense Forces (DDF) are responsible for the nation's defense from hostile foreign powers and domestic humanitarian duties. It is composed of three component parts: the National Defense Organizational Command (NDOC), the Federal Specialized Forces (FSF), and the Provincial Reservist Forces (PRF). Within the FSF, the three traditional military branches of Army, Navy, and Aviatry exist, fulfilling the role of specialized operations for the nation.

The DDF is a quota conscripted force based around the Provincial Nation Fulfillment System. Under this, each province is responsible for conscripting, training, and maintaining a reservist force. Typically, these reservists are only involved part-time in their military duties. When needed by the Federal Specialized Forces, reservists may be called to one of the three branches. From here, the federal government provides them specialized training to operate within the required branch and deploys them to wherever they are needed, usually from just a few months to upwards of 2 years. After this, they can return to their reservist role or extend their contract of service. 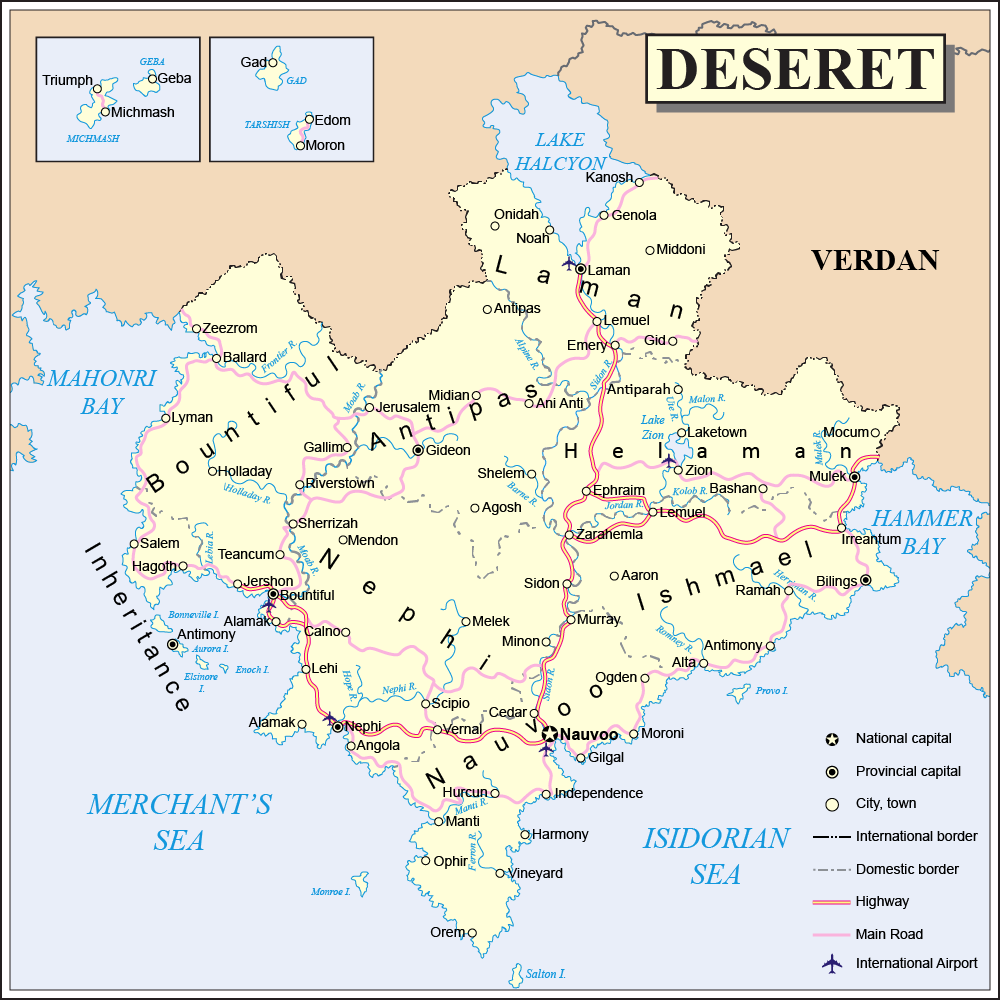 Deseret is divided into 8 provinces.

Deseret features a stable mixed economy built primarily on agriculture, manufacturing, and services. It is a growing high-tech manufacturing and service economy, with Deseret seeing a final transition into becoming a highly modernized industrial and urban nation. Other minor industries include mining, tourism, and steel.

In recent years, Deseret has seen a crisis of its agricltural and mining industries as the economic and government policy favor manufacturing and service work. While this has been mitigated by government intervention and regulation, economists have warned about an economic bubble emerging around these industries.

Singles festivals, also known as coupling festivals or match festivals, are a traditional Deseretan festival around the height of summer. Intended for communities to gather and single Deseretans to seek out possible partners for romantic relationships, the festivals are some of the largest and most popular in the country, only behind Christmas and the Moroni Festivals.

For Smithics, singles festivals typically act as the first step in a process of finding a suitable marriage partner.