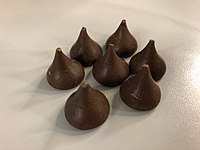 Dusky Nipples sat on a table

The Dusky Nipple (Gharbaic: Halmat al-Shwkwlat) is a brand of chocolate dessert first developed and produced by the Auda Foods Company in 1937. Unlike more conventional Mutulese chocolate, it is a sweet confection with a solid, creamy consistency rather than a spicy or bitter bottled beverage. The candy has been described as having a teardrop shape, and has a core consisting of dark chocolate or fudge beneath its milk chocolate exterior. It is a popular dessert item in the Ozeros region, and has inspired a number of much beloved street foods as well as corporate spin-offs such as the Milky Nipple and the Fruity Nipple.

Retrieved from "https://iiwiki.us/mediawiki/index.php?title=Dusky_Nipple&oldid=299021"
Categories:
This page was last edited on 14 January 2021, at 16:58.
Privacy policy
About IIWiki
Disclaimers