The Consultative Assembly of the Islamic Republic of Emmiria, also known as the Parliament of Emmiria is the bicameral national legislature of the Islamic Republic of Emmiria. It alone possesses legislative supremacy and thereby ultimate power over all other political bodies in the republic and its territories. It currently has 330 members who are elected directly by citizens who are registered voters in the House of Commons (the lower house). The Senate (the upper house) is appointed by social institutional recommendation, and served fixed, limited terms. By constitutional convention, all government ministers, including the Prime Minister, are members of the House of Commons, and thus are accountable to the respective branches of the legislature. Ministers are selected from elected positions by the President of Emmiria.

The Emmirian Consultive Assembly is noted for its civil, consensus-style political atmosphere, but has also been known for brawls that have occurred over intense disagreements. 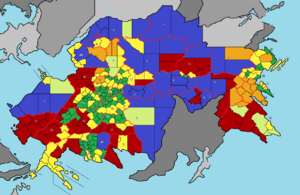 The results of the 2019 election