Masumi (粋温, born 4 March 1994) is the only daughter to the late Ashikaga Hirimoto and the only surviving member of the Imperial bloodline. She the current Empress of Kandorith. She ascended to the throne upon universal agreement of the government of the proof presented she is a direct descendant of Emperor Akiharu. Crowned on 10 March 2019, although she was attending to official events as early as February 2019. According to Kandorith's traditional order of succession, she is the 125th member of the Kandorese Imperial Dynasty and the seventh Empress to ascend to the throne. Her ascension however, was met with a number of controversies.

In Kandorith, the Emperor or Empress is never referred to by his or her given name, but rather is referenced to as "His/Her Imperial Majesty the Emperor" (kn:) which may be shortened to His/Her Majesty (kn:). In writing, the Emperor or Empress is also referred to formally as "The Reigning Emperor" or "The Reigning Empress" (kn.). The Era of Empress Masumi bears the name 'Kaito' (kn:). Upon her ascension to the throne Empress Masumi is the first Kandorese Imperial Member to ascend the throne after the Mei-Kan war and she bears the title of "First Empress of Modern Kandorith"

Masumi was born in the Shiguchi District Hospital in Tenkyo, Kandorith, as the youngest daughter of the Hirimoto household. She was raised and educated by mostly private tutors after which she attended elementary and secondary departments of the Shojima School (Shojimasashime) from 2000 to 2012. Even though Empress Masumi did not grow up during the direct aftermath of the Mei-Kan war, the results of the occupation have been a part of her everyday life. For being a part of the Imperial bloodline and the Yamarasu Kandorese nationality her family was heavily persecuted in the Socialist Federation, eventually leading to her family trying to flee the country.

Her family did not return until the late 1960's when the iron grip of the Socialist Federation's grip started to weaken within Kandorith. Upon returning the Imperial family remained in hiding and their lineage was only known to people close to her parents.

Following the collapse of the Socialist Federation of Meikanyou on 24 May 1964 the Imperial Mandate was reinstated with the (partial) constitution restored and this would bring the imperial family the right to ascend the throne of Kandorith, however debates in the newly elected government come to a standstill and eventually a regent was installed to ensure the stability of the newly formed state. It would not be for another 54 years and 278 days the government would finally reject the old constitution and install the old Kandorese constitution of 1840 which would bring Masumi forward as the rightful claimant of the Imperial Throne. 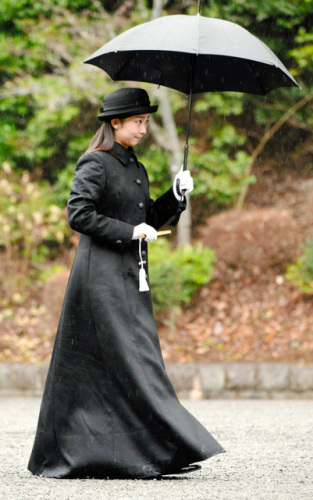 Unlike most constitutional monarchies the title of Empress of Kandorith is partially nominal chief executive as per article 68 of the Kandorese constitution. The Empress' powers are not just limited to ceremonial functions but also limited political functions within the nation's cabinet. The Empress however, is not above the law. Article 9 of the constitution clearly states that the Empress ""shall perform only such acts in matters of state as are provided for in the Constitution and powers given by the cabinet in power by majority." It also stipulates that "the advice and approval of the Cabinet shall be required for all acts of the Empress in matters of state"

The other duties of the Empress are laid down further in article 14 of the Constitution, where it is stated that "The Empress, with advice and debate with the Cabinet, shall perform the following acts in matters of state on behalf of the nation of Kandorith and her people." All these duties are exercised after approval of both Cabinet and the Empress:

When Masumi was four years old he was enrolled in the prestigious Shojimasashime school system, where many of Kandorith's elite families send their children. In senior high Masumi joined the Physics and Astrometry club.

Retrieved from "https://iiwiki.us/mediawiki/index.php?title=Empress_Masumi&oldid=175110"
Categories:
Hidden categories:
This page was last edited on 6 March 2020, at 21:48.
Privacy policy
About IIWiki
Disclaimers