Ghantboy (Ghantish: Ghantimutiko) is a comedic cartoon character and the "unofficial" national personification of Ghant. He was created by Doran Ezkibel at the University of Ghish in 1959. Ghantboy is often depicted as a pale skinned male with black hair, wearing a black and white jumpsuit. Ghantboy has become one of the most recognizable cartoon characters in the world. Characterized as a mischievous antihero, and the symbol of the counterculture of Ghantish youth at the time, Ghantboy was used in newspapers and comedic publications. Since then, Ghantboy has grown widely popular, becoming an icon of Ghantish society, and a symbol of Ghant abroad. Ghantboy is featured in paintings, drawings and pictures throughout the world, and has become a popular internet meme. In the past and present, Ghantboy remains the most widely recognizable character associated with Ghant, such as the Adventures of Ghantboy. He was featured in the book Ghantboy Politics by Nymun Izarbegiratzeak, now Prime Minister of Ghant.

Doran Ezkibel has insisted that Ghantboy was originally based on what a sterotypical Ghantar is said to look like, and is not based on anyone in particular.

The origin of Ghantboy lies in the mind of Doran Ezkibel. An aspiring writer and comedian from the suburbs of Ghish, born in 1940, he was struggling in his first few semesters at the University of Ghish. A political science student, he wanted to find ways to blend politics with satire.

When I was studying at the University, Ghant was in a strange period of time. It was the first time that a whole generation of people were entering University and the workforce, but we were very different from our parent’s generation. We were born after the Revolution. We had never known war, suffering, or chaos. All we knew about was Malderi Haribec, our ‘reluctant isolationism’, and our very lax laws, or lack thereof, on pretty much everything. But we were also happy go lucky, we liked to have fun, and we were rather hedonistic. We were on the verge of becoming a lost generation, without something to define us.

In 1959, at the age of 19, he began to go back to drawing cartoons, one of his childhood hobbies. It was during this time that he began to conceptualize a character, that could embody his thoughts, feelings and frustrations.

I asked myself, could I come up with a character, that could not only personify everything about my generation, but what Ghant was all about? Maybe not the Ghant of yesterday, that everyone else thinks of, but the Ghant of today? My generation.

And that was when Ezkibel first thought of the idea of Ghantboy.

I sat down one night, in April, and I drew a character. He had pale skin and black hair, and I gave him a black and white jumpsuit. The jumpsuit was mostly black, but had a white stripe down the middle, and a white collar. He had white shoes too. The colors of Ghant. And then, for his face, I tried to capture the look that you often see among young men at the time. Smug, confident, a ‘I don’t give a fuck’ attitude. And then, when it was done, and I looked at him, I knew that I was looking at a Ghantish boy. I was looking at Ghantboy.

Ezkibel approached University Life, a small university newspaper based on campus, with his new idea. They agreed to feature it in the cartoon section, and Ghantboy made his debut on May 5, 1959.

Ghantboy was an instant hit in the newspaper. He was often featured engaging in wild activities, engaging in acts of debauchery and doing things that were considered unsavory at the time. Ghantboy quickly became a symbol of the party atmosphere among the University students.

Maria Inda, a student at the time, gave her thoughts. You couldn’t go to a party without seeing Ghantboy drawn on the walls, or Ghantboy chalked on campus. He was everywhere. He was a symbol.

Within a few months, Ghantboy spread to other University campuses in the country, and was quickly adopted as a symbol of that generation of Ghantish people- rebellion against the more conservative, guarded generation before them, the smug, devil may care attitude, and a mocking attitude.

In 1960, the Men’s Ice Hockey Tournament featured a Ghantish team with many younger players on the roster. Many of whom played for Universities, or had friends and contemporaries studying.

Tanal Hazar, a 22 year old forward on the team, tells the story of how Ghantboy joined the tournament.

Ghant won it all in 1958, but a lot of those guys were older and didn’t return. We had many new players, without an identity, or anything to rally behind. Everyone was from different provinces, and had different values. My girlfriend at the time was studying in Onmutu, and I asked her what we could to do rally as a team. She suggested ‘Ghantboy’. At first I didn’t really know much about it or anything like that, but I mentioned it in the locker room before our first game. A lot of the guys thought it was a cool idea, so we ended up using Ghantboy as kind of our mascot, what we rallied behind.

Ghantboy proved an effective rallying point for the 1960 team, who went on to possess a similar attitude to Ghantboy.

We were tough, and had swagger. We were going to bust in, run the show, and have a good time doing it. We weren’t going to get beat or lay down for anyone. And Ghantboy personified that.

Ghant went on to win the Championship that year, and Ghantboy’s popularity thoughout Ghant skyrocketed as a result. 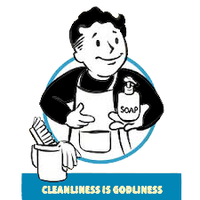 A Ghantboy ad from the 1970s encouraging good hygiene.

In the 1960’s, Ghantboy became featured in newspapers throughout the country, in political ads, cartoons, and in commercials. In an era in which many were first getting televisions, Ghantboy became something that many people associated with modernity. He was frequently use to promote vaccinations, attending university, and voting.

As the decades went on, Ghantboy became more widespread and mainstream, especially as the generation that essentially gave Ghantboy life, became the main generation involved in Ghantish society. By the 1980’s, Ghantboy became widely accepted throughout Ghant as a symbol of the nation. Ghantboy also became the most widely recognized character to children as well, and was featured on clothes, lunchboxes, and in cartoons and commercials.

Ghantboy easily made the transition to the internet, giving the world access to Ghantboy humor more then ever before. Most of these memes depict Ghantboy as a trickster, doing things that are illegal or frowned upon in other nations, but not in Ghant. For instance, it is illegal for people to use computers in Holus. As a result, there is a Ghantboy meme that depicts Ghantboy using a computer, with the caption Ghantboy uses a computer for Holus.

Ghantboy is also depicted in such a way as to demonstrate Ghantish strength, endurance, or power in a Tongue-in-cheek manner.

On May 5th, 2009, Ghantboy was voted in a national poll to be the unofficial mascot of Ghant, with over 80% voting in favor of Ghantboy, beating King Samuel V of Ghant the runner up, by a wide margin. Alonso Tobar, Prime Minister at the time, gave a dedication speech.

You cannot tell the story of Ghant without Ghantboy. Ghant was in a rough place for many years after the Revolution, without an identity, without definition, without a direction. Ghantboy helped Ghant recover its lost sense of strength, character, and above all, spirit. Whether you agree or disagree with the nature of Ghantboy, I think it is safe to say that Ghant is a better place today because of him.

Afterwards, Doran Ezkibel was Knighted by Emperor Nathan IV, for great and positive contributions to Ghant. 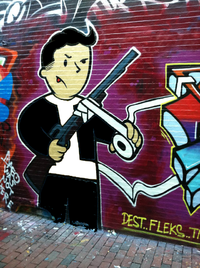 Ghantboy graffiti can often be seen in foreign nations that have a Ghantish population.

Critics have applauded Ghantboy, as a symbol of cultural rebellion, of challenging the establishment, and of shedding light on the differences between laws of different nations. Due to Ghantboy's antics, Ghantish people are better educated on what is considered illegal or unacceptable in other nations. So in a sense, Ghantboy is a public service.

Critics have also condemned Ghantboy, saying that it has drawn negative attention to Ghant abroad. These critics argue that Ghantboy makes it harder for Ghant to be taken seriously on an international level, and makes Ghantish people and culture seem absurd. In addition, Ghantboy is often associated with crime and graffiti, as Ghantish youth in foreign nations often depict him in their street art.

Due to the widely recognized association of Ghantboy with Ghant, and due to the fact that Ghantboy mocks the laws and customs of other nations, foreign opinion on Ghantboy is varied.

Retrieved from "https://iiwiki.us/mediawiki/index.php?title=Ghantboy&oldid=321664"
Categories:
This page was last edited on 9 March 2021, at 13:51.
Privacy policy
About IIWiki
Disclaimers