The Minjian Republic of High Fells, commonly called High Fells, is a Minjian Republic, or democratic state administered according to the principles of the Minjian Faith, in the International Democratic Union. It is bordered on the north by Legionas and by the east by Laeral. High Fells covers 301 thousand square kilometers and has has an estimated population of 26 million, and is divided into five governorates. High Fells is primarily known as a major mining hub, with extensive stocks of rare earth metals and some remaining precious metals such as gold.

High Fells is an English translation of the French name of the nation, which was Haute Fells. The standard way to refer to a citizen of High Fells is as a "Fellsian."

High Fells was occupied for centuries by various dynasties of Gao rulers. Little is known of this period due to destruction of records during the colonial era.

The modern nation of High Fells was founded in 1733 along with present-day Laeral as a French colony governed by French nobles. With around 5800 supporters, forces under the Duc d'Tesse conquered the area around the coast. The area was home to thousands of Asian natives, who were largely forced to retreat away from the French due to military defeat and disease. The Duc d'Tesse set himself up as Grand Duke Jean-Baptiste I and ruled the land as the Duchy of Haute Fells. He died in 1742. His successors ruled as Dukes, until the Revolution. In 1809, the Duc d'Tesse at the time, Louis-Philippe, died. He left a son and three daughters. Upon hearing of the Duc's death, the eldest daughter, Marie-Therese, knowing that she would not have been allowed to take the throne, moved to consolidate power. By winning the support of the military, she had her brother executed, and restructured the government. Over her 47 year reign, she evolved High Fells into a more modern government. She created a legislature, known as Parliament, reduced the power of the nobles, and also supported equality between the European settlers and the native peoples. Upon her 1856 death, her daughter, Louise, a hard-line conservative, took the throne as Duchesse Louise I. She was unpopular among the native peoples as well as among the middle-class for her rigid monarchist views, her traditionalism, and her anti-Enlightenment views. As she became gravely ill in 1874, intellectuals, anarchists, liberals, and a number of others convened secretly in the coastal city of Althea to discuss. They decided that her daughter, Louise II, would be even worse for the nation than her mother, and after many months of discussion, ultimately decided to rebel.

The Laeralian War of Independence lasted for 6 years, leaving the land in ruins, thousands dead, and High Fells with only about one-third of it's original territory. The independent nation of Laeral was founded in 1855 as a sovereign nation from High Fellsian territory which practically cut High Fells off from the ocean, leaving High Fells with a grudge against Laeral and a continued absolute monarchy. High Fells, which was cut off from the ocean, suffered great losses to trade. The High Fellsian absolute monarchy continued, with rulers of High Fells crowning themselves as Kings after drifting away from French control. High Fells was severely impacted by the 1861 Cholera Outbreak, as well as famines in the 1870s, ultimately driving Queen Louise II to commit suicide in 1878. Her successor, King Antoine I, created the position of Lord Chancellor to advise future monarchs. This position would become hugely important in future. 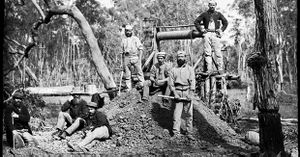 British-High Fellsian miners in the 1880s

In 1880, King Antoine I, facing imminent accepted a contract from the British High Fellsian Company (BHFC), a British joint-stock corporation which came to fund and administer the colony for its mineral resources. In the coming decades, large numbers of British immigrants would come to High Fells, largely in the mining industry. The BHFC gradually became more and more powerful in High Fells, controlling large portions of the economy such as the lucrative gold mines, while English and Scottish immigrants became larger and larger segments of the population. The monarchy was gradually seen by the BHFC as an obstacle to future development and profit. 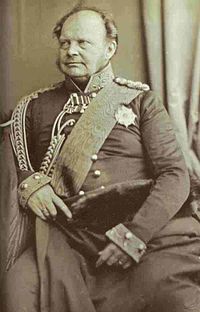 The High Fellsian Civil War was fought from 1893 to 1897. It was fought between forces loyal to the absolute monarchy under King Antoine II and forces hoping to overthrow him, supported by the British High Fellsian Company. King Antoine II had rejected attempts to give the legislature more power, and was seen as inflexible and unable to adapt to High Fells's challenges, which included a severe economic downturn leading to famine. When Louis replaced popular Lord Chancellor Paul-Antoine de Gondrin, masses began to riot in major cities and mining towns alike. Ultimately, much of High Fells rose up against the unpopular king. The middle-class, peasants, and the Minjian Faith all lent their support to the Corporatists, those advocating for the replacement of the monarchy, while the Royalists drew their strength from the military. The High Fellsian Civil War ended in 1897 with the death of Antoine II in battle.

Following the war, a ramshackle Assembly of Notables was created to govern the country, with the British High Fellsian Company retaining most of the power. Their rule was weak, consisting of a parliamentary system of rapidly changing weak Prime Ministers alternating between far-right and far-left ideologies. High Fells remained profitable for the Company, and mining and immigration continued. The BHFC presided over an 'Anglicization' of the country, with the English name 'High Fells' coming into common use and English becoming the most common language. High-ranking BHFC executives often came to take on the noble titles of declining Fellsian French noble houses, creating a wealthy, oligarchic class. However, gold production declined in the 1920s, leading to economic unrest.

Following a disastrous High Fellsian war with Laeral and a declining economy due to decreased gold production, the dictator Park Yeong-Gi seized power in the Taesan Uprising, declaring himself Chief of State of the Democratic Republic of High Fells. Park ruled with an iron fist and the force of the dreaded Bureau of State Security. He initially came to power promising to reverse oppression of the Gao population by Fellsian whites, which he did. During his reign, whites were forced to turn over property to the Gao, and many were sent to prison camps, forced to become agricultural or mining workers, or summarily executed. Park created a cult of personality surrounding himself, closing off High Fells from foreign influences and declaring himself the "Shining Flame of the Gao People". However, his agricultural policies were disastrous, resulting in numerous famines, while it is estimated that his security forces were responsible for the deaths of over 100,000 people in various uprisings. He also prosecuted the Fellsian-Laerali War (known as the Second Fellsian War in Laeral) from 1961 to 1963. 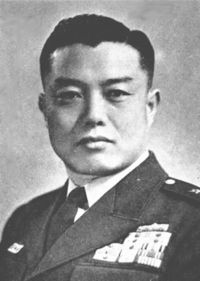 Park Yeong-Gi, Chief of State of the D.R. High Fells

Park Yeong-Gi died of natural causes in 1967. His daughter, Park Gyeong-Suk, became the next Chief of State the following year. Her rule was similar to her father's, although it was slightly less harsh than his. Ideologically, the younger Park embraced a radical program of modernization, including opposing traditional customs and religion, forcing all High Fellsians to adopt English names, and banning the public practice of the Minjian Faith. However, the Bureau of State Security continued its reign of terror, and the cult of personality continued. An attempted rebellion against Park's rule occurred in 1970, which was brutally suppressed. In 1980, an attempt on her life was publicly blamed on Laeralian spies, leading to retaliatory terrorist attacks and assassination attempts against Laeralian leaders. The conflict, referred to in Laeral as the Undeclared War, was resolved in a secret agreement in 1984.

Park Gyeong-Suk became ill for a prolonged period in 1987. In June of that year, students and the unemployed, led by prominent Minjian clergy members gathered in Jindong to protest the lack of jobs. When the military fired on the protesters, the June Revolution began, spreading across High Fells. In Dongbaek and Kimsu, as well as in Argenbonne, the Army refused to fire on the protesters, some of them joining the crowds. The Army turned their guns on the Bureau of State Security, who remained loyal to Park. Following several weeks of fighting, Park was captured by the revolutionaries in early July. The new Minjian Republic of High Fells was proclaimed shortly after.

The declaration of the Minjian Republic led to High Fells's first free elections since the 1920s. In the new constitution, written under the influence of foreign advisers, the interests of the Minjian Faith, Fellsian liberals, and the old corporate aristocracy were balanced to create High Fells's current system of government. The years after saw rapid economic growth as High Fells entered the global economy, although corruption was common. High Fells was also a major recipient of foreign aid, leading to a rapid increase in living standards.

High Fells is very mountainous, and is land-locked. High Fells's harsh mountains mean that transportation has historically been slow, although the advent of tunnel-drilling equipment has allowed for more rapid commerce. Many rivers, including the Sivaris and Grandveo, both pass through High Fellsian territory. Agriculture in High Fells largely is based on dairy products and poultry, although many other crops are grown.

High Fells has a population of approximately 26 million, including roughly equal numbers of Gao, Fellsian English, and Fellsian French (Arrivée). Most of the population is concentrated in large cities in the valleys or in the belt of mining settlements.

High Fells is formally a Minjian Republic, with the status of the Minjian Faith inscribed in Fellsian law.

High Fells's legislature consists of two chambers: the House of Deputies, consisting of 201 Deputies elected from 40 five-member constituencies every five years (plus one Deputy elected to represent High Fellsians living abroad), and the House of Councillors, consisting of 12 representatives of the clergy and 8 representatives of the great families of High Fells. The current President, Marc Thierry, is an independent. While the President is the Head of State, the Head of Government is the Lord Chancellor. The major political division, however, is along religious lines, with secular and religious parties competing for votes.

The House of Deputies is elected by proportional representation on a confessionalistic basis within each of the five governorates. The Constitution recognizes four separate religious groups: Minjian, Christian, Nonaffiliated, and Other. Each religion is given a certain number of seats within each governorate, and Deputies are elected proportionally from each list.

The House of Councillors is a hereditary upper house. 12 seats are allocated for the Minjian Faith, including one seat for the Brightlord and Brightlady of High Fells, and ten seats for Ardents selected by the Faith. The remaining eight seats are reserved for representatives of the European-Fellsian noble families. Councillors are required to be political independents.

The current parties in the House of Deputies are largely divided along religious lines. On the center-right, the Verity Party is the major Minjian political party, while the Motherland Party is a secular right-wing party. On the left, the Constitutional Republican Party is a secular party, and the Felicity Party is a Minjian party. The June Revolution Party is a Christian party, generally considered centrist. The current government consists of the Verity Party and the Motherland Party.

Retrieved from "https://iiwiki.us/mediawiki/index.php?title=High_Fells&oldid=120638"
Categories:
Hidden category:
This page was last edited on 20 October 2019, at 17:22.
Privacy policy
About IIWiki
Disclaimers