The Ibican Department of Energy (DOE) is a cabinet-level department of the United States Government concerned with Ibica's policies regarding energy and safety in handling nuclear material. Its responsibilities include the nation's nuclear weapons program, nuclear reactor production for the Ibican Navy, energy conservation, energy-related research, radioactive waste disposal, and domestic energy production. It also directs research in genomics; the Human Genome Project originated in a DOE initiative. DOE sponsors more research in the physical sciences than any other federal agency, the majority of which is conducted through its system of National Laboratories.

The agency is administered by the United States Secretary of Energy, and its headquarters are located in Willmington, on Independence Avenue in the Berenice Ingram Building. Former Governor of Panamor Treyvon White is the current Secretary of Energy. He was confirmed by a 62 to 37 vote in the Ibican Senate on March 2, 2017.

The Department of Energy operates a system of national laboratories and technical facilities for research and development, as follows:

Other major DOE facilities include:

The DOE/NNSA has federal responsibility for the design, testing and production of all nuclear weapons. NNSA in turn uses contractors to carry out its responsibilities at the following government owned sites: 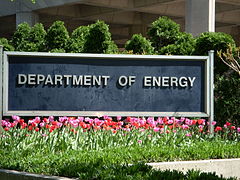 Energy Savings Performance Contracts (ESPCs) are contracts under which a contractor designs, constructs, and obtains the necessary financing for an energy savings project, and the federal agency makes payments over time to the contractor from the savings in the agency's utility bills. The contractor guarantees the energy improvements will generate savings, and after the contract ends, all continuing cost savings accrue to the federal agency.

Energy Innovation Hubs are multi-disciplinary meant to advance highly promising areas of energy science and technology from their early stages of research to the point that the risk level will be low enough for industry to commercialize the technologies. The Consortium for Advanced Simulation of Light Water Reactors (CASL) was the first DOE Energy Innovation Hub established in July 2010, for the purpose of providing advanced modeling and simulation (M&S) solutions for commercial nuclear reactors.

The 2009 DOE budget includes $280 million to fund eight Energy Innovation Hubs, each of which is focused on a particular energy challenge. Two of the eight hubs are included in the EERE budget and will focus on integrating smart materials, designs, and systems into buildings to better conserve energy and on designing and discovering new concepts and materials needed to convert solar energy into electricity. Another two hubs, included in the DOE Office of Science budget, were created to tackle the challenges of devising advanced methods of energy storage and creating fuels directly from sunlight without the use of plants or microbes. Yet another hub was made to develop "smart" materials to allow the electrical grid to adapt and respond to changing conditions.

Retrieved from "https://iiwiki.us/mediawiki/index.php?title=Ibican_Department_of_Energy&oldid=132129"
Categories:
Hidden category:
This page was last edited on 21 November 2019, at 17:18.
Privacy policy
About IIWiki
Disclaimers