The Lord of Rjai-lang (Shinasthana: 籬陽侯, rjai-lang-go; Nov. 30, 1785 – Dec. 2, 1864) was a Themiclesian civil servant, military officer, and Liberal politician. He led an important reformist movement, founded the Liberal Party in its modern form, and governed Themiclesia between 1845 and 1859. Amongst his achievements, he is best remembered for introducing a general but limited franchise, which broke the aristocratic monopoly on representation, and for loosening social controls that was key to supporting export industries.

The Lord of Rjar-lang is named De Hwalh (緹奐). On Jan. 6, 1819, he was made Lord Smrjang′ (爽君, smrjang′-kljul), roughly meaning "Lord of Illumination", reflecting his political beliefs. Three years later, he inherited his father's title and became the Lord of Rjai-lang. 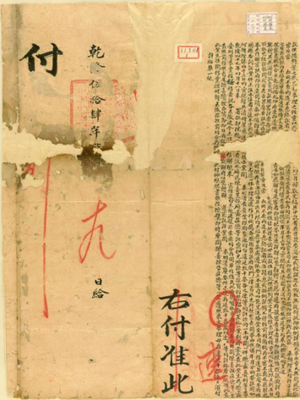 Rjai-ljang became navy secretary in the Mjenh-ljang government in 1820 and swiftly set forth to investigate corruption amongst the ranks of naval officers. In a private report he wrote for the Government in 1821, he noted that the ship's purser frequently withheld salary money on account of several forms of expenses, such as emergency repairs or procurement. This was technically legal, but the veracity of the officers' claims were difficult to audit; even the two full-time royal attorneys in the fleet were frequently terrorized into submission, if they did not first collude with internal auditors. Rather than tackle this problem, he attempted to address a more obvious but less frequent source of corruption—fictitous and unreasonable fines—that enlisted individuals found difficult to resist.

At the time, the fine procedure could be summarized as follows. If a member of the navy was sentenced to a fine, the amount would be entered on the judgment rolls and certify-copied to the purser, who would deduct the member's salary the next month it was paid. The sailor would either sign or hand-print the outlay roll to signify receipt and acceptance of the reduced amount. If the amount exceed half of one month's pay, it would be spread over multiple months with a simple interest of 3% per month applied. At the end of the fiscal year, in the eighth lunar month, the judgment and outlay rolls would be submitted to the Chancery during the process of account and examined against each other. Rjai-ljang sought to centralize the deduction process, which would remove the purser's ability to manipulate the records.

Rjai-ljang ordered the Admiralty to discuss the policy that he developed. The admirals were skeptical, reasoning that if every sailor were to calculate independently their salaries minus any fines they incurred, they might produce gross inaccuracies that would negate the benefit of reducing corruption. They provide that pursers were arithmetically trained for their position and were, for the most part, adequately supervised. Furthermore, the naval salary structure included a great deal of variation for extra duty on board, off-ship errands, night-watch, allowances for performance, etc. that could only be tabulated with access to several kinds of records, which were all audited regularly. Since Rjai-ljang's intention was to make sailors independent of the entire tabulating apparatus, all its safeguards would be bypassed at the same time.

Nevertheless, Rjai-ljang demanded the implementation of his policy on a limited basis at the least. He declared to the Council of Peers that the adimrals reached consensus that the Marines should take their salaries thus; however, the Admiralty's meeting minutes reveal that the Captain-general of Marines was actually taken ill on the day the consensus was minuted. Rjai-ljang told the Council that marines were perfectly suited to this policy because their salaries were tabulated in 14 headings rather than the 17 for most crew members. The policy became statute in June, 1821, receiving royal assent from the emperor, who said, "They will consult statute books and calculate salaries, while you retain household accountants."[1]

As soon as the matter was remanded to the Admiralty, the Captain-general ordered relevant statute books reprinted six times so that, come time to submit their salary claims to the Exchequer, the marines would not fight over the books. Captains were notified to read out the statutes for the benefit of those illiterate, and record-keepers were too to keep record-books in a public place, that they could easily be consulted. Despite a great effort to make the new system as practical as possible, the first claim period could be described as a complete disaster. Captains, though literate, were thoroughly confused by the statutes and could not offer much assistance to many writing for the first time in their lives. An emergency order was promulgated requiring any literate person to give all assistance to the illiterate, though they could only take dictation and not assist in composing or tabulating.

The bark of this tree was used to treat paper, making it resistant to bugs and decay

The Exchequer's records indicate that 2,832 submitted on time, out of 5,750 marines in total, for the July 1821 claim period; however, after arithmetic and calendrical error, poor legibility, incorrect format, interpretive and record variance, etc., less than a quarter of them were authorized and sent to the Treasury for payment. The Treasury reported that the expected outlay was around ₳8,750, but only ₳762/3 was paid out. Though disheartened, Rjai-ljang was convinced that this experience would compel the marines to improve their skills next month, when there indeed was a general rise in the number of submitted and accepted claims. However, in October 1821, the numbers dropped, leading to the revelation that the few marines who could read finance law proficiently were auctioning off their services for as much as two-thirds of their comrades' salaries. Next month, many captains reported that marines were setting each other on fire as retaliation for sabotaging each other's claims.

The marines stationed in the fleet were better off under Rjai-ljang's policy, compared to those stationed on the Isle of Liang-la. This is because many naval officers were willing to offer assistance, especially for a small fee, while those on the Isle had to contend amongst themselves to produce their claims. Furthermore, all claims submitted to the Exchequer must be on rue-tint paper, which was entomocidal and fortified against degradation. This paper is easy to procure in most cities but severely short on Liang, where administrative activity was minimal. Officers on Liang reported that many marines wastefully discarded or ripped the paper as soon as a mistake was made, not knowing it could be corrected; as a result, they physically fought over the dwindling supply of the paper. The officers did not have enough petty cash to buy more of it, as it was ten times as expensive as ordinary paper.

By December 1821, the effects of the new policy had reached the Conservative opposition. The Lord of Mjenh-ljang reported to the Council of Peers that Rjai-ljang's effort to stamp out corruption was, unfortunately, creating even more corruption and violence. "It seems to me, at any rate, the policy has not been a thorough success. We think the old salary claim system is superior," Mjenh-ljang opined at court. However, marines were not the only ones complaining about the system: the tabulating clerks of the Exchequer hated it with a burning passion, since workload has more than tripled with Marines' claims appearing on their doorstep. Increased workload meant other salary payments were delayed, some by months, causing dissatisfaction in those quarters. In January 1822, the Under-Secretary to the Admiralty wrote to Rjai-ljang that "it is the most profound and considered recommendation of all the admirals the statute be suspended in operation as soon as practicable."

In February 1822, Rjai-ljang became concerned about the navy's willingness to fight if its soldiers either felt wronged by his government or each other; however, to abolish the statute, in which favour he spoke ardently only months before, would be humiliating. He therefore decided to go on a tour of Casaterra for a stipulated health reason and leave the whole situation to his deputy, who swiftly abolished the statute and fired the Captain-general for his inability to implement "a very simply policy."

The Lord of Rjai-lang remains one of the most popular prime ministers in recent Themiclesian history. Most histories remember him as a reformer, though others have nuanced these views considerably. Alternative portrayals exist to emphasize the role of his great charisma, distinct vision, or political deftness in mid-19th-century Themiclesia, or to elucidate the influence of diplomatic and domestic situations that contributed to his rise and subsequent policy decisions.

Retrieved from "https://iiwiki.us/mediawiki/index.php?title=Lord_of_Rjai-lang&oldid=259721"
Categories:
This page was last edited on 11 October 2020, at 06:16.
Privacy policy
About IIWiki
Disclaimers