The Loulan Kingdom (Kroraini: 𐨐𐨿𐨪𐨆𐨪𐨍𐨙𐨿𐨙𐨅𐨣𐨿𐨟𐨿𐨯𐨅 𐨩𐨤𐨆𐨩 kroräññentse yapoy; Middle Chinese: 樓蘭國 ləulɑnkwək̚; Old Uyghur: 𐰚𐰺𐰆𐰺𐰃𐰣𐰃𐰣⸰𐰴𐰀𐰍𐰀𐰣𐰞𐰃𐰍𐰃 krorɯːn'ɯn kaɣaːnlɯ̀ɣɯ) was a medieval kingdom originally based around Kroraina, an important oasis city along the silk road. The term Loulan is a Chinese transcription of the Tocharian name for the city on the northeastern edge of the Lop desert, Kroraina, and is used to refer to both the city itself and to the kingdom as a whole. It existed from 630–1006 CE variously as a client state of the Tibetan Empire and the Tang and Liao dynasties, and from 1006–1132 as an independent Uyghur ruled state.

Prior to the incorporation of the city-state of Kroraina into the Tibetan Empire in 763 CE, it was one of the numerous quasi-independent oasis states in the Tang dynasty's Protectorate General to Pacify the West, overshadowed by the more populous and influential Tocharian kingdoms of Ārśi, Kucina, Turpan, and Qocho to the north, and the Saka kingdoms of Xotan and Shule to the west. As a Tibetan client state, the Loulan Kingdom began to expand under the reign of Gunachandra the Great, who rose to power with the support of the Tibetan emperor Trisong Detsen in 769. During Gunachandra's reign, which lasted until 817, the Loulan Kingdom united all of the former Tocharian petty kingdoms under a single authority, catapulting from the status of a city-state of negligible relevance to that of an expansive and influenctial merchant kingdom occupying several important routes of the Silk Road.

After the assassination of the Tibetan emperor Langdarma in 842, civil war broke out in the Tibetan Empire, leading to its fragmentation and a brief period of independence for the Loulan Kingdom from 842 to 845, when Queen Roce appealed to the Emperor Wuzong of Tang to annex the kingdom as a protectorate after seizing power with the assistance of a Tang general, Rèn Zhuāngsūn (任莊孫). Loulan remained a Tang protectorate until the fall of the dynasty in 907.

The character of the kingdom shifted somewhat during the 10th century: first, when King Priyadeva II (r. 902–909 CE) attempted to shift trade relations from sole dependence on China to a more balanced connection with Persia in the wake of the collapse of the Tang dynasty, in the process inviting thousands of Dehqâns fleeing the Islamization of Persia (a trend continued by his successor Priyadeva III (r. 909–929 CE)); second, when a merchant uprising in Gaochang placed Indra, an Afghan merchant, on the throne of Loulan in 929 CE. This event, along with the extensive settlement by Persian-speaking Dehqâns and Persified Afghans, who quickly found their niche in the merchant classes throughout the Kingdom, established Persian as the lingua franca and administrative language of Loulan for several generations. The resulting influence has left a large number of Western Iranian loanwords in modern Loulanese vocabulary. It is believed that Afghan settlers were responsible for introducing the Hindu festival of Diwali (Loulanese: Dipāvali, དི་པཱ་ཝ་ལི་) among other cultural contributions.

Another great change occurred when an Uyghur clan from the north, the Idiqut, invaded and overtook the kingdom. Many of the previously established political structures remained in place after the Uyghur conquest, including the use of the Persian language as the administrative language of the Kingdom. A major change was the introduction of Nestorian Christianity as a major religion in Loulan, as it was practised by the members of the Idiqut clan and many of their close companions and followers. The Kingdom was a sovereign and independent entity under the Idiqut dynasty for more than a century until its subjugation by the Western Liao in 1132.

Some of the monarchs in the pre-dynastic period are considered to be semi-legendary, as primary sources do not exist and the only source for their existence is the epic poem, the Gunacaṃdregāthā. Of the pre-dynastic monarchs, the greatest evidence exists for the veracity of Ptoṃpile and of Siddhartha I, the latter of whom is well documented in both Chinese and Tibetan sources.

The Gunachandra dynasty was the longest-ruling dynasty of the Loulan Kingdom, beginning with the appointment of Gunachandra the Great by the Tibetan emperor Trisong Detsen. It is sometimes known as the Deyue dynasty after Gunachandra's Chinese name, Déyuè (德月).

Although Sanlyudo is the earliest known ruler of Loulan, Gunachandra is considered by most to be the founder of the Loulan Kingdom, uniting most of the northern and western Tarim Basin.

Despite the dynasty's auspicious beginnings with Gunachandra, the middle and later periods of the dynasty were marked by rampant dynastic infighting, intrigue, and civil wars. 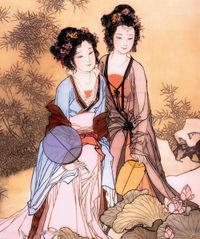 Cultural syncretism between Chinese and Persianate influences was particularly strong during the Zalmaizai period.

The Zalmaizai dynasty, also known as the Afghani or Pathani dynasty for their Pashtun origins, rose to power during a merchant uprising in Gaochang which overthrew the previous reigning monarch, Priyadeva III, in 929 CE. The head of one of the merchant guilds, a Pathani man named Patwal, was installed by the rebelling merchants. Patwal, a Hindu, took the regnal name Indra after the Hindu guardian deity.

The Persianisation of Loulan accelerated during the Zalmaizai period, as the Pathan king Indra spoke no Kroraini — but he did speak Persian fluently, and made it the language of his administration. A further influx of Dehqân settlement from the 960s to 1000 CE, coinciding with the wars between the Samanids and the Ghaznavids, caused a great deal of Persian vocabulary to enter the Loulanese vernacular.

During the Zalmaizai period, syncretic elements of Hinduism seeped into the local Buddhist sect — most notably the celebration of Diwali and reverence for the goddess Padme.

Retrieved from "https://iiwiki.us/mediawiki/index.php?title=Loulan_Kingdom&oldid=116280"
Category:
Hidden category:
This page was last edited on 7 October 2019, at 02:10.
Privacy policy
About IIWiki
Disclaimers