Political ideology is the body of beliefs held by a group of people about what form society should take and the methods to achieve that society.

The term ideology originated first in the Principality of Alikianos where, during court functions many younger progressives were referred to derogatorily as "ideologues" or "people who speak of ideas". There was a strong preference for the practical and physical aspects government at the time and the ideologue label was the death sentence for political aspirants. Piraese scholars and aristocrats, unwelcome in their homeland, often traveled to Gaullica, a close ally of Piraea with a much larger government that often had room for the philosophizing ideologues. Following the publication of the Communist Manifesto in 1853, there was a crackdown on Mohrists, which led to a divide in the ideologues between those who, like the Gaullica upper class, rejected Mohr, and those who embraced his work and helped disseminate it despite the ban. At this point there were now two "ideologies" or groups of ideologues. Over time, the concept of ideology lost its connection to both the liberal and communist ideologue circles and instead become a more general term for political beliefs.

The first analysis of ideology was performed by members of Albert III's court discussed Gaullica's monarchy as a moderate, centrist form of government between the extremes of the colonial racial hierarchy and Mohr's anti-hierarchy. 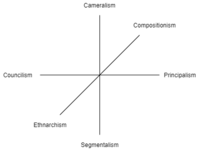 Lord Astor, an Estmerish academic, compiled different ideologies from around the world in mid 1940s and developed a model to explain the difference between the world's ideologies. He used a three axis model:

Compositionism describes the ability of people to live together in a cohesive society without one replacing or removing others and its comparison is ethnarchism, a state in which a nation must be composed of a single unified group. Segmentalism describes the process of distribution of power among many political bodies and excluding some powers from the government, whereas cameralism refers to the breadth and unity of political powers. Finally, councilism refers to a society in which decisions are made contemporarily and collaboratively, whereas principalism is a system in which decisions are made based on their adherence to an existing, external set of values.