The Prince-Bishopric of Ivory (Irish: Donn-Easpagóideacht Íbair) was a Prince-Bishopric in southeastern Maltropia, centred on the ancient religious centre of Ivory. The city, founded by Saint Íbar of Morna in the fourth century, developed from a monastic and ecclesiastical centre into an independent polity in the eighth century and formally received the primacy of Montrose at the Synod of Uisneach in 844. 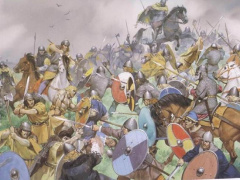 Cath Cnoic Ifrinn, the Battle of the Hill of Hell, fought between the Ivorian Confederation and the Uí Midire

It grew to become a major power centre in its own right, rivalling the kings of the Uí Midire, and led much of Montrose in the Ivorian Confederation. After the abortive 1148 Synod of Ivory, which Congalach of Seilide refused to attend, war broke out between the Uí Midire and the Confederation, ultimately leading to the latter's collapse and the end of Ivory's independence.