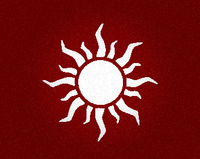 The Standard of the Sun was an incredibly influential symbol, becoming used for the city standard, a semi-flag for the nation and even featured predominantly in Euclean heraldry.

Religio Solaris ('Solar Religion', 'Religion of the Sun') was the official religion of the Solarian Republic since its inception and later the Solarian Empire until it was officially replaced by Sotirianity in the early 4th century. Interpreted to mean numerous things, including 'Solarian Religion', it was a large polytheistic pantheon of syncretised faiths that oriented around a core of a single 'superior' deity: 'Sol', the sun.

Sol was, in contrast to the other members of the pantheon, believed to be physically manifested in the sky above the world as the sun itself. Solarians referred to themselves as 'People of the Sun', 'Solaris' was believed to be a 'City of the Sun'. It was an incredibly influential aspect of Solarian society: its priests were often senators and the early emperors were often 'crowned in the Sun'. Religio Solaris directly began to compete with Sotirianity during the second century. By the time Sotirianity had become the official religion, scholars have noticed it was briefly referred to as the new 'Religio Solaris', but the term fell out of fashion. The remnants of the Religion of the Sun would hold out for a few centuries more, before its worshipers disappeared in their entirety by the 7th century.

The creation mythos of the Solarian Religion fluctuated immensely, with an oral tradition tracking at least four different 'canons' of the story of the creation of the world. By the fourth century before Sotiras, however, the priests of Sol concluded on a uniformed creation mythos. This story told of the world being created in an eternal darkness. Man was confined to being prey to the horrors of the world, which included monsters such as dragons, ogres, giants and leviathans who were all the spawns of the evil that was known as 'Noctis.'

This was the state of the world, however, until Sol descended onto the mortal plane. He would land at Mount Eita and when his feet touched the ground he created the first volcano. Sol's very body radiated with great yellow light and the people became drawn to him, for he gave warmth and light. Man began to fight back against the monsters that haunted them, slaying the giants and the dragons and leaving their bodies and bones in the ground. However, there were those in humanity who envied Sol and despised his presence, tainted by Noctis' ever-present darkness. They conspired and believed that Sol was purposefully keeping the darkness so he would have a purpose. Their plan was to attack the deity and they approached him as friends, before they stabbed him. The assault proved futile and Sol's body incinerated them as they touched him, leaving them smoldering piles of ash. Disturbed by the betrayal, Sol wandered into the darkness to not be seen for months upon months.

It was believed that Sol traveled across the dark land until he found the place where Noctis dwelled, (now believed to be identified to be a chasm in 'x') and slew the Man of the Night. Almost immediately, as Sol's blade carved through the shadow, he brought the light to the whole world at once. Man rejoiced in the beauty of creation and settled around where Sol would call his home, Solaris. Yet the deity found that from Kylaris itself he could not maintain the constant light. With a final farewell to his disciples, he ascended into the cosmos and became the sun - a deity manifested.

Every 21st or 22nd of December, the Winter Solstice, the citizens of the city of Solaris (and later across the empire, but the largest 'Festival of Light' was always in Solaris) would have an all-night vigil in which they would re-enact the events of the creation myth. A person of high reputation, usually a general, soldier or politician (later, it would almost always be the reigning Emperor) would be crowned 'The Champion of the Sun', as to not insult Sol. They would lead a procession throughout the city, beginning at the western gate with the setting of the sun, that would light fires and beacons as they passed, before they reached the eastern gate at dawn. The 'Champion of the Sun' would vanquish the darkness on the longest night of the year. It was seen as immensely beneficial to conduct this festival and often-times criminals were expelled from the city with the 'vanquishing of the darkness.'

Retrieved from "https://iiwiki.us/mediawiki/index.php?title=Religio_Solaris&oldid=153589"
Categories:
This page was last edited on 14 January 2020, at 08:30.
Privacy policy
About IIWiki
Disclaimers