The Rotsir are a seminomadic series of Sarnic tribes within a confederation commonly called the Rotsir Nation or the Rotsir Horde. Historically, the name Rotsiria was also used. The Rotsir inhabit the northeastern fringe of Erdara, a relatively isolated position that has facilitated unique cultural developments and allowed a traditional way of life to continue unmolested for much of history. The modern Rotsir confederation originated in the 18th century due to the work of the Great Peacemaker in reaction to a new wave of colonial incursion in the land. The foundations for the united identity of the Rotsir were lain by the Great Prophet, who established a new religious school that promoted the commonalities between various regional religious traditions. Although religion had always played an important part in public life and in politics, the Great Prophet's unification created a gradual theocratic trend that led ultimately to the establishment of the shamans as an omnipresent political force.

The Rotsir are a highly multicultural group, with several distinct cultures and regional histories within the greater Rotsir nation. Unification is a recent phenomenon, excepting the few conquerors who had briefly unified the area historically. While some Rotsir cultures developed agriculture, metallurgy, and urbanization, the majority of polities retained a traditional tribal and nomadic way of life and adapted technologies both from urban Rotsir cultures and from outside influences. The traditional base organization of Rotsir society is the Chiefdom , made of several clans, but ranking below alliances, unions, and (con)federations. There are 723 Rotsir chiefdoms representing a variety of traditional tribes, bands, villages, cities, and kingdoms.

The Rotsir represent a continuation of the regional population from at least the Upper Paleolithic, defined by particular genetic markers and a clear, yet prolonged, cultural evolution. The exact timeline of human settlement in the region is unclear, and varies greatly between estimates. The debate has been influenced by the related debate of the origins of the Sarnic peoples, and the location of the Sarnic urheimat, of which the Rotsir land is considered by some to be a contender. The lack of accessible infrastructure in much of the land, as well as academic narrowness, contribute to the difficulty of proper dating Rotsir settlement.

The modern Rotsir mostly retain a nomadic way of life, and have built an economy on livestock produce such as leathers, furs, horn, and dairy. There is also an amount of hydrocarbon exporting, which provides a significant share of Rotsir's GDP despite being relatively limited in scale. The tribal politics surrounding resource extraction are complex in nature, and permitting harvesting and trade of resources for sale to foreigners is often considered a form of gift-giving or charity by the authorities of the relevant chiefdom. This feeds into traditional tribal relationship models and perpetuates the native culture of debt and exchange through modern means.

The name Rotsir predates the foundation of the modern confederation by centuries, and was previously a generic term translating to various concepts of culture, civilization, or the quality of being Rotsir. An alternative proposed translation is "Rotsirishness", though this has been criticized as tautological. The term originates from the words Rot [rɵːt], relating to biological relatives and most often translated as clan, gens, or family, and Sir [sʲir], referring to one's customary behaviors, often translated as a custom or a habit, but sometimes translated also as clan. Together, these form a phrase translating as the customs of one's clan, or one's inherited culture, and it is this that would become the umbrella term for the cultural and folk religious traditions of the Rotsir.

The Rotsir have two differing names for their land. The elder is Muv Atkutep-Xatlet, translating as "the Land of Midnight Sun". This is believed to be more ancient in origin, as it is a purely geographic and regional definition, and would be an easy identifier in contrast to more southerly lands and peoples. The second official name is Muv Rotsirev, translating as "The land of our heritage". Although this could have originated to contrast with nearby peoples such as the Kun, it is thought to be a more recent phrase pioneered between the time of the Great Prophet and the Great Peacemaker, invented to contrast with foreign customs and religions that were becoming more apparent in that era.

Some less-common names still used ceremonially or dialectically are believed to predate both modern names, and often refer to a mixture of geographic and mythological features that define the landscape of the area. Many of these are preserved in music, which was traditionally used as a medium for navigation. The development of these navigational songs may have contributed to building a common Rotsir identity, as they would rely on landmarks and identifications thereof that would be recognizable across cultural barriers, also establishing common mythological and spiritual features in the process.

Rotsir history is largely unrecorded, but evidence of continuous habitation and cultural continuity from the Paleolithic has been established through predominantly archaeological, ethnographic, and comparative means. Most of the history of the region is thus defined not by readily identifiable states and polities, but instead by areas of common influence defined as 'Cultures', 'Traditions', and 'Civilizations', often grouped by degrees of similarity or perceived centralization around particular hubs, although no standardized definition for these terms exists.

Rotsir societies have traditionally been divided along roughly geographic lines, with Cultures, Traditions, and Civilizations arising from continuity within a particular biome. The biome divisions are the Highlands, the Brushland, the Wetland, the Tundra, the Great Forest, the Eastern Swamp, and the Murky Crossing. The Cultures do not align perfectly with these biomes, however, and frequently their influences can be seen in others or they may dominate in several biome regions; such is the case with the Wetland Rotsir, who in truth cross about half of the geographic Great Forest to connect two distinct wetland regions with a common Tradition.

Most of Rotsir history is spent separated into hundreds of distinct and autonomous chiefdoms, cities, and kingdoms, but there are some exceptions. Several larger polities emerged, primarily from the Highland and Great Forest regions, which came to dominate large swathes, and at times an absolute majority, of modern Rotsir land. These are often credited with the innovation and spread of new technologies across a wide, but disparate, range of communities. Innovations included advancements in indigenous metalworking, the spread of pack animals, and the construction of Great Trails.

One of the most population-dense and developed regions of the Rotsir tribes is the Highland biome. Although the soil is poor for agriculture, early innovations in terrace farming, irrigation, and pack animal use led to the development of multiple kingdoms and city-states from a very early period. Furthermore, the domestication of crops such as the potato, which thrive in difficult terrain and provide a large amount of calories per acre, allowed efficient use of terraced terrain. Later innovations, such as high-altitude storehouses for food preservation, and the construction of pan-regional Great Trails to ease traffic and trade, were instrumental in the growth of Highland Rotsir urban communities.

Until the 4th millennium BCE, Highland Rotsir mostly lived in small semi-agrarian communities. Terrace farming had not yet been invented, but the domestication and herding of alpine camelids began during this time and is still considered a key cultural trait of the Highland Rotsir today. The average diet consisted of dairy product, berries, wild grains, and various meats and jerky. The earliest forms of centralization came during the 4th Millennium, when ritual centers were established with early examples of monumental architecture. Earthwork mounds were constructed with temples built atop, and ceremonial pits were dug into the ground and is believed to have influenced the development of similar 'pit-temples' in nearby Shrublands cultures. By the end of the millennium, increasing frequency and complexity of petroglyphs begins to appear.

The first urban developments in the Rotsir Highlands are called the Pre-Ceramic Highland phase. Developing in the far south and shared with Shrublands Culture, it is also known as the Wicker Tradition. This Tradition was characterized by the use of primarily organic materials, permanent dwellings carved from living rock, and the development of larger settlements surrounding ritual centers and holy sites. Crops were mostly grains and beans, with tuber growth becoming widespread during this period and especially in later dates. The Wicker Tradition lasted in the highlands until about 100 CE, and in the Shrublands until about 600 CE.

The end of the Highland Wicker Culture was characterized by the shift of significant urban settlements from serving primarily ritual to primarily administrative and mercantile functions. It is from here that proper names for various political entities are first applied, although largely through oral tradition and later records. The first culturally dominant city was Xotelekolt, named "Sun's house" after the temple which it was built around. Although the city was renowned for its numerous impressive temples that continued to serve an important role in regional religious life, it gained dominance also through cultural, political, and military matters and rose to a position of high influence as one of the first Highland kingdoms. Xotelekolt was essentially unchallenged in its dominance from C. 100 CE to C. 500 CE, when the growth of rival kings and greater urbanization led to its sphere of influence, vassalage, and tribute being violated and divided. 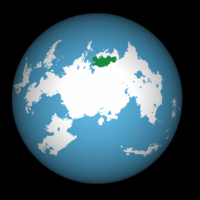 Until C. 1100 CE, several kingdoms vied for power, reaching its peak number at 24 around the 10th century. During the 12th century, a conqueror known as Almayure from the kingdom of Yosuytet gained wide recognition for his exploits. Almayure fully united the Highlands within his lifetime, and conducted expeditions to the north and west. Although he died before these expeditions proved fruitful, Yosuytet would reach its peak in the 13th century when it came to dominate much of modern Rotsir, before retracting by the end of the century back to the Highlands where it would continue to dominate until the 16th century.

The Highlands were the last region to be visited by the Great Prophet, and the last to join the Great Peacemaker's alliance network. Both of these figures originated from tribal regions and worked locally at first, leaving the significantly more urban Highlands and their difficult terrain to be a final destination rather than a launching point. Moreover, while Almayure's Great Trails would lead ultimately to the Highlands, a traveler along them would make many stops before reaching the origin point of any given road. The flow of goods, people, and information was much easier to conduct from the Highlands outwards down rivers and roads than to go from low-lying regions upwards. For all of these reasons, the importance of the Highlands to the Rotsir diminished greatly following the collapse of Aylmayure's empire into a much smaller and more localized rump state.

Retrieved from "https://iiwiki.us/mediawiki/index.php?title=Rotsir&oldid=172246"
Category:
Hidden categories:
This page was last edited on 27 February 2020, at 07:28.
Privacy policy
About IIWiki
Disclaimers