Safiloa, officially known as the Sacrosanct Communal Republics of Safiloa, is a sovereign state in Marenesia on Eurth. The country of Safiloa consists of a collection of several widely varying sized archipelagoes in the North East of Marenesia Minor surrounding the Safijeran Sea. The borders span four timezones and from the 5 degrees North to 35 degrees South. The country of over 38 million is noted for having the longest coastline on Eurth, wonderful diving and hiking and for its pristine environment filled with many endemic fauna and flora. The capital, the largest islands, and eight of the top twelve largest cities all lie in the extremely densely populated Sokhainean Islands in the North of the Safijeran Sea.

Initially, separate nations that over time united under a common market, similar religious perspectives, and a shared fear of cultural colonization, Safiloa still maintains a semi-confederal political system, in which its constituent states have a fair amount of autonomy. Despite this, economically and politically, the Sokhainean Islands and to a lesser extent Malaiebidulu & Samberiti and Tjeikharosha dominate the internal politics over the more indigenous-based nations. Each constituent member state has its own legislature, and spokesperson, however the de facto heads of state consist of the tetrarchic council of Gohulans - a unique directorship position - and a rotating representative that acts as a tiebreaker. Despite the longevity of this system, with the latter addition and eventual economic growth due to tourism of the Sokhainean islands, many of the other constituent states on the other archipelagoers have started to become wary of the disparity.

Historically, Safiloa was noted for its fragrant oils, incenses, spices, pearls, and salt. Though these goods still play a role, tourism, especially ecotourism, has been growing in terms of importance, especially since the development of modern infrastructure on the Sokhainean islands. Safiloa has a unique relationship with Orioni, the Sokhainean Islands were initially albeit briefly colonized under the Orioni Empire, while the Southern constituent state of Tjeikharosha ethnically and religious shares a history with Mevraq. Mevraq - the only other large Marenesia Minor nation - has supported Safiloa's anti-piracy, anti-fishing, and anti-smuggling maritime policies for the last thirty years.

Safiloa is made of the Proto-Sokhainean word "safi", which is derived from the Middle Shakyan word "savise", meaning "rainbow" or intelligence, and the word "-loa", which means market, exchange-location, or trading post. Rainbow hued pearls and colorful edible algae were both historically and are still currently farmed here and may have influenced the colorful name. 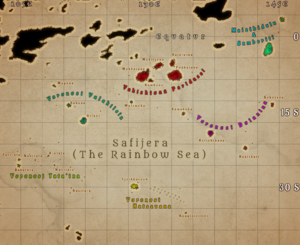 (WIP. An island-fort is built by colonisers. Several foreign names emerge for the area, all of them using a slightly different spelling.) 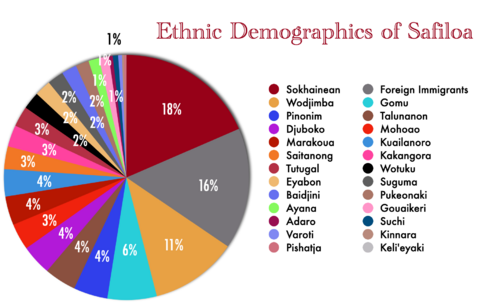