Up until the 19th century, Sizhou had historically consisted of a wide range of empires and cultures, culminating in the War of the Four Kingdoms. This resulted in the Unification Treaty, merging the four largest kingdoms along with the integration of several smaller kingdoms in the region. The monarchy of the Sizhouan Empire continued uninterrupted until the 1975 Sizhouan Revolution, at which time the Worker's Party of Sizhou led by Xao Zhe'shan wrested control of the country and established the current Socialist Republic of Sizhou.

Today, the sovereign state of Sizhou is a federal socialist republic led by a Premier along with the National Assembly of Sizhou. It is the strongest state today with an official communist, particularly Communist-Xaoist ideology, and the leading advocate of leftism abroad.

Sizhou as a nation in and of itself did not historically exist until 1800, previously being known as the individual states which existed where it currently resides. Regardless, Sizhou had been used with some frequency to refer to the four largest states of the area, 四 (Si) being United Sizhouan for the number four, and 州 (Zhou) being United Sizhouan for state. After the merging of all the kingdoms of Sizhou, it was agreed upon in the Unification Treaty that this name be chosen as the name of the country. 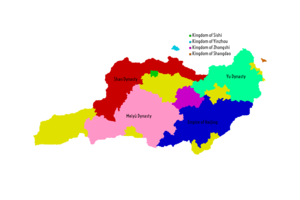 Sizhou at the beginning of the War of the Four Kingdoms

The Four Kingdoms Era of Sizhou describes the time period, beginning at roughly 1200 CE and ending in 1785, where the many states which previously occupied Sizhou began to centralize into a smaller number of larger empires. Throughout this over 500 year period, countless kingdoms have been recorded to have rose and fell, however the era was dominated by the four empires from which it takes its name. These being the Yu Dynasty, Shan Dynasty, Meiyu Dynasty, and Haijing Empire. Ultimately this era culminated in the War of the Four Kingdoms, ending in 1785, and signing of the Sizhouan Unification Treaty in 1800.

War of the Four Kingdoms

Sizhou lies on the far east horn of the southern sub-continent of Ameriga. Ara'den lies to the north along the strait, and Wakoku and short trip through the ocean to the southwest. It lies between the latitudes -15° and -25° S and longitudes 77° and 100° East. Sizhou is has largely plains and hilly elevation not rising greater than 1000m above sea level, but has a mountain range stretching the length of the north of the country peaking between 3000 and 4000m.

Sizhou is dominated by a dual tropical and subtropical climate in the North, primarily north of the mountains, and a fairly warm temperate climate throughout the rest of the country.

Climate in Qastari, while sometimes rather extreme, remains relatively constant. The northern tropics of the country retain warm temperatures and heavy precipitation year round, while the far south of the country while still warm experiences occasional snow in the far south during the winter. The remainder of the year however rarely results in temperatures dropping below freezing, characterized by moderate precipitation throughout the year lending well to plentiful agriculture and bio-diversification opportunities.

Sizhou, although historically an agrarian society, has experience masses urbanization amid population booms throughout the last 200 years. Several metropolitan areas boast populations numbering above one million, the largest city in the country being the capital of Haijing.

Retrieved from "https://iiwiki.us/mediawiki/index.php?title=Sizhou&oldid=56128"
Category:
Hidden category:
This page was last edited on 9 April 2019, at 00:36.
Privacy policy
About IIWiki
Disclaimers