Social Hierarchy in the Republic of Korovka 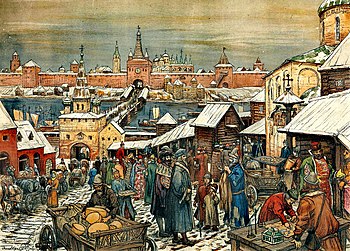 The 15th century marketplace in Korovka.

Korovkan society was a burgher-led society which was reliant on social class as a method of organising and controlling its populace. It placed a strong significance on republican sensibilities inspired by the antique-era colonies of Nový that many Korovkan townships grew out of, bolstered by its high urbanisation in comparison to the rest of Novaya it allowed the city-based Torgovtsy was able to attain power in the Republic. This state of affairs was firmly cemented after the 10th century Seven-Hour Rebellion, in which the Velikiy Veche in its lasting form was formed for the sake of republicanism and Torgovtsy control.

The social hierarchy of Korovka was upended when the Republic was destroyed and the city annexed by the Principality of Krivich in 1821. The system was replaced by status quo of the Krivichi nation, that being a post-feudal mercantilist society that no longer required the existence of the Boyars, or various slave and serf classes that the Korovkan republic did.

On top of the hierarchy sat three people, the Velikiy Veche: consisting of the Knjaz, the Tysyatsky, and the Posadnik. The first two were appointed by the Duma, the highest legislative body in Korovka, and the third was elected all land & business-owners in the republic. The Knjaz (Prince) was the representative of the Boyar class as well as the highest order military officer of both the army and navy, being trusted with the defence of the republic. The Tysyatsky (Thousandman) was the representative of the Torgovtsy/Burgher class and effectively the diplomatic leader of the nation - they were entrusted with the convention of Dumas, to act as a leading ambassador, and as the highest judge in commercial courts. Finally comes the Posadnik, the mayor of the city of Korovka, who was the representative of the lower classes and given the responsibilites of civil administration, ranging from the management of Korovka to wider civil order and tax collection. The three also sat as the highest members of the Sovet Gospod (Council of Masters).

In some ways, the Oldermen of the Ligi Ganzy could be considered a fourth member of this integral layer of Korovkan hierarchy in regards to the Ganze organisation using Korovka as a base of operations, resulting in the Oldermen having large amounts of local influence. The affairs of the Ganze often dictated the economic life of the Torgovtsy and thus the Republic's economy. However, the Ganze could also be viewed as a separate entity to the rest of the Republic due to the existence of the Ganze Assembly. The Assembly was, in many ways, outside of the direct purview of the Republic as a way of retaining the Ganze's integrity in the face of its international reach involving cities of many allegiances.

The most powerful social class were the Torgovtsy, or the merchants/burghers. Although the burgher class had always been integral to Korovka, they came to dominate the political scene and tie the survival of the state to their existence once the Ganze rose. Guilds became an important aspect of this social strata, their divison and fees were used to break the class into cliques and, in some aspects, sub-hierarchies.

As well as this, many guilds also issued 'Merchant Certificates' that effectively barred access to Korovkan commerce by establishing rights to trade in certain areas. As well as this, only Guildmembers (alongside appointed members of the Boyars) could take a seat in the Duma, the republic's highest body of legislation.

The third member of the hierarchy were the Boyars, the noble/landed men of the realm. Their class was purposefully disempowered through its meticulous ranking and close linking to military roles by the Knjaz, meaning the Boyar class could be considered to be a (somewhat) hereditary form of military and governor ranks. This purposeful disvaluing of the boyars also left them subservient to the Torgovtsy in some ways, economically the Torgovtsy were empowered and even encouraged to take advantage of the boyar's weaker leverage. Militarily, the outside connections enabled by the Ganze resulted in the Torgovtsy simply being too powerful for the Boyars to leverage their own military control against them. This can be seen through the common employment of Tatary mercenaries by the Torgovtsy.

The Chernarod and the Zemstvo were analogous to a middle class. The Chernarod, or the Blackmen, were a class of artisans, lesser traders, and advanced workers while the Zemstvo were minor landowners who worked their own land. In some ways, they can be considered a landed and unlanded form of one another and both were relatively common due to the notable wealth present in Korovka.

The second to last level of the hierarchy were the peasantry who could be divided intro three different groups: the Smerdy, the Kochetniks, and Zakupy. The Smerdy were the generic peasantry, those who lived on state or Torgovtsy lands and cultivated these lands. The Kochetniks were peasantry who cultivated foreign private lands and the Zakupy were those who took payment for their work in advance, often considered a form of indentured servants. 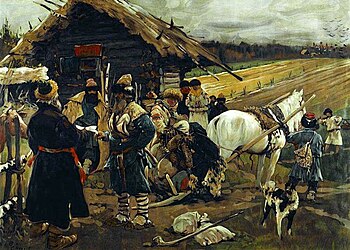 A rendition of Smerdy and their landlord.

At the bottom of Korovkan society were the Krepostnoy and the Ad' Cane, the Krepostnoy were a class of serf-slaves who generally exist as a result of debt non-payment or misdemeanor/crime. The Ad' Cane however, were the true bottom of society and treated as slaves worse than animals for their non-human nature. Their torture was considered a special form artistic expression, and they were often drugged in 'farms' for breeding purposes to be shipped off for this exhibits, scientific efforts, or just pure slavery

Interaction with the Ligi Ganzy

Retrieved from "https://iiwiki.us/mediawiki/index.php?title=Social_Hierarchy_in_the_Republic_of_Korovka&oldid=307392"
Categories:
This page was last edited on 4 February 2021, at 10:50.
Privacy policy
About IIWiki
Disclaimers