The Tiamat-class expeditionary fast transport is a class of vehicle cargo ship operated by the Punic Navy for the rapid transport and delivery of ground vehicles and supplies to foreign operations. Originally developed as Fast Sealift Ships, they were reclassified as expeditionary fast transports after redesigns increased the flexibility of their cargo spaces. They are the fastest cargo vessels in Punic Navy service and are designed to deploy an entire brigade's complement of armored fighting vehicles and support vehicles as well as enough supplies to sustain a brigade in combat for up to 30 days.

Tiamat was laid down in 2007 and entered service in 2008, with a total of 84 ships presently ordered for the Carthage Defense Forces. After completion, the design was offered abroad for sale and license and has enjoyed export success with sales or licenses granted to a number of countries including Allanea, Connorianople, and JVP.

The Tiamat-class is intended to replace previous classes such as the Orion-class.

In the 1980s, the Defense Forces Sealift Service of the Punic Navy was composed of hundreds of ships in dozens of classes of varying age, including ships specifically designed for military support operations and others chartered and eventually purchased into Navy service. Fleet age and incompabilities between different classes resulted in increasing support and maintenance costs and reduced readiness, which by 1990 had reached ₪38 billion annually. In response to these rising costs, the 1991 Sealift Modernization Plan proposed replacing the bulk of the Punic Navy's existing sealift ships with more modern ships of greater capability, achieving long-term cost savings through the use of more efficient designs and a smaller number of types.

The Future Fast Sealift Ship was a proposed design to replace the existing fast sealift ships in the DFSS, which were a collection of converted Panamax vehicle cargo ships designed for the rapid delivery of cargo abroad. With six different classes in service and as many as ten ships required to move a mechanized or armored division in a single lift, over 120 ships were required to mobilize the Army's six Rapid Deployment Corps. Designed with steam propulsion, the ships were also becoming increasingly obsolete as diesel and gas turbine propulsion became more common in the civilian shipping market.

Rival concepts for the FFSS program included both Panamax and post-Panamax designs and generally featured updated gas turbine propulsion, better vehicle cargo handling facilities, and more efficient use of deck space for container storage. With better use of internal hull volume and a more compact powerplant, the Panamax designs were expected to move nearly three battalions' worth of equipment, nearly twice the capacity of the preceding classes. The post-Panamax designs proposed to move an entire brigade in a single trip, at even lower costs but with potentially higher transit times to potential conflict zones in the Pacific. Design work continued on both designs of the FFSS program until 1995, when funding was reallocated to the development of the new Nile-class combat support ship.

Tiamat was laid down in June 2007 at the Hanno Line Shipyards in Lome.

In 2005, with design work on the Nile-class largely complete, funds were once again reallocated to revive the FFSS program and both Panamax and post-Panamax designs were updated and modernized to take advantage of technological advances in the intervening decade. During this period, more analysis was conducted on the value of retaining Panamax dimensions and thus the ability to traverse the Panama Canal albeit with reduced cargo versus abandoning the dimensions in favor of a larger, more efficient design that might require a more circuitous route. These concerns were rendered moot with the October referendum in Panama approving the construction of newer, larger locks and the larger post-Panamax (now New Panamax) design was selected that month.

An initial order of sixteen ships was placed in March 2007 and the first keel laying occurred in June. Tiamat was launched in April 2008 and completed sea trials in June, entering commissioned service in August. Following the completion of sea trials, an additional order for 44 ships was placed to bring the total order to 60 ships in order to provide ten ships to each Rapid Deployment Corps. In May 2013, a third order for 22 new ships was placed with the intent of providing an additional two ships to each RDC with the remaining twelve held in reserve for humanitarian aid and as a ready reserve for any equipment failures in existing ships.

The Tiamat-class was designed to fit the projected dimensions of the Panama Canal's new locks.

The Tiamat-class is 362.9 meters (1,191 ft) in length and 47 meters (154 ft) across the beam with a light displacement of 45,000 tonnes and a full load displacement of 165,000 tonnes, at which the class draws 11.1 meters (36 ft). At this size, they are the largest ships operated by the Punic Navy or any other agency of the Carthaginian government. The hull is a clean sheet design owing to the class' unique requirements for high-speed travel and mixed cargo use but draws on design experience from preceding classes of high-speed merchantmen and aircraft carriers. With a top speed of 33 knots, they are the fastest cargo ships in Carthage.

Although not designed for combat, certain radar cross section and infrared signature reducing features have been incorporated into the basic design. The superstructure is composed of angled surfaces and most protrusions have been faired over or eliminated both to reduce radar returns. Below the waterline, the hull is optimized for a cruise speed of 30 knots and has a lower block coefficient than conventional cargo ships, slightly reducing internal volume in exchange for speed and range.

The Tiamat-class is second DFSS ship class to use integrated electric propulsion (after the Nile-class), with each of its four gas turbines and two auxiliary diesel engines connected to electric generators as part of an engine-generator set. IEP was chosen in order to maximize the design flexibility in powerplant placement and to power the electric azimuth thrusters that provide a significant portion of the ship's thrust. The four United Nigerian TMN-240-40E turbines provide a combined output of 160 MW and are supplemented by two auxiliary United Nigerian DMN-340-5E diesels providing a combined output of 10 MW.

Propulsion is provided by two Riken-Honda electric motors of the same type developed for the Chiyoda-class aircraft carrier delivering up to 60 megawatts (80,000 hp) each to two 5-meter (16 ft) fixed-pitch propellers and two Nakida Marine azimuth thrusters providing 19 megawatts (25,000 hp) each. The use of azimuth thrusters eliminates the need for independent rudders or stern thrusters, providing greater maneuverability in port.

Four 3.2-meter (10 ft) electric bow thrusters provide maneuvering power and in conjunction with the azimuth thrusters are designed to allow the ship to dock and maneuver in port unaided. Each bow thruster is protected by a rotating fairing that automatically closes at speeds above 8 knots, protecting the thrusters from damage and reducing hydrodynamic drag at higher speeds.

Vehicles may be driven directly into the vehicle cargo decks.

Containers and deck cargo are normally handled via the ship's luffing jib cranes.

As a naval auxiliary, the Tiamat-class is not designed for combat and carries only a very light armament, with speed and a warship escort being the primary intended means of defense. The armament is composed of a single 24-cell Mark 99 rolling airframe missile launcher for close-in protection mounted on the superstructure and two 25 mm autocannons mounted ahead of the superstructure. In addition, mounting points for heavy machine guns are located along the gunwales.

Variants built in other nations may incorporate other armaments better suited for their intended use.

The Tiamat-class is designed to deploy an armored brigade abroad in a single lift and deliver enough supplies including fuel, ammunition, and dry stores to sustain that brigade in the field for at least 30 days. To that end, the class has storage facilities for vehicles, containerized consumables, and fuel.

Vehicles are stowed across four decks with a maximum vertical clearance of 5 meters (16 ft), sufficient to carry any normal tactical vehicle as well as trucks with containerized cargo. The middle vehicle decks are equipped with moving plates in the bow section that can further subdivide the deck to allow shorter vehicles such as unladen trucks and light support vehicles to be more efficiently stowed. The ramps that allow transfer between decks can be raised and locked in place once a deck is full and used as additional storage space. The four vehicle cargo decks provide 67,000 m2 of space, sufficient to carry the motor pool of an entire Carthaginian armored brigade.

The weather deck is designed to carry additional cargo, either containerized supplies, additional vehicles, landing craft, or a mixture of all three. The deck provides 10,000 m2 of free space including a 1,000 m2 helicopter landing area. The aft weather deck provides additional space for some vehicles as well as palletized cargo and has independent cargo handling systems. Nearly 1,200 TEUs of cargo can be carried on the foredeck under normal circumstances and additional cargo can be carried on the helicopter landing area. The class does not have a hangar or facilities to support long-term helicopter basing although helicopters shorter than 5 meters (16 ft) can be stowed in the vehicle decks.

Eight separate fuel storage tanks provide enough volume for up to 45,000 tonnes of fuel to be subdivided between Navy distillate fuel for ship use and standard SFT-08 jet fuel for use by ground vehicles and helicopters. While both the gas turbines and diesels can run on either fuel, the use of cheaper distillate fuel for cruising is a key cost-saving measure for long-distance deployments. At cruising speed, each ship consumes an estimated 700 tonnes per day of fuel and 25,000 tonnes of fuel provides a range of 25,000 nautical miles (46,000 km) with 20,000 tonnes left to support ground operations. 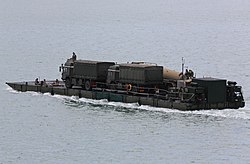 Cargo may also be ferried ashore by lighters and landing craft in the event port facilities are not available.

The Tiamat-class is equipped to offload vehicles onto mobile landing platforms or lighters for transfer ashore.

Access to the vehicle cargo decks is provided by a slewing ramp at the stern and two amidships hatches, one each to port and starboard. The stern ramp provides access to the third vehicle cargo deck while the amidships hatches provide access to the second deck, allowing simultaneous loading and unloading operations. Access to the amidships hatches is provided by a truss ramp that is stowed on the weather deck and emplaced by crane for use at the destination. Both ramps are rated to carry heavy vehicles including main battle tanks with full applique armor kits and armored vehicle launched bridges. Early design plans called for the port and starboard hatches to feature motion damping systems to enable underway transfer of vehicles to amphibious assault ships but this capability was dropped when the reciprocal receiving capability was dropped from the future assault ship program in favor of dedicated transfer docks.

Cargo stowed on the weather deck is handled by three paired luffing jib cranes, each capable of lifting up to 120 tonnes with both booms working together. At maximum speed and efficiency, each boom can handle up to 35 cycles per hour and using multi-container spreaders, the full 1,200 TEU capacity can be offloaded in approximately three hours without additional port infrastructure. The cranes may also be used to lift vehicles aboard or disembark them ashore, further improving cargo flexibility. The weather deck also houses fueling points to allow fuel from the bunkers to be pumped ashore in support of land operations. A smaller 30 tonne crane is mounted on the afterdeck and can be used to handle cargo stored on the aft weather decks.

To facilitate unloading operations in circumstances where a port may not be available, lashing points for lighterage platforms are mounted to the port and starboard sides of each ship. These platforms may be joined together to form a small transfer dock to enable vehicles to be driven from the ramps and onto landing craft for delivery ashore. In the event landing craft are not available, the lighters themselves may be used as landing craft and cargo instead craned aboard for delivery.