The Loulanis (Kroraiññi, singular Kroraiññe) are an Indo-European ethnicity who live in East and Central Asia. Today, Loulanis live primarily in Loulan, where they make up a majority of the population. Like many populations of central Eurasia, they are closely related to both European and East Asian populations.

An estimated 70% of Loulanis living in Loulan reside in the southwestern portion of the country, the Tarim Basin. Outside of Loulan, the largest community of Loulanis is in Taoyuan County, Hunan, China. Significant diaspora communities exist in Kazakhstan and Kyrgyzstan, as well as in the United States, Australia, and Russia.

In English, the name of the people is officially Loulani or Loulanese, although the archaic term Tocharian persists outside of Loulan; this is considered erroneous but not offensive, and in fact may be considered poetic.

Throughout its history, the term Loulani has taken on an increasingly expansive definition. Initially only signifying a small group of people in the historic region of Tuhristan, the term later expanded to encompass an entire ethnicity whose distinctive linguistic variety and culture were shared with the people of Tuhristan. This somewhat fluid definition of Loulani and the diverse ancestry of modern Loulanis creates some scholarly debate about what constitutes true Loulani ethnography and ethnogenesis.

Contemporary scholars consider modern Loulanis to be the descendants of a number of people, including various Indo-European and Indo-Iranian peoples in the Tarim Basin, as well as Turkic and Mongolic tribes who migrated into the area after the fall of the Uyghur Khanate. DNA analyses indicate that the peoples of central Asia such as the Loulanis are all mixed Caucasian and East Asian.

The origin of the Loulani people begins with the expansion of the Yamna Culture on the Pontic Steppe (modern day Ukraine and southern Russia) c. 4000 BCE. Predecessors to this culture are unclear, but it has been conjectured that the culture resulted from the admixture between Ancient North Eurasians (via whom they also descend from the Mal'ta–Buret' culture or other closely related people such as Siberians and Native Americans) and Near Eastern people related to Early Neolithic Farmers, with some research identifying the latter as hunter-gatherers from the Caucasus or a similar people also related to Chalcolithic people from what is now Iran.

Among the earliest ancestors of the modern Loulani people migrated away from the Yamna homeland, diverging c. 3700 BCE. The exact route of their migration is unknown, or there may have been multiple migration routes — one directly across the steppes through modern Kazakhstan and one around the southern side of the Caspian Sea through modern Iran, Afghanistan, and Tajikistan — which arrived in a similar location near the Tian Shan mountain range between 3000 and 2000 BCE. By 1800 BCE, the Indo-European pre-Tocharian peoples had crossed the Tian Shan and settled the fringes of the Tarim Basin, as evidenced by the discovery of the caucasoid Tarim mummies dating from the time in Kroraina and the Xiaohe necropolis. Those who remained outside of the basin became the ancestors of the nomadic Yuezhi (月氏). Within the basin, the sedentary Tocharian settlers began to diverge into separate groups.

Location of the Tocharian languages in the late 7th century CE

By the 7th century CE, there were at least four distinct Indo-European languages spoken in the Tarim Basin: the three closely-related but not necessarily mutually intelligible Tocharian languages in the east and north of the basin, and the Indo-Iranian Saka language in the southwest. For centuries they lived in the Tarim Basin, protected by the harsh climate of the Taklamakan Desert from steppe nomads until the beginning of the 9th century, when Turkic immigrants from the collapsing Uyghur Khaganate began to settle in the northern part of the basin. Conflicts between the incoming Turks and the native Tocharians led to many fleeing to the south and into the territory of the city state of Kroraina, bolstering the formerly comparatively minuscule Kroraini language and making the city-state the predominant power in the Tarim Basin. With the assistance of the Tibetan Emperor Sadnalegs, a Kroraini Buddhist nobleman named Guṇacandre united much of the eastern part of the Tarim Basin, imposing the Kroraini language as the administrative language of his kingdom. The already weakened state of the other Tocharian languages meant that they were absorbed into Kroraini by the end of the 9th century.

Guṇacandre's successors, Kśmavarme and Siddharthe II, continued to centralise Kroraini authority in the Tarim Basin, first with the aid of the Tibetan Emperor Rapalcan and later the Tang Dynasty after Queen Roce was installed as a claimant by a Tang General c. 850 CE. This Chinese puppet state, while short-lived, was instrumental in the genesis of an early Loulani common identity, as the Kroraini language permeated through much of the non-Tocharian areas of the Tarim Basin under Chinese suzerainty. It was during this time that one of the most prolific pieces of Tocharian secular vernacular literature, the epic poem, the Gunacaṃdregāthā (གུ་ན་ཅཾ་དྲེ་གཱ་ཐཱ་), was written.

For a long period after the collapse of the Western Liao and Mongol Empires, the cultural character of the Tarim Basin remained mostly undisturbed and was left to proliferate with time until the Qing conquest in the late 1750s. Following the Dzungar genocide between 1757 and 1758, Qing authorities began to sponsor Loulani settlement in the former Dzungar lands to the north, expanding the Loulani culture to its present range.

The Loulani are a Eurasian population with Eastern- and Western-Eurasian anthropometric and genetic traits. Loulanis are thus one of the many populations of Central Eurasia that can be considered to be genetically related to Caucasoid and Mongoloid populations. However, various scientific studies differ on the size of each component.

One study (2008), using samples from Khotan only, found that Loulanis have 60% European or Southwest Asian ancestry and 40% East Asian ancestry. A further study showed a slightly greater European component (approximately 52% European) in the Loulani population in southern Loulan, but a slightly greater East Asian component (approximately 47% European) in the northern Loulani population. Another study (2009) used a larger sample of individuals from a wider area, and found only about 30% of a European component to the admixture.

The admixture may be the result of a continuous gene flow from populations of European and Asian descent, or may have been formed by a single event of admixture during a short period of time (the hybrid isolation model). If a hybrid isolation model is assumed, it can be estimated that the hypothetical admixture event occurred about 126 generations ago, or 2520 years ago assuming twenty years per generation.

According to a paper by Li et al.: 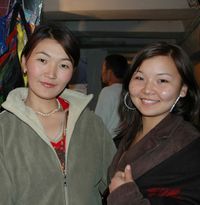 "... the western East Asians are more closely related to Loulanis than the eastern East Asians. ... STRUCTURE cannot distinguish recent admixture from a cline of other origin, and these analyses cannot prove admixture in the Loulanis; however, historical records indicate that the present Loulanis were formed by admixture between Tocharians from the west and Orkhon Uyghurs (Wugusi-Huihu, according to present Chinese pronunciation) from the east in the 8th century AD. The Uyghur Empire was originally located in Mongolia and conquered the Tocharian tribes in Xinjiang. Tocharians such as Krorän have been shown by archaeological findings to appear phenotypically similar to northern and central Europeans, whereas the Orkhon Uyghur people were clearly Mongolians. The two groups of people subsequently mixed in Xinjiang to become one population, the present Loulanis. We do not know the genetic constitution of the Tocharians, but if they were similar to western Siberians, such as the Khanty, admixture would already be biased toward similarity with East Asian populations."

"... that the Loulanis' genetic structure is more similar to East Asians than to Europeans, in contrast to the reports by Xu and Jin, whose work may have been affected by their sparse population coverage. The median line of the Eurasian genetic landscape appears to lie to the west of the region of Loulan. When we have collected more data on these 34 populations, we should be able to refine these estimates."

The physical features of many Loulanis, characterised by a mixture of European and East Asian characteristics, is considered "exotic" to the Han Chinese; in Chinese theatre and film, the use of Loulani actors has become common since they can play the roles of foreign characters while simultaneously able to speak Mandarin with near native fluency and diction.

The ancient Indo-European ancestors of the Loulani people practiced Shamanism and were likely polytheistic, although specific pre-Buddhist and pre-Manichaean beliefs are largely unknown. Buddhism has been the predominant religion in the Tarim basin since at least the last century before the common era. Islam first arrived in the Tarim basin in the 9th century. Most Loulanis are Mahayana Buddhists, but Islam is common particularly in the southwestern part of the Tarim basin.

The language of the Loulanis is the eponymous Loulanese language, an Indo-European language that stands as the last surviving member of the Tocharian languages. 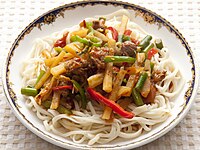 Loulani cuisine shows both Central Asian and Chinese elements. A typical Loulani dish is plov (པློཝ་), a dish found throughout central Asia. In a common version of the Loulani plov, carrots and mutton (or chicken) are first fried in oil with onions, then rice and water are added, and the whole dish is steamed. Raisins and dried apricots may also be added. Pärkṣalle (པཻརྐ་ཥལ་ལེ་) is a common way of preparing meats. Another common Loulani dish is laumain (ལཝ་མཡྣ་), a noodle dish with a stir-fried topping usually made from mutton and vegetables, such as tomatoes, onions, green bell peppers, chili peppers, and cabbage. The dish is likely to have originated from Chinese lamian, but its flavour and preparation are distinctively Loulani.

A Loulani-style breakfast consists of tea with home-baked bread, yoghurt, olives, honey, raisins, and almonds. Loulanis typically treat guests to tea, bread, fruits, and nuts before the main dishes are served. The most common type of bread is simply referred to as kanti (ཀན་ཏི་) in Loulanese. 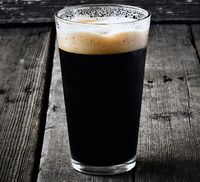 Beverages include black tea, a non-alcoholic honey-based drink called kụvās (ཀྭ་ཝཱས་), and other bottled drinks that are generally available in China and Russia. Another common beverage is the locally produced black beer (erkent tanāmot, འེར་ཀེནྟ་ཏ་ནཱ་མོཏ་), made using a cool fermentation method, which classes them as lager; it gets its dark colour from the use of particularly dark malts or roast malt extract in brewing. Grapes are grown in Loulan, which are used for wine production and other grape products. In Turpan, wine is an important part of the local economy and has been since the Tang dynasty. 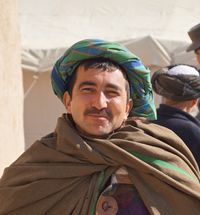 The capān (ཅ་པཱན་), a type of woolen coat worn over the clothes, is the traditional outerwear for men during the cold winter months. These coats are adorned with intricate threading and come in a variety of colors and patterns.

Similarly to many other central Asian ethnicities, Loulani men traditionally wear a soft flat-topped round hat known as a Pakol (པ་ཀོལ་); equally common is the Turban, known in Loulanese as a cārokorśo (ཅཱ་རོ་ཀོར་ཤོ) or among Muslims as an emāmah (འེ་མཱ་མཿ་).

While veils were formerly a common part of womens' wear prior to the 1940s as noted by the likes of such as Ahmad Kamal and sir Percy Sykes, but they have fallen almost entirely out of fashion and use except in the Muslim minority.

Muslim men traditionally cut all of the hair from their head. All men traditionally wore beards or moustaches; in men born after 1992, this is mostly limited to Muslims. The carrying of knives on the body is a major part of traditional Loulani culture, and are taken to demonstrate the masculinity of the wearer.

In recent years since the Chinese economic reform of the late 1970s and 80s, and especially since independence, western-style casual wear has become more and more common among Loulani people.

Retrieved from "https://iiwiki.us/mediawiki/index.php?title=Loulanis&oldid=115251"
Categories:
Hidden category:
This page was last edited on 2 October 2019, at 02:03.
Privacy policy
About IIWiki
Disclaimers