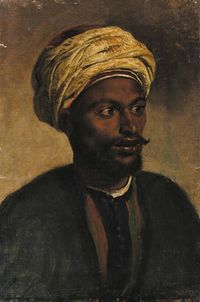 Attiyah Al-Judami, the most well known of the Louralic scholars who is often credited with proving Heliocentrism.

The Lourale ka Maoube, alternatively referred to as the Kupokana Kwevakachenjera in Rwizi and generally translated as the Contestations of the Elders, was a period of scientific, mathematical, theological and philosophical advancement within the scope of the Bahian Golden Age. The Lourale is generally accepted to have started around the beginning of the fifteenth century with the publishing of the theological treatise Akrivia Nakosmos (Absolute truth of the universe) by Theodoros of Igitare, the first major publication which linked the new discipline of Astronomy and Theology with the goal of proving other religions wrong. This was quickly siezed upon by the Fetishist and Irfanic Houregeries, who remained hostile despite the relative peace that had emerged with the adoption of Djaladjie. Scientific progress was seen as a way to disprove the other religion, as warfare had become too difficult to execute against Djaladjic Houregeries. The end of the Lourale ka Maoube is generally marked in the mid seventeenth century, coinciding with the end of the Bahian Golden Age and beginnings of Toubacterie.

During the Lourale, Houregeries saw scientific and philosophical prowess as a mark of prestige and influence, resulting in the creating of large universities and financial support of scientific research. The Lourale saw the origination of several major modern scientific fields. While the Lourale's importance to Astronomy is the largest and most recognised, Louralic scholars also laid the groundwork for Paleontology and even put forwards arguments for what would now be referred to as Evolution. Toubacterie resulted in many of these manuscripts falling into the hands of the Eucleans, which strengthened the scientific prowess of the Euclean states.