Euclea is a continent located entirely in the Northern and Western Hemispheres of Kylaris. It is bordered to the north by the Pervovo Sea, Boreal Sea, Ghaillish Sea, and North Sea, to the east by the Florian Ocean and Gulf of Assonaire, to the south by the Solarian Sea and Mazdan Sea, and to the west by the Lumine Ocean. Coius lies to the south and east.

Euclea covers approximately one sixteenth of Kylaris's surface and is home to slightly over one fifth of its population. It is the world's second-most populous continent after Coius and is its richest on a gross GDP basis; nearly 40% of the world's aggregate GDP is generated in Euclea. Politically, Euclea is divided into approximately thirty states, twelve of which comprise the Euclean Community. Narozalica is the largest country in Euclea, and Gaullica is the most populous. 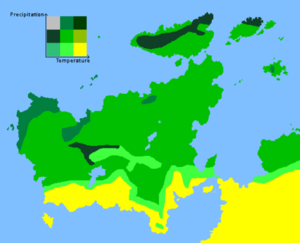 A climate map of Euclea

The Euclean climate is affected by warm currents that temper winters and summers for most of the continent, even at latitudes along which the climate elsewhere is severe. Seasonal differences are more noticeable farther inland than close to the coast.

Euclean is home to a number of regional organizations, most prominently the Euclean Community, which is currently the world's most fully realized supranational organization. Its member states have agreed to the free movement of goods, people, capital, and services, and have adopted a common currency, the euclo. Other major regional organizations include Samorspi, which brings together states that once comprised the Empire of Narozalica, the Aurean Forum, and the Northern Forum. The Community of Nations is headquartered in the Euclean country of Kesselbourg.

Retrieved from "https://iiwiki.us/mediawiki/index.php?title=Euclea&oldid=211210"
Categories:
Hidden categories:
This page was last edited on 25 May 2020, at 22:45.
Privacy policy
About IIWiki
Disclaimers