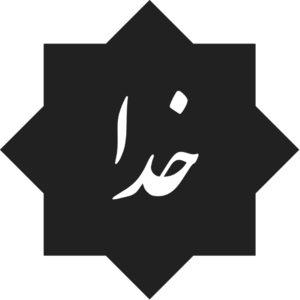 The symbol of Irfan

Irfan is a monotheistic religion in Coius which teaches that there is only one God (Behestee-Alef) and the Ebteda-Alef is his messenger. It is the world's X-largest religion with over XX followers, most commonly known as Irfanics. Irfanics make up a majority of the population in XX countries. Irfan teaches that God is merciful, all-powerful, transcendent and has guided humankind through prophets, revealed scriptures and natural signs. The primary scriptures of Irfan are the Niayesh, viewed by Irfanics as the verbatim word of God, and the teachings and normative example (called the E'lam, composed of accounts called Esbat) of the Ebteda-Alef and 12 Ahl-Bar.

The cornerstone to Irfan is the role of the Eternal Recurrence, in that existence has taken form multiple times and each cycle of life has ended with a great deluge, to be reformed by God. It is the responsibility of all humans to embrace the revelations of God to abide by God's teachings to avert the deluge and secure salvation. Irfanics believe that Irfan is the complete and universal version of a primordial faith that has been revealed in each cycle by prophets and messengers. Irfanics consider the Niayesh in its original Pasdani to be the unaltered and final revelation of God. Irfan teaches a final judgment with the righteous rewarded earth-bound paradise and salvation from the deluge. Religious concepts and practices include the Three Acts of Intercession, which are obligatory acts of worship, and following Irfanic law (Esafkar), which touches on virtually every aspect of life and society, from banking and welfare to women and the environment. The cities of Javanrud, Ardakan and Namin are home to the three holiest sites in Irfan.

Aside from the theological narrative, Irfan is historically believed to have originated in the early 8th century CE in Namin. Following the death of the Ebteda-Alef in 841 CE, the religion fell under the oppression of local Pardarian Zoroastrian rulers, but saw a resurgence in 860 CE, which led to the overthrow of the Zoroastrian Arasanid dynasty and by the late 9th century, the Second Dominion of Heaven extended from Hydana in the west, to the Bahian Coast in the east. The Irfanic Golden Age refers to the period traditionally dated from the 9th century to the 14th century, during the Bavarid Dominion of Heaven, when much of the historic Irfanic world was experiencing a scientific, economic and cultural flourishing.The expansion of the Irfanic world involved various Dominions, such as the Sanzarid Empire, traders and conversion to Irfan by missionary activities (Amoozaneedan).

Irfan (Pardarian: عرفان, Erfān) is a verbal noun which directly translates into "to learn" or "gain knowledge." Within Irfanic texts, the word Erfān is used to stress the necessity of becoming aware of God through the Niayesh and the corresponding E'lam. In one such verse the Niayesh states, "to learn, is to gain knowledge of those who came before and failed God, to learn of them is to learn of the means of salvation." In other verses, Irfan is connected to religion, "rejoice, for we are blessed with Irfan, which blesses us our religion." In Pasdani, Erfān may also be used to describe "wise man/wise men", this is collaborated by verse, with one saying, "through Irfan, we all become Irfani and righteousness does follow."

The Irfanic holy books are the records which most Irfani believe were dictated by God to various "great messengers" and finally the prophet. Irfanis believe that parts of the previously revealed scriptures, the Towrat (Torah) and the Anjeel (Gospel), were not the offical relevations of God, but rather prepatory works, paving the way for the final and ultimate revelation. The Niayesh (literally, "Luminary") is viewed by Irfanis as the final and universal revelation and literal word of God.

The Niayesh is divided into 188 chapters (moshtami) which combined, contain 6,521 verses (abyat). The chronologically earlier moshtami, revealed at Circle of Revelation, details the history of creation, the Eternal Recurrence, ethical and spiritual topics. The later Narimian moshtami mostly discuss social and legal issues relevant to the Irfanic community.

The Niayesh is more concerned with moral guidance than legislation, and is considered the "sourcebook of Irfanic principles and values". Irfanic jurists consult the Esbat ("reports"), or the written record of the Prophet's life, to both supplement the Niayesh and assist with its interpretation.

Right-Hand of God and Angels

Belief in angels is fundamental to Irfan. The Niayeshic word for angel (Pasdani: ملك, malak) derives from Malaka, meaning "he controlled", due to their power to govern different affairs assigned to them. Other terms include the archaic and loaned word, Mahraspand (مهراسپند, which means immortal (which is) holy). Both terms are exclusively used for heavenly spirits of the divine world, but not for human messengers. The Niayesh refers to both angelic and human messengers as "rasool" instead. 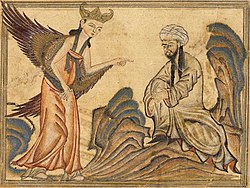 The Ebteda-Alef receiving the Revelation from the Right-Hand, according to Farzad Alizadeh, 1306.

The Niayesh is the principal source for the Irfanic concept of angels. Some of them, such as Ghazianeh (Warrior) and Rahamooz (Guide), are mentioned by name in the Niayesh, others are only referred to by their function. In Esbat literature, angels are often assigned to only one specific phenomena. Angels play a significant role in Elham literature, where the Ebteda-Alef and his caravan encounters several angels during their journey across the Dasht-e-Aftab desert. Further angels have often been featured in Irfanic eschatology, Irfanic theology and Irfanic philosophy. Duties assigned to angels include, for example, communicating revelations from God, glorifying God, recording every person's actions, and taking a person's soul at the time of death.

The most prominent angel is the Right-Hand of God (دست راست, Panjeh-Rast, simply Right-Hand), he is the angel that first revealed the Niayesh and God's presence to the Ebteda-Alef, as well as playing a persistent role throughout the religious narrative. At each consequential event of the prophet's journey toward ascension, the Right-Hand was present. In one Esbat, the Right-Hand is described as having a "blessing of a portion of God's power", as a result, the Right-Hand is usually viewed as being holier than other angels and more worthy of worship himself. In one verse it describes the Right-Hand as possessing significant power, "and so did the Right-Hand descend in bright light, to return to mortal life the blessed Adarshir", this verse is often taken literally in that the Right-Hand has the power of resurrection. It is common for Irfanics to pray to God and the Right-Hand equally when dealing with an ill loved one or friend. 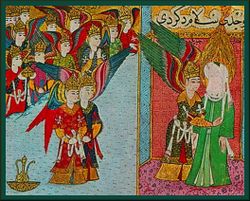 The Ebteda-Alef (face removed) with the Right-Hand and a host of Angels, according to Farouk Ibn Fadawi, 1444.

In Irfan, just like in other faiths angels are often represented in anthropomorphic forms combined with supernatural images, such as wings, being of great size or wearing heavenly articles. The Niayesh describes them as "messengers with wings—two, or three, or four (pairs): For all He [God] Creates, shall be Holy..." Common characteristics for angels are their missing needs for bodily desires, such as eating and drinking. Their lack of affinity to material desires is also expressed by their creation from God's light. Controversially, several schools of Irfan believe angels to be the "first men who averted the Deluge and ascended through salvation" and were rewarded with great "holy power and form", though this is generally rejected by mainstream theologians.

The cornerstone to Irfan is the belief of the Eternal Recurrence (Abadee-ye E-adah), in that creation has been made and destroyed numerous times by God, in each time, mankind is tasked with securing salvation through righteousness and abidance of Esefkar (Irfanic Law) in order to avoid the Great Deluge. Through the recurrence and an individuals role in achieving salvation, judgement of the soul is anchored in place. In Irfanic Eschatology each Cycle of Creation (Takvin-ye Da-yereh) comes to an end with the Day of Judgement (Jaza-Davaree). They believe the time of Jaza is preordained by God but unknown to man. The trials and tribulations preceding and during the Jaza are described in the Niayesh and the Esbat, and also in the commentaries of scholars. 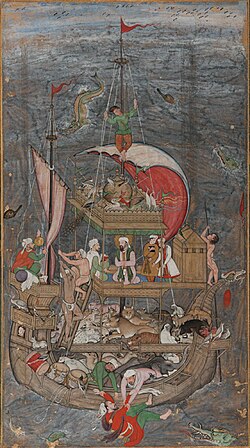 A 16th century Pasdani depiction of the Great Deluge.

The Niayesh does not give a specific number for the times creation has been formed and destroyed, though it states, "many a time was Creation made and Washed Clean by God. Many a time was Man made in God's heavenly Image, to fail him and his law." The Niayesh states that each Cycle (E-adah) sees all individuals who have ever lived and will live, until the Cycle ends, are reincarnated in the exact manner they exist now. The most commonly known verse of the Niayesh references this, "all Man who lived, lives and yet to live, has lived before. Those who came before, shall come again, until the Day of Judgement sees all Men ascend to Peace." Though all humans are reborn with each cycle, the Niayesh treats the previous incarnation as separate, referring to all humans from the previous cycle as "those who came before."

In Jaza-Davaree, Irfanics believe all humankind (both the dead and living at the time of Jaza) will be judged on their good and bad deeds in relation to the pursuit of salvation, where God will then determine whether to grant salvation and ascension to peace or destroy creation with a deluge. The Niayesh in Maddah-ye Jaza, "each deed of righteousness and each deed of sin shall be weighed of each man as one, the balance shall therewith decide Creation's salvation or damnation." Upon death, each person is judged alike for entry into Heaven (Behesht) or Hell (Darak).

The Niayesh has a detailed list of sins that can condemn a person to hell, or all mankind to the deluge. These are further detailed in the Three Acts of Intercession. Some of these sins are; disbelief in God (Pasdani: کافر‎ Kafer), murder, vanity, selfishness, greed and dishonesty; however, the text makes it clear God will forgive the sins of those who repent if he so wills. Good deeds, such as charity, prayer and compassion towards animal and people alike, will be rewarded with entry to heaven.

Free Will and Divine Will

Retrieved from "https://iiwiki.us/mediawiki/index.php?title=Irfan&oldid=92584"
Categories:
This page was last edited on 25 July 2019, at 23:52.
Privacy policy
About IIWiki
Disclaimers