Difference between revisions of "Vencedores" 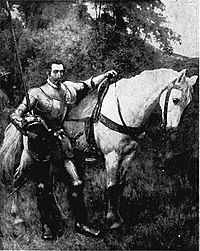 A vencedor, armed with a lance and a sword, with his horse.

Vencedores (English: vanquishers) is the name given to the companies of elite mercenary soldiers and explorers that spearheaded the expansion of Carloso during its colonial period and early independence. Initially hired to defend early coastal Spanish settlements and peripheral farmsteads against native raids, they were composed mainly of retired soldiers from throughout Europe, led by poor nobles who sought to make their fortune in the newly discovered continent of Musgorocia. As time progressed, many Musgorocian-born men found themselves joining companies of vencedores. They would prove a pivotal role in the War of Independence, forming the bulk of Cárlos de Oso's forces. Following the final victory in Madrigal and surrender of colonial forces in 1581, they would continue to be hugely influential in guiding Carloso's political and territorial development in the following centuries.

Starting in the 1590s, the vencedores led Carloso's rapid expansion northwards and westwards, successfully pushing back many native raids on the new towns and villages that were founded. With contracts spanning many decades, the vencedores slowly began to be integrated into the standing Carlosian Army as permanent regiments. At the same time, new forms of vencedor began to emerge, most famously the renowned warrior monks of the Holy Company of Saint Thomas Aquinas, which is the subject of many Carlosian folk songs. Nearing the late 1600s, however, and as Carloso began to consolidate control over its modern borders, there was no need for the vencedores and they quickly declined, hastened by the rise of full-time professional armies. Out of work, many resorted to banditry and piracy, which tainted the once heroic and virtuous reputation of the mercenary soldiers.

Starting in the 1800s however, the vencedores began to re-emerge as a romantic symbol of Carlosian patriotism, especially after the publication of the hugely influential epic novel The Tales of San Morillo. In 1899, The Vencedor's Song would prove to be a popular, patriotic song and would eventually be adopted as the national anthem of Carloso following the foundation of the Second Republic in 1932. They are still highly regarded today and continue to be a source of inspiration for music, literature and cinema. Many modern private security companies claim their ethos to be that of the vencedores. 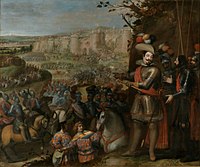 Vencedores during the Siege of Ek Chua.

In 1622 Carmelo Varela led an expedition into the uncharted lands north of Ebon to investigate native rumours of a great empire, cut off my expanses of forest and marshland from the rest of the continent. Varela and his men located the fabled Nukilik Empire and its capital, Ek Chua. Varela was welcomed warmly by Emperor Silatuyok, who was embroiled in a civil war with a pretender called Aujaq who had managed to rally a coalition of smaller cities against the native monarch. Varela spent several weeks in the city, teaching the natives in European warfare and learning about the history of the Musgorocian natives through an interpreter.

When news came that Aujaq's army was descending on Ek Chua, Varela had his men and some natives conceal themselves in the forests nearby, assaulting the enemy's rear when they approached to besiege the city. As this happened, it is said that a cross appeared in the skies above, striking fear into the hearts of the natives, who had only heard scattered rumours of the Christian religion through traders. The besieging warriors fled in terror at the sound of cannon fire and the vencedor knights. Aujaq was killed in the charge, his army quickly dissipating. The day afterwards, Silatyok and thousands of natives converted to Catholicism and were baptised by Franciscans who had accompanied the vencedores.

Retrieved from "https://iiwiki.us/mediawiki/index.php?title=Vencedores&oldid=128177"
Categories:
This page was last edited on 11 November 2019, at 02:24.
Privacy policy
About IIWiki
Disclaimers