Andus (Hellonian:ᚷᛖᚹᛖᛋᛏ ᚨᚾᚦᚢᛋ Gewest Andus, Ellandic: ᛚᚨᚾᚦᛋKᚨᛈ ᚨᚾᚦᚢᛋ Landskap Andus) is a province located in the north-west of Hellona. It is the largest province by population, with 2.892.000 citizens. It is bordered by the provinces of Noord-Alland and Zuid-Alland on the east, and Melre on the south. The capital and seat of the provincial government is Owidal, which also is the largest city in population and size. The King's Commissioner of Andus is Elsa den Bomendal.

Andus is known as the economic and cultural centre of Hellona. In the 1st century it had an integral role in the unification of Hellona. Its capital, Owidal, is an important trading hub in the Vismar region. The city and its metropolitan area cover most of the province's land area. Currently, the province is home to 48 municipalities.

The name Anðus is derived from the contraction of ¨An þe Ös¨ (by the Ös). The Ös is the most important river flowing through the province, ultimately discharging by Ovedal into the Vismar Sea. The central role the river played in the area, eventually led to the area being defined by its position to the river Ös. While the name originally was written in separate terms, it became commonplace to write it as one during the 11th century. There were, however, several spellings used for the province at first. These varied from Anðös, Anðös, Andös, Anðus, Anðes. Eventually, the standardized form would become Anðus.

After the last great ice age, modern men came to modern-day Owidal, where the oldest known tribal civilization of Hellona started. These Autochthonous hunter-gatherers, called the North Germanics or Hellonics, maintained relations with their ethnoculturally close South Germans, and the Nambalonian peoples in the west, partially because they travelled the seas as early as 0,5 million years ago. The Hellonics travelled much of the south Vetterran continent, and had early access to copper and bronze because of trade. This made it possible for the Hellonics to advance quickly, but was rivaled by Epca and Deian Salazar. The east Hellonic tribes, known as the Andus, formed the Andus Kingdom in 1400 B.C.

Andus quickly became one of the biggest trading nations on Vetterra. Together with the South Germans, the Andusians ruled the seas for most of the early ages. Andusians mainly focused on the North and western coast, while the South Germans focused on the south-eastern coasts. This era of Hellonian history is characterized by the many wars and the constant warfare between the Andus kingdom and the local populations of the many different states in the Hellonic region, including: the Rejkish city-states, the Duchy of Melre, the Realm of Alland, the Princedom of the Plaeten, the Sakensberg city-state federation, the Kingdom of Guldeland, the Republic of the Moeslanden, the United Chieftains of Rines, the City State of Brunhilde, the Tribes of the Centralberg and the Kingdom of Elland. These wars are often called the Andusian wars of Conquest. Andus under Björn Wodanerson kept winning in grand battles, leading one conquest after another. Ones the Andusian troops conquered Guldeland and were at distance from Elland, the Ellandic king Harald decided it was best to give up the Ellandic independence for peace. He offered his daughter, princess Viktoria Gyllenhjärt, to be wed to the Andusian hero-king Wodanerson. The Kingdom of Hellona was first formed by this act of union, and the modern royal family was formed. Wodanerson wanted to expand further, but decided to stop the march east after a failed expedition through the Centraberg mountain range.

Andus is flat for the most part, with hills and many forests around the east and north. The biggest forest being the Andemelere forest in the south, where the national animal, the red deer, can be found. The area around the capital of Owidal is mostly flat and highly urbanized.

As with other Hellonian provinces, Andus is further divided into municipalities, with 48 as of 8 January, 1894. These municipalities are grouped in COROP groups. These regions are used for analytical purposes by, among others, Statistics Hellona. The Hellonian abbreviation stands for Coördinatiecommissie Regionaal Onderzoeksprogramma, literally the Coordination Commission Regional Research Programme. Each province has 5. 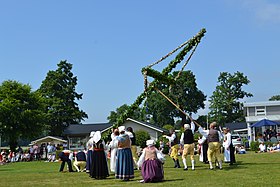 A maypole being erected in Alveen.

Andus has retained a traditional Hellonian culture throughout the years, despite modernization and strong foreign influences. Andusian culture was influential on the other provinces, as the Hellonian kingdom spread from Andus.

As the modern Hellonian version of Asatru was created in Andus, most Andusians follow this faith. Many Asatru temples have been erected in the city, the biggest one being the Nieuwe-Wodanertempel in the centre of Owidal.

As of 1894, around 90% of Andusians follow the Hellonian version of Asatru and 10% is irreligious or adhere other religions.

Andusian traditions include the traditional dress, called Boened/Klederdracht or Bunad in Ellandic. Each region has its own form of traditional dress, with each province having a provincial dress; which was often designed by combining various regional variations. The Andusian dress is very detailed and complex compared to simpler dresses in the east, owing to the riches coming in from Owidal. The Meiboomfest (Maypole festival) is still celebrated during Midsummer in Andus, and is celebrated the most in Andus after Elland. Andus has taken over some Norsundish traditions, like Lyukfest, when the people make drawings and throw them in the sea, which would bring good luck to sea-faring people. Other festivities from foreign countries have also been adapted, but to lesser extend.

Andusian culture has been called one of the purer forms of the Hellonian culture (which doesn't include Elland), and was, together with the Ellandic culture, the most important of the cultures to the Hellonian Romantic Nationalist movement from the 19th century and is still important to many Hellonians in modern day and age.

As Andusian culture has been romanticized as the ideal Hellonian culture, some of the other provinces have grown a more regional pride, growing a negative view on Andus, mostly the provinces of Halleren and Guldeland. Andusians, however, see themselves as Hellonians first.