Norsund is a constituent country of the Hellonian Realm located on Novallonda. It is the most sparsely populated country on Novallonda. The capital and largest city is Möskholm, which together with surrounding areas are home to over two-thirds of the population.

According to Hellonian myths, settlement started at around 1069, when Hellonian traveler Derrik Musterlingen became the first permanent settler. In the next few centuries, settlers from Hellona and the Elland province came. The indigenous people have adapted to many Hellonian and Ellandic customs and culture. Most settlers were Ellandics, escaping the low equality in Hellona, this is why the main language of the colony is Ellandic rather than Hellonian or indigenous languages.

Norsund has a open economy and has a low tax rate compared to Hellona, but maintains the same Nordic model standards as its colonizer and provides universal health care and tertiary education for its citizens. Norsund has been a economically and socially stable country for some time.

In prehistoric times, Norsund was inhabitated by Norsundish natives. Tribes on the western side of modern-day Norsund, were largely nomadic and unorganised, while tribes at the coast are known to have created governments, or at least tribal councils to organise themselves. These coastal societies were based on agriculture, using techniques such as irrigation and terracing; hunting and fishing were also important. These societies are not known to have used any monetary unit, and likely redistributed goods based on ownership of land or goods. The Quantistua, the oldest most complex known tribe, flourished along the coast around 4.000 years before Cody.

The Vejorda settlement grew into a large state in the north, and became a dominant power in the region. In the south, the Naq'tua became large, and mastered agriculture in colder areas.

Hellonians found the Norsundish colony around 950, around modern-day Möskholm, but never intended to colonize the area. They peacefully traded with both the Naq'tua and Vejorda. It was not until 1069 when Hellonian really settled on the land, with Derrik Musterlingen being the first permanent settler. Small settlements were founded on the east coast and southern parts. The biggest being the Ny land settlement, which is now where modern day Möskholm is located. The areas became mostly populated by Ellandic settlers, which intermixed with the local people. Slowly new cultures raised and the people began heading south. The Ny land settlement was still inhabited and thrived as trading point for Hellona and the native tribes. And around 1815, Norsund was officially declared Hellonian territory again.

In 1879, Norsund gained self governance, and a parliament was set up. Hellona still controls foreign affairs, as Norsund continues to be in the Hellonian realm. Nowadays, Ellandic is spoken the most, with a small Hellonian speaking minority in Moskholm. Ellandic was declared official state-language on the 18th of February, 18885, with Hellonian and German being secondary languages.

In 1890, several native languages were declared as official secondary languages.

Norsund has a cold climate, with only the south and east coast being inhabited. The major towns are the capital city of Möskholm on the eastcoast, along with its outlying towns of Nyavikan, Hafnarhem and Yedelhem in the south. Many Fjords line the north and eastern coasts, this also where most settlements are located.

The climate of Norsund's coast is subpolar oceanic. The warm Danonian Current ensures generally higher annual temperatures than in most places of similar latitude in the world. Despite its proximity to the Arctic, the land's coasts remain ice-free through the winter.

The climate varies between different parts of the land. Generally speaking, the south and east coast are warmer, wetter and windier than the north. The Central and Northern Highlands are the coldest part of the country. Low-lying inland areas in the north are the most arid. Snowfall in winter is more common in the north than the south.

Most mammals on Norsund have been imported, like the Vismaric horse. The only mammals before humans from Vetterra came were Muskoxen, Polar foxes, polar bears and seals. With killer whales and Norsundish whales being the only marine mammals. There are no native or free-living reptiles and only 1,800 known species of insects are known living in Norsund.

The animals of Norsund include the Norsundish sheep, cattle, chickens, goats, the sturdy Vismaric horse, and the Vismaric Husky-dog, all descendants of animals imported by Vetterans. Wild mammals include the Arctic fox, mink, mice, rats, rabbits and reindeer. Polar bears are common in the north, together with seals. Marine mammals include the grey seal (Halichoerus grypus) and harbor seal (Phoca vitulina). Many species of fish live in the ocean waters surrounding Norsund, and the fishing industry is a major part of Norsund's economy, accounting for approximately half of the country's total exports. Birds, especially seabirds, are an important part of Norsund's animal life. Vismaric seagulls, Norsundish Pengabird, and kittiwakes nest on its sea cliffs.

Norsund is a part of the Hellonian Realm, this means that in foreign policy, Norsund largely is represented by Hellona.

Like in Hellona, the monarch also only acts as a ceremonial head of the other countries in the Realm, and holds no real powers. Norsund has its own parliament, and elections are held every five years, with a whole new cabinet every five years, with the head of government being the minister-governor, usually the leader of the majority party in Parliament. Current minister-governor is Tesqua Iktasquat. Like the mainland, Norsund is very liberal, with relaxed laws on Euthanasia, abortion and LGTB rights.

Norsund is divided into five Hellonic Provinces and 10 Indigenous Special Regions (the ISR). The ISR's have special rights, like advocating local languages, giving special protection laws for certain ethnicities and can have a small government of their own. Each state has its own assembly, called a Provincial Thing (Hellonian: Gewestelijk Ding, Ellandic: Landskapsting) for the Hellonic provinces and a Nation Thing (Hellonian: Volksding, Ellandic: Folksting) for ISRs. 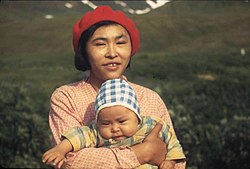 Norsund is one of the former colonial countries with the most indigenous peoples, with 47.3% identifying as of indigenous origin. 37.7% identify as Hellonic Norsunders; mainly Ellandic-speaking, with them mainly being concentrated in the coastal provinces. 15% are ethnically different peoples.

Under the indigenous groups, the Naq'tua, who mainly live at the northern coast in the Naq'tua ISR. Of the indigenous population, 35% identify as Naq'tua; the second biggest group being the Vismaric Vejorda, with 20% of the native population identifying as such.

Norsundish culture is a mixture of indigenous and Hellonic culture. A lot of native cultures are well preserved compared to other colonial nations, because of a large indigenous culture preservation movement happened in the 18th and later in the 20th century also. Norsundish architecture remained simple, most used materials being wood. Brightly painted houses can be found across the country, in traditional Hellonian countryside style. The biggest cities, like Möskholm, have large buildings in a baroque-style inspired by Andusian houses and the Royal Palace of Owidal, but also influenced by local culture.

Hellonians brought their traditional arts, foods and styles to Norsund, and natives began to adopt and adapt them for their own cultures too. This created interesting mixtures in both architecture, the aforementioned indigenous inspired baroque. But also paintings, songs and foods. Woodcarvature techniques were especially adopted by indigneous peoples for their own temples. Hellonians also brought with them their religion, Asatru, which is know practised by around 65% of the country, with the remaining people following indigenous beliefs (20%) or being agnostic or atheist (15%).

Cuisine is largely simplistic. Both Hellonian and pre-colonial Norsundish meals were simple and fulfilling, as both had climates that didn't allow for spices or large quantities of fruits to be harvested. With Hellona becoming a trading power, spices, fruits and vegetables were introduced to Norsund also.

Retrieved from "https://iiwiki.us/mediawiki/index.php?title=Norsund&oldid=65392"
Categories:
Hidden categories:
This page was last edited on 2 May 2019, at 20:21.
Privacy policy
About IIWiki
Disclaimers