The Battle at Rúhan's Bridge was a minor engagement in the War of the Two Ferries that saw a small army under Todoriq of Meharz pitted against a Rasigan force that had come to burn fishing boats. The name of the Rasigan commander, who had led a foray south across the Flotir, does not survive. It was fought on 5 February 1220 and was inconclusive, with moderate casualties on both sides. 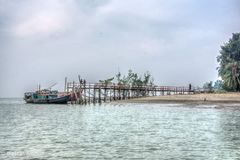 There was no bridge at Ruhan's Bridge in 1220. A bridge there had once crossed a channel of the Flotir delta at its northern end, allowing landowners access to their farms on several islands, but it was swept away by the hurricane of 1196 that also destroyed the Forts of Flotir further upriver. The bridge was not rebuilt until the 1240s, but the village was a minor fishing port and so had ample boats for crossings to continue. It was generally believed that these boats, and the boats of other towns, might be used by either side to launch a raid bypassing the traditional landing sites at the Rasigan and Meharzi ferries. Thus, the Rasigan leaders ordered the village raided and its boats burned and sent an army across the river to achieve this. Scouts quickly reported on the Rasigan movements to Prince Todoriq of Meharz, who led a party to defend the village.

The battle was minor and not known in detail, and no Rasigan account survives, meaning the reconstructed narrative may reflect some bias. The two armies met in broad daylight a short distance from the village. The Rasigans had not expected armed resistance and so hesitated about joining in combat, but Todoriq's skirmishers brought the Rasigans under fire and compelled them to give battle. They fought for some time before withdrawing without causing any damage to the village or its boats.

Following the raid, Todoriq stationed a guard at Rúhan's Bridge that was to remain until after the war.