The Congress of Twenties (Ziba: dezebuaga) is the unicameral federal legislature of the Republic of Dezevau. It is directly elected by open list proportional representation, with a third of delegates being elected every year; the entire chamber has undergone election every three years. It has 1,245 delegates. It meets in the capital of Dezevau, Bazadavo, in the Congress of Twenties Chamber, which is located in an underground governmental complex.

The Congress' powers are constitutionally limited as so to be largely unable to legislate for a non-socialist economy or a non council-democratic political system, and its powers otherwise mainly relate to uniquely national matters, such as foreign relations. However, where it legislates within power, its legislation overrides all other authority in the legal system outside of the Constitution; it is the highest and plenary legislative body of the country. It is also capable of legislating to allow plebiscites, which may then amend the Constitution through voting. Its power tends to be less than that of most national legislatures, however, owing to council democratic system in Dezevau.

Internationally, the Congress is notable for its non-partisan culture, with political clubs being dominant, though parties also exist. Over two thirds of the chamber's delegates are members of clubs; the largest is the Club of the New Left, with 448 delegates (40 being also members of other clubs). The Congress is one of the largest legislatures in the world by number of members, as well as one of the legislatures representing the most number of people.

The Congress elects one of its own members as Vadabu, who chairs the legislature when in session, and is a formal representative of it outside, while retaining full voting rights. Constitutionally, many manners of administration are left to the Vadabu, though in practice an administrative organ called the Vadabu's Office performs these duties under the oversight of the Vadabu.

"Congress of Twenties" is the usual and official Estmerish translation of the Ziba term dezebuaga; in Ziba, "twenty", deze, refers not only to the literal number twenty but is also used as a stand-in for any very great number. dezevau literally means "twenty land", but the name refers to the general numerousness and variety of city-states that used to prevail in the region. In the same way, the term "Congress of Twenties" is a reference to it being a plenary body which represents the entire breadth of Dezevau. buaga means congress, or assembly; any kind of large or plenary gathering. 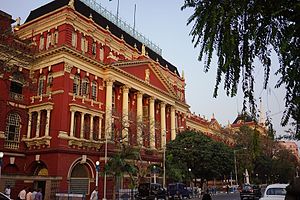 The Congress of Twenties has roots in historical assemblies (often buaga) in Dezevau, but was founded in its modern form in 1935 as the legislature of the Republic of Dezevau, approving the first version of the Constitution of Dezevau; it was then composed of representatives from the many councils which were established in the newly independent country under the guidance of the Dezevauni Section of the Workers' International, or Socialists. It met in Gongavangadao for the time being until the capital was established at Bazadavo within a few years. At the time, it was composed of only a few hundred delegates, around one per hundred thousand people. This ratio has largely been kept up until the present day.

While largely formally non-partisan, the Congress reflected the public mood which was favourable to the Socialists, though in the years shortly after independence the party largely took a liberal direction; there was little opposition to the party which was seen to have liberated the country. Sympathy, however, largely remained as more socialist policies were put in place.

Congress in session in 1969

As decolonisation accelerated, the phenomenon known as the Red Surge took place, mainly in Coius. With relation to the Association of Emerging Socialist Economies, large areas of the developing world became independent and socialist, while existing socialism was ideologically shored up. The Socialists gained confidence during this time, the party becoming increasingly centralised, bureaucratic and determinedly socialist. This was reflected in government, and while robust debate took place in Congress, the Liberal Party also having come into existence as a persistent opposition party, in many ways more decisionmaking took place within the party's leadership.

In 1970, the Congress of Twenties Chamber was completed, being internationally uniquely underground in the planned capital of Bazadavo. The Congress still meets there.

The Congress of Twenties, after the end of the Cultural Revolution, saw the Club of Metal become dominant, its policies espousing orthodox council communism, with power to the local councils, respect for the distinctiveness and independence of the country and the developing world more widely, and a progressive, modern outlook on history. It stayed the course despite spikes in the popularity of the Liberal Party, which unsuccessfully attempted to pare back the extent of socialism, and the increasingly substantial minority of Anarchist delegates.

The New Left rose some years more after the end of the Cultural Revolution, in many ways picking up its more radical aspects but also pursuing postmodernist renewal of the system to handle new issues, challenges and matters such as climate change, queer people, cultural rights, digital communication, animal rights and globalisation. It replaced Metal as the usual largest club, though its ascendancy has been seriously challenged in recent years by the Localists, who are even more decentralising and provincial in outlook. The Localists have lost delegate share in the last few elections, however, and very many (compared to other clubs) are also now members of other clubs, blunting their impact.

It was largely as the result of a push by the New Left in its early ascendancy that the electoral system was reformed, eliminating single-member constituencies in favour of larger ones, on the basis that they promote a wider variety of views. The system of open-list proportional representation in sub-state level electorates used today was established in this time, after plebiscites amending the Constitution.

The Congress holds powers granted to it by the Constitution including power over the military, interstate transportation, foreign policy, higher education, weights and measurements, postage, research and development and the environment. These powers are granted on the basis of being uniquely suited for a national government to exercise. Constitutionally, it shares powers with the states, who have power over other fields; in practice, the states delegate much power to more local levels. While the Congress has committees, it largely does not delegate, it being well-resourced enough to handle the matters which are assigned to it as the highest legislature.

The Congress is also restricted by the Constitution in what laws it can pass; it cannot pass laws which obstruct social access to basic goods and services such as food, water, electricity, housing, and so forth, as well as social freedoms such as those of belief, association and participation in politics. These restrictions are enforced by the Constitutional Court of Dezevau, though in practice, the Congress typically avoids constitutionally controversial laws, and so challenges are rare.

Since the Cultural Revolution and the dissolution of the Dezevauni Section of the Workers' International, the Congress of Twenties has had a much weaker party system than in most countries. While a party-list electoral system is used, most electorates are not large; they tend to elect a few dozen delegates at most, and their boundaries rarely change, as the number of delegates they elect each varying according to population. The number of delegates is around one per hundred thousand people, and there are currently 1,245 delegates. Electorates and delegate counts are adjusted every year since the institution of the continuous census system.

Party lists are typically alliances between a few candidates who belong to the same political club. Political clubs are informal groupings in the legislature, and tend to represent general political trends and movements in society; they were historically common in the earliest days of the republic but did not return until after the Cultural Revolution. Legally, their members are registered as independents, or members of parties which are typically much smaller than the general clubs themselves; this means that data by party is typically not useful for understanding the composition of the Congress. Participation in multiple clubs and movement from one to another is not uncommon.

The largest political clubs include the New Left, Metal, Localists and Anarchists. The most significant formal political party in Dezevau that still exists is the Liberal Party, which has advocated for distinctly non-socialist policies, largely without success, since its founding; it has been called the only real opposition by some observers, though others suggest that this disregards the largely participatory nature of politics in Dezevau, dissimilar to Eastern conceptions of democracy.

The Liberal Party has 157 delegates, the Green Party 54 delegates, the Party Pelangi 46 delegates, and the Traditionalist Party 16 delegates; these are the most significant non-club tendency political parties.

According to their own counts of attendance, in 2020 the main clubs by number of delegate members are:

The New Left, Metal and Localist clubs identify themselves as socialist, considering themselves descendants of the Dezevauni Section of the Workers' International tradition of explicitly internationalist and progressive socialism, upholding the Three Tenets.

There are over a hundred delegates who are not affiliated with any major party or club; they are generally referred to as independents.

The Congress of Twenties sits, typically, for several weekdays a week. Its sitting is designed to allow delegates to be in frequent contact with their constituencies, while also being assembled frequently. It is organised by the Vadabu, formally, but in practice the administration known as the Vadabu's Office manages these matters.

Languages that may be used for official purposes in the chamber include Ziba, any language official in a state, or any language otherwise given leave to be used by the Vadabu, with interpreters available in the chamber. Leave is usually fairly freely given, most often to delegates who are members of small ethnic minorities without state-level linguistic recognition, or who use a non-oral language owing to personal circumstances (apart from Dezevauni Sign Language which does not require leave as it is a state language). Legislation is however always authoritatively in Ziba, to ensure legal consistency, and in practice, the overwhelming majority of formal and informal business is conducted in Ziba.

The Congress has been criticised for being inefficient in its frequent elections and size (which has corresponded to population even as it has multiplied many times since the country's independence). Today, the Congress takes votes by electronic rollcall; its size makes use of digital technology useful to facilitate communication, including translation.

The Vadabu is selected by instant runoff, with one such election in the chamber allowed per day; this limit is to prevent the disruption of business by continually calling for elections, while not seriously hampering the ability of the Congress of Twenties to elect a new Vadabu if it chooses.

Legislation is the main manner in which the Congress exercises its power (its only other constitutional powers are to be in session and to select the Vadabu).

Amendments may be proposed before the final vote, and they are treated the same way as legislation in procedure; the chamber returns to the main piece of legislation after amendments are resolved.

The final vote comes after debate ends, and ends with the submitter having the floor to speak to sum up (though they do not always do this), unless they cede the privilege to someone else. A simple majority is needed to pass all legislation. 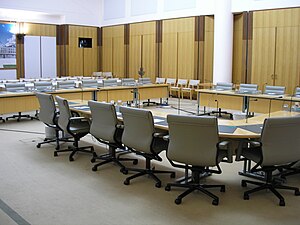 The Congress has a number of committees, which are standing non-partisan groupings of delegates for the purpose of examining particular matters in more detail than delegates in the Congress at large may be inclined to do. Most committees will admit any delegate who wishes to attend, and have cross-partisan representation. They are not decisionmaking bodies, but are rather more informal fora for discussion, collaboration and debate. They usually meet in the various conference and empty rooms which are part of the Congress of Twenties underground complex and near the main chamber.

Retrieved from "https://iiwiki.us/mediawiki/index.php?title=Congress_of_Twenties&oldid=301207"
Categories:
Hidden category:
This page was last edited on 20 January 2021, at 08:09.
Privacy policy
About IIWiki
Disclaimers