Corcaigh Nua (English: New Cork; pronounced //), historically referred to in English as Newmarsh, is the capital and largest city of Maltropia. It is located at the northern extremity of Maltropia's western peninsula, within the principality of Newmarsh. 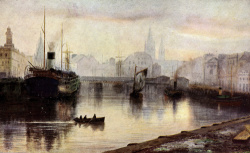 In the aftermath of the civil war, urban planners in Maltropia were faced with the daunting task of rebuilding large areas of the country. The Planning Directorate for Corcaigh Nua was instructed to prevent excessive segregation and to promote broader civic pride, and to achieve this they established a code which favoured "seamless zonal transitions" and "expansive integration" across districts. Private car ownership was a growing phenomenon, and it was envisioned that citizens might travel some distance between their homes and workplaces. A network of broad avenues emerged, with numerous parks and plazas. New churches were built much larger than before, to create a larger parish and thus a larger community. The success of this scheme was limited, however. I'll figure out why later.

Inner Corcaigh Nua is built on several hills, with the legal 'centre' of the city roughly 27 km (17 mi) northeast of the former capital. Tradition identifies seven hills: Cnoc an Aonaigh (Market Hill), Cnoc Beithe (Birch Hill ), Cnoc Cnoic (Hill Hill) and Ach Cnoc (Only a Hill). Modern consensus is that at least three of these 'hills' do not meet hill standards and are, at best, ridges or spurs of other hills.

Birch Hill is best known as the seat of the Maltropian monarchy and government. The area features lavish architecture largely dating to a period of extensive redevelopment in the mid- to late-eighteenth century; many of these buildings, generally five to seven storeys in height, are now upmarket residential properties. The nearby Market Hill area is host to most foreign missions to Maltropia, often in architecturally flamboyant buildings erected by the merchant classes in the 1880s. 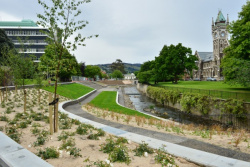 Corcaigh Nua is the largest educational centre in Maltropia, home to twelve major universities and over thirty other major third-level institutions. More than one in ten residents of the city is a student at second or third level.

The largest university in the city is the University of Newmarsh, which has its largest campus in Corcaigh Nua and over thirty thousand registered students.

Retrieved from "https://iiwiki.us/mediawiki/index.php?title=Corcaigh_Nua&oldid=101266"
Categories:
Hidden categories:
This page was last edited on 15 August 2019, at 02:15.
Privacy policy
About IIWiki
Disclaimers