Cunenia has historically been a region of uncharacteristically high White European settlement, particularly by Afrikaners during the Dorsland Trek of the 1870s and by Portuguese settlers during the 1880s and 1890s. A large community of mixed-race people exists as well. Afrikaans is the sole official language of the country and the mother tongue of the majority of white and mixed-race people, but Portuguese is widely spoken across all ethnic groups and may be considered a secondary lingua franca.

Alarmed by the decolonisation of Africa and the prospect of majority rule at the hands of a vengeful native populace, the predominantly white government of the region of Cunenia declared the region's independence from Angola on the 11th of November, 1975 — the very same day of Angola's independence from Portugal. The area was the site of armed conflict as part of the Angolan Civil War which lasted from independence to 2002. Hostilities have ceased, but the government of Angola does not acknowledge or recognise the existence of the Republic of Cunenia as a political entity. The situation is considered to be a frozen conflict, as no formal peace has been reached despite the end of the armed conflict.

Cunenia is nominally a parliamentary republic, but in practice political franchise is limited to white and coloured Afrikaans-speaking citizens, and elections have been indefinitely suspended. The President, Pieter Strydom, has been in power since 1997; under his authoritarian regime, the state's various administrative and security instruments are alleged to have committed numerous human rights violations.

The name Cunenia (as well as its Afrikaans and Portuguese forms, Kunenië and Cunenha respectively) is derived from the Cunene River which flows from north to south from the Angolan highlands through the middle of the country before turning westward, where it forms the border between Cunenia and Namibia before emptying into the Atlantic Ocean. It is one of the few perennial rivers in the region, spanning a length of 1,050 kilometres (652 mi), with a drainage basin 106,560 square kilometres (41,143 sq mi) in area. The river and its surrounding area were the primary areas of Boer settlement during the Dorsland Trek.

Cunenia is the only state to officially be known as a Boer Republic, a historical term used to refer to the former independent Afrikaner states in central and eastern South Africa and Namibia. The designation was intentionally chosen to foster a sense of Boer ethnic nationalism among the white and coloured Afrikaans-speaking communities present in the region.

Namibe, known until 1975 as Moçâmedes, was the first European settlement in the modern area of Cunenia, founded in 1840 by the Portuguese colonial administration of Angola on a bay originally known as Angra do Negro. A factory was established by order of the governor-general of Angola, Admiral Noronha, and by July of the same year a fort was built upon Ponta Negra. The area was mainly colonised by Portuguese settlers from Madeira and Brazil. In the 1850s the Portuguese government also gave sea passage and financial assistance to a large number of German colonists.

Dorsland Trek and push for the interior

In 1874, the first group of Dorsland trekkers set out from the Transvaal under the leadership of Gert Alberts, followed by a number of groups of migrating Boers over several different routes. The primary destination was the Humpata highlands of southwestern Portuguese Angola; on their journey, the settlers had to traverse Bechuanaland and the vast arid expanses of the Kalahari Desert, which gave the trek the name Dorsland Trek meaning "Thirst-Land Trek". In 1881, some five thousand Boers arrived in the region of the Huíla Plateau, and were given 200 hectares (490 acres) per family to settle on and farm. 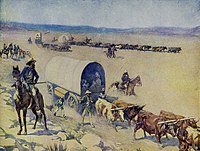 The Afrikaners taught the local Portuguese settlers cattle breeding and ox-cart driving, as well as superior marksmanship. The relationship between the Portuguese settlers and the Boers was quite cordial, and many Portuguese learned Afrikaans as well. The Portuguese authorities, however, did not approve of the Boers in Angola and never granted them citizenship, did not allow them to have legal ownership of their farms, and did not allow them to open Afrikaans language schools. As early as the mid 1890s, the tensions between the colonial authorities and the Boer settlers was apparent, and was written about at the time by the Swedish explorer Peter Möller.

At the same time that the Dorsland Trekkers were moving in from the south along the Cunene River, Portuguese settlers were driving hard for the interior from the coast. In 1882, approximately one thousand Portuguese settlers from Madeira arrived and founded a settlement at Sá da Bandeira. These Portuguese farmers confiscated the land of the indigenous population and developed the economy of the area to suit their economic interests, founding a whites only settlement. By 1910, over 1,700 ethnic Portuguese lived in the settlement, and by 1923 the Moçâmedes railway connected the settlement to the coastal port at Moçâmedes.

Under colonial law, black residents of Portuguese Angola were forbidden from forming political parties or labour unions. The first nationalist movements did not take root until the Second World War, spearheaded by a largely westernised Portuguese-speaking urban class which included many mestiços. During the early 1960s they were joined by other associations stemming from ad hoc labour activism in the rural workforce. Portugal's refusal to address increasing Angolan demands for self-determination provoked the eruption of armed conflict in 1961, beginning with the Baixe de Cassanje revolt and gradually evolving into a protracted war of independence persisting over the next welve years. 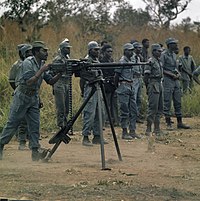 FNLA insurgents being trained in Zaire, 1973

Organisations such as the Bakongo Frente Nacional de Libertação de Angola (FNLA) in the north and the Ovimbundu União Nacional para a Independência Total de Angola (UNITA) in the central part of the country operated against the Portuguese colonial regime throughout the 1960s and early 1970s. In the southern part of the country, the large white and coloured settler population acted as counter-insurgents, effectively maintaining control of the area on behalf of the colonial government and pacifying the Huíla plateau, Cunene river basin and the Namib coast. Additional support from the South African Defence Force helped to secure the Okavango region against pro-independence insurgents.

In 1974, the Movimento das Forças Armadas staged a coup in Portugal in protest against the authoritarian political regime and the ongoing African colonial wars. The revolutionary Portuguese government abandoned its campaigns against the Angolan insurgents and withdrew all remaining elements of its colonial forces, agreeing to a quick handover of power to the nationalist African movements. This was both worrisome and insulting to the loyalist forces that held the southern part of the country, and set the stage for the coming bitter civil war in Angola.

From the 10th to the 15th of January 1975, negotiations took place between nationalist leaders and the Portuguese government in Alvor, Portugal, leading to the Alvor Agreement which granted Angola its independence as of 11 November 1975. 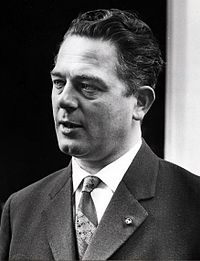 Under the leadership of Jan Jacobus de Kloos, the anti-separatist administration in the southern part of the colony quickly declared their own independence, effective the same date as Angola's independence on 11 November 1975. De Kloos then became the newly established Cunenian polity's first President.

Around the same time, the South African government warned De Kloos that the South African Defense Force would soon end all operations in Angola, despite the lack of international recognition for the separatist Cunenian polity and Angola's claim to the territory. Desperate to avoid the withdrawal of South Africa, De Kloos asked General Constand Viljoen to arrange a meeting for him with then Prime Minister of South Africa John Vorster. On the night of the 10th of November, the day before the formal declaration of independence of both Angola and Cunenia, De Kloos secretly flew to Pretoria to meet with Vorster. In a reversal of policy, Vorster not only agreed to keep troops in Angola, but also promised to withdraw the SADF only after the fledgling nation could organise solid defenses against both Angolan intervention and internal insurgency. By February 1976, the SADF had withdrawn from the area.

The majority of crop agriculture takes place in the higher elevations of Huila Province where rainfall is highest, and along the Kunene river where irrigation can take place. Particularly intensive growing takes place in the triangle between Sá da Bandeira, Caluquembe, and Chamutete, and along the stretch of the Kunene river between Humbe and Calueque; these are not-coincidentally the regions with the highest proportion of Whites and Coloureds throughout the country.

In the drier areas of the country, cattle herding is the most prominent form of agriculture. Cattle herding is particularly important in the eastern part of Kunene province as well as in the western and southern parts of Okavango province, although the latter is poorly controlled by the national government and contributes little to the national economy.

Prior to 1975, Cunenia was a major breadbasket region in southern Africa, but three decades of warfare (1975–2002) destroyed fertile countryside, left border regions littered with landmines, and drove much of the population into the cities. The country now frequently suffers from food shortages, and relies heavily on imported food crops, mainly from South Africa, to meet national needs. Domestic production of cereals frequently dips as low as 60% of consumption. The situation is more dire in areas under poor government control, such as the majority of Okavango province, where more than 90% of farming takes place at a purely subsistence level and thousands of farmers are trapped in abject poverty.

Afrikaans is the official language of Cunenia, and is the primary home language of about 90% of Whites and nearly all Coloureds in the country. A small population of Blacks, known locally as the Swartboertjies, also speak Afrikaans natively. The local variety of Afrikaans is derived from the Eastern Frontier dialect spoken by the Voortrekkers, and the local accent is quite similar to those of the Transvaal region.

Unofficially, Portuguese is widely in use, particularly as a lingua franca among unrelated indigenous tribes. The status of Portuguese as an unofficial national language is a relic of four centuries of Portuguese colonial rule in the area, ending in 1975. Portuguese is also spoken natively by many urban Blacks, and it is estimated that perhaps 47% of all Black Cunenians speak Portuguese as their primary home language, making it the most natively spoken language in the country. Several other unofficial languages carry recognised or protected status in their native ranges in more rural areas, including Herero, Ovambo, !Kung, Khoe, RuKwangali, and others. Unofficial languages may be used in certain official contexts in limited areas where it is determined that these languages are prevalent and circumstances "prevent effective communication in Afrikaans".

Cunenia is a majority Christian country. Official statistics do not exist, but it is estimated that approximately 70% of the country's population belong to the Catholic Church. The dominant White and Coloured minority however belong primarily to protestant faiths, most notably the Nederduitse Gereformeerde Kerk and the Nederduitsch Hervormde Kerk van Afrika. Only 1% to 2% of the population are Muslims, most of whom are immigrants from other African countries. Traditional indigenous religions are practiced by a very small minority, generally in peripheral rural zones.

Retrieved from "https://iiwiki.us/mediawiki/index.php?title=Cunenia&oldid=80359"
Category:
Hidden category:
This page was last edited on 22 June 2019, at 04:23.
Privacy policy
About IIWiki
Disclaimers