(Redirected from Dísitrú)
Jump to navigation Jump to search

Disitru has a complex system of godhood, with it being considered monotheistic, polytheistic, pandeismic and monismic, among others. Its concept of God and godhood is variant upon the tradition followed. Followers of Disitru often refer to it as henotheistic (i.e., involving devotion to a single god while accepting the existence of others).

"When hail we?
Who will here answer it?
Whence were we made?
Whence was this creation?
The gods came afterwards, with the new light
Who then knows whence the dawn has arisen?"

A similar concept of divinity is shared between all traditions. It is held that the gods (tívar) came into being shortly after the creation of the universe. There exists no singular creation myth and the reason for creation and the existence of a creator is disputed among traditions. The gods are held as possessing the divine spark, though they are not omniscient, omnipotent or held to be wholly benevolent.

Gods and Goddesses in Disitru

In the Sennleið tradition the Tívamál, the Time of Gods, has long since passed. Followers of this tradition believe that the event known as Ragnarök saw the deaths of many gods, with many others ascending to Valhöll. Týr became the Æztrhás, the supreme god charged with fulfilling all the duties expected of the gods. The Fallatýs (Descent of Týr) occurred when Týr descended to the Hel and bargained for the release of the slain gods, in return for taking charge of the underworld. His daughter, Damen (The Dame), took his place as the supreme god while the other gods ascended to Valhöll, and will remain the supreme god until Mánimál, when the world will be reborn as a paradise under the deity known as Vít.

Though for the most part considered a unified group, the gods are traditionally classified into three castes: the Æsir, the Vanir, and the Jötunn. The differences between the groups vary in the myths, with earlier stories tending to imagine them as having striking physical differences which later stories lack. In the modern day the Æsir are commonly associated with the sky, rulership, and war, the Vanir with the earth, economics, and fertility, and the Jötunn as primal beings of nature. Most scholars believe that the differences are a result of a societal imprint left by historical events, the Jötunn being an echo of the Paleo-Hallanics. The Æsir and Vanir are believed to be representative of the old Irya-Moelian castes, the Æsir representing the first and second caste: priests and warriors, and the Vanir representing the third caste: farmers and tradesmen.

Marriage in Disitru is a complex and non-uniform matter, with not only different concepts and levels of marriage, but also differing attitudes among sects, states, and individual Disitruar towards not only the concept of marriage, but also concerning divorce, remarriage, gender roles, family authority, the legal status of married women, birth control, marriageable age, cousin marriage, marriage of in-laws, interfaith marriage, same-sex marriage, and polygamy, among other topics, and there cannot be said to be a single, uniform, worldwide view of marriage in Disitru.

By the 18th century a number of synods were convened to address the matter of marriage, which had largely been uncodified and left to local monasteries and secular authorities. Over time three tiers of marriage were recognised: the sacred Helgtband, the contractual Handfesta, and the secular Eskerhlaup.

While the helgtband is required to be, both religiously and legally, monogamous, it depends upon the local and national jurisdictions as to whether it affects the right to undertake further handfesta or eskerhlaup marriages, or whether such previous arrangements are dissolved.

A Handfesta marriage was historically a contractual marriage, often of a temporary nature. In the modern-day they may still be undertaken for a set period of time, with the option of renewal, though they are more often undertaken as permanent institutions. The handfesta may be a religious or secular union, depending upon local or national laws. Historically the children of a handfesta were considered to be of lower status to those of a helgtband, but higher than those of an eskerhlaup.

Traditionally the handfesta was polygamous, due to its contractual nature. In the modern-day this is also true, though there are legal restrictions upon undertaking multiple handfesta, and they may be considered incompatible with, or automatically dissolved upon undertaking, a helgtband marriage.

An Eskerhlaup marriage was the latest of the three marriages to be codified, coming from a combination of cohabitation, common-law marriages, and historically concubinages. It is considered to be purely secular, though in the modern-day in some areas a religious ceremony is possible. The legal protections and privileges of an eskerhlaup depend upon the state, and it is considered the easiest of the three to dissolve. The children of an eskerhlaup were historically considered to be of the lowest status, and some still face social and economic discrimination. 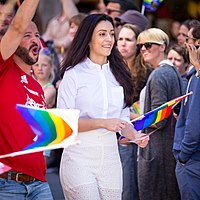 President of Tuskval Sabine Greve at a pride parade in Rhinmond

The marital rights of the LGBT community differ both depending on the marriage tier and the local jurisdiction, and have a complex history. The Reformation in 1131 largely granted new rights and protections to LGBT individuals, though it did not codify their marital rights. Most states historically only recognised same-sex unions in a secular fashion, with religious institutions refusing to conduct ceremonies to allow for the 'higher tiers' of marriage. The synods of the 18th century largely denied helgtband and religious handfesta same-sex marriages, and the Alting pursued greater restrictions on secular same-sex handfesta and eskerhlaup unions.

After the dissolution of the Kingdom of Hallania and the disestablishment of the Grand Synod, restrictions upon same-sex marriages were gradually eased for handfesta and eskerhlaup unions. Recognition of same-sex helgtband unions are more controversial, depending legally on the laws of the local state, and religiously on the opinion of a High Synod. The Grand Synod in 2016 reviewed the issue and affirmed the heterosexual nature of the helgtband, though some High Synods dissented from this view.

A pine tree, decorated for Aflinntide.

Across all denominations, there a number of religious holidays in Disitru. The two most prominent of these are Aflinntide and Veislatide, which are celebrated in conjunction with the winter and summer solstices respectively. Aflinntide, also known as Yule, is a gift-giving holiday celebrated in December, which emphasises the values of family, friendship and sharing.

Common activities during Yule include the decoration of pine trees, the hanging of lights, gift-giving and the consumption of hearty foods. A gift-giver is present in some denominations, though the personal exchange of gifts is universal to all.

Conversely, Veislatide, also known as Midsummer, is celebrated in June, and is a holiday which focuses on self-improvement and the settling of quarrels. During Veislatide, harvest games and maypoles are common, while it is expected for the pious to set a goal for themselves to achieve before the next Midusmmer, and to settle any disputes they have with others.

Ditantist Temples perpetuated the belief that Disitruar were carriers of physical and spiritual diseases. They were often forced to live in segregated communities and, if someone was discovered living in the wrong place or converted, their homes were burned to prevent contamination.