Tuskval is a Federal presidential republic. The current president is Vidar Bruun, who was elected in 2016. Tuskval's capital and largest city is Rhinmond, a regional city and financial centre with an urban area population of 2.4 million. Other major cities include Kærlund, Kyuko, Lysbæk, Hvitvik, and Hjortsskov.

A unified Tuskval emerged in the late 9th century, and would continue to expand into its current borders up until the 16th century. The medieval period was marked by Hallic infighting and a struggle for control of the Loekic Ocean and lucrative trade routes. Parts of historical Velsken were conquered by the 13th century, and the rest inherited by the 15th. A personal union with Svaldheim was established in 1655. Crethia came under a personal union in 1798 after a brief period of independence from Ronnland. In 1812 the three kingdoms were united as the Kingdom of Hallania. The end of the Continental War in 1916 saw the Kingdom of Hallania forcefully partitioned, resulting in the Hallanic Civil War. The Grand Duchy of Tuskval emerged as the legal successor of Hallania in 1918, and in 1925 a republic was established with the monarchy being abolished.

The etymology of the name "Tuskval", the relationship between "Tuske" and "Tuskval", and the idea of a "Tuskval proper" and the present expanded use of "Tuskval" are topics of continuous scholarly debate. The debate is largely centred over the prefix "Tusk", and what relation it has to the "Teskhoi" people mentioned in Ipesian records.

The most commonly accepted source of "Tuske" is a derivation of Old Hallic "torf" and "konr", meaning "Children of the Soil". It is believed that it was highly mutated by conflation with the "Tusk" in "Tuskval", which itself was derived from Old Hallic "tosk" and "vald", meaning "Toad Valley". This is reflected in its Tuskish form "Tørske".

The first recorded use of Tuskevold within Tuskval itself is found on the Holholt Axe fragments, which also references a King Vegeir. The first official reference is found in a 1103 decree by Sigurd II, legitimising his natural son and establishing his place in the succession. The exact definition of Tuskval expanded considerably during the 15th and 16th centuries, from a small south-western realm to near its current-day borders.

Tuskval is a federal republic composed of 21 States and 9 Free States, grouped into 9 regions.

Each state has its own parliament and a judiciary, and its citizens elect by directly voting a governor for a four-year term, and representatives to their respective unicameral state parliament for four-year terms. Each state sends 4 delegates to the Statermøde. The states are further divided into shires (schirs), of which there are 594 total.

Free States are special political divisions designed to be home to specific ethnic and linguistic minorities. They have more autonomy from federal oversight, the ability to create their own constitutions, establish their own official language alongside Tuskish, and can initiate the process of secession.

The regions are federal groupings of states. They are headed by a superintendent, who is selected by the president and confirmed by the constituent states' parliaments. The superintendent can veto any states' legislation, subject to a counter-veto, and for regular states can dissolve a state parliament, and force a recall of a state governor.

Parliamentary ridings (tredjengs) are apportioned among the regions, sometimes but rarely crossing state boundaries. The ridings are reviewed decennially by a cross-party commission. The total number of ridings is 400, with each electing a single member to the Folkemøde.

The Free State of Kyuko is an overseas territory of Tuskval, located in Kokai Bay with a maritime and physical border with Ashihara. It has a population of 2,445,689, of various nationalities, in a 277-square-kilometre area, making it one of the most densely populated areas in the world.

Originally a sparsely populated area of fishing villages, the state has become one of the world's most significant centres of finance, and commercial ports. Since the easing of Tusco-Ashiharan relations in 1995 it has also become a cultural and economic centre for Ashihara. Tuskval acquired Kyuko in 1661 by purchasing it from the local daimyo, and extended its territory in the Orange Wars. Tuskval's permanent sovereignty over Kyuko was affirmed by the 1889 Convention of Naniwa, and again by the Tusco-Ashiharan Joint Declaration in 1995.

Though officially a Free State of Tuskval, Kyuko has its own currency (the Kyuko Mark), lacks the ability to initiate secession, and its governor is by convention its regional superintendent. 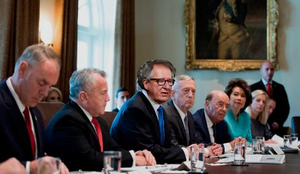 A cabinet meeting with President Bruun in 2017

Tuskval has operated under a two-party system for most of its history, a system inherited from its predecessor the Kingdom of Hallania. The Democratic-Republican Party, also commonly known as Libertines, is often considered "conservative" and the Liberal and Unionist Party, commonly known as Cadets, is often considered "liberal". The two parties are generally considered to be "big-tent" and contain within them overlapping factions and ideologies. Both parties date back to the Kingdom of Hallania, with the Democratic-Republican Party founded in 1815 as the Democratic-Monarchist Party, and the Liberal and Unionist Party was founded in 1826.

Democratic-Republican Sabine Greve, the winner of the 2020 presidential election, is serving as the 17th president of Tuskval.

Tuskval is a federation, and a representative democracy using a presidential system of governance. The government is regulated by a system of checks and balances, which are delineated in the Constitution of Tuskval.

There are generally three levels of government: federal, state, and local.

Legislative: The bicameral Alting, made up of the Statermøde and the Folkemøde, creates federal law, ratifies treaties, and has the power of impeachment, by which it can remove sitting members of the government.
Executive: The president is the commander-in-chief of the military, can introduce legislation to the house, can veto legislative bills before they become law (subject to parliamentary override), appoints the Chancellor of the Civil Service, appoints the members of the Cabinet and other officers, who administer and enforce federal laws and policies.
Judicial: The Supreme Court and lower federal courts, whose judges are appointed by the president with Statermøde approval, interpret laws and overturn those they find unconstitutional.