Danaska is the capital and largest city of the Gladysynthian province of Asa'aria and the third-largest metropolitan area by population in the country. According to the National Census of 2015, the population of Danaska was 6,292,000, making it one of the 30 most populated cities in the Coalition of Crown Albatross. It is located on the mouth of the Danaska River across the border from Zamastan, connected to the city of Angenta by the Angenta Friendship Bridge.

Danaska's roots are traced back to an old fishing village along Horseshoe Bay in the 5th century B.C.E.. In the 19th and 20th century, the massive oil reserves of the Picotheca oil sands were discovered, and Danaska's economy largely shifted to the emerging oil boom. The city was the site of major fighting during the First (1945), Second (1970), and Third (2018) wars with Zamastan, the first of which devestated much of the city. Since the Tariel War, Danaska's population and economy has boomed, making it the largest and most prosperous economic center of Gladysynthia's southern region after the capital of Mönusÿnthys.

In 1993, the remains of a Bronze Age bridge constructed by the Åethnoa were found on the south foreshore of the Danaska River. This bridge either crossed the river or reached a now lost island in it. Two of those timbers were radiocarbon dated to between 1750 BC and 1285 BC. 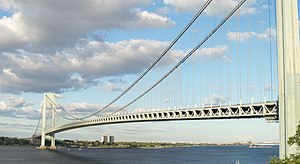 In 2000, the Gladysynthian and Zamastanian governments came to a historic trade agreement after decades of sanctions, resulting in huge economic gains for Danaska. In the agreement, the governments agreed to construct the Angenta Friendship Bridge spanning the Danaska River, which was completed in 2002.

In 2007, Danaska's population reached 6 million and became one of the 20th largest city in the Coalition of Crown Albatross.

Retrieved from "https://iiwiki.us/mediawiki/index.php?title=Danaska&oldid=199111"
Categories:
Hidden categories:
This page was last edited on 30 April 2020, at 21:11.
Privacy policy
About IIWiki
Disclaimers