The United Kingdom of Emmeria, or simply Emmeria, is a country in the continent of Anea to the west of Estovakia and the southeast of Nordennavic. It is 8,404,806 square kilometers in area, and over 169 million people reside in mainland Suevia and the island territories. The capital city, New Avalon, is in the southeast of the country and has over 11 million residents.

Since its founding, Emmeria has been a major player in Altereal affairs, and is considered to be one of the world's three superpowers alongside Osea and Yuktobania. As one of the most populous and developed nations in the world, it has great economic, diplomatic, cultural and military influence. It is a member of the Commonwealth of Nations, the G7, the G15 and the IUN Security Council (as a permanent member) among other organizations.

The Age of Conflict

The First Global War was a conflict between the Entente (Osea, Emmeria, Yuktobania and various Usean nations) and the Triple Powers (Belka, Erusea and the Oghuz Sultanate). Emmerian involvement was limited to colonial skirmishes, expeditionary warfare and support of allies, mainly because the Kingdom of Estovakia was neutral in the conflict, leading to a relatively peaceful Anean continent. 293,415 soldiers, sailors and airmen of the Royal Emmerian Armed Forces died during the conflict, with a further 64,166 dead from Dominion and Colonial Forces.

In the Sotoan subcontinent Emmerian forces fought against a mix of Oghuz and Erusean forces. Due to the difficulty of supplying troops from the opposite side of the world, Erusean colonies were quickly overrun by Emmerian colonial forces. However, Erusean guerrilla forces would be active until the end of the war. Working with local tribes, Emmerian forces also managed to expel Oghuz forces from Rasheedi Tamudia.

Due to the weakness of the Oghuz Sultanate's navy, and the fact that the Royal Emmerian Navy possessed the largest fleet our of all the combatant nations, Emmeria was quickly able to establish control of sea lanes and blockade the Sultanate's coast, However, mines and submarines proved to be a significant problem for warships supporting amphibious and other coastal operations. The Royal Emmerian Armed Forces carried out the world's first modern amphibious landing in 1916, against the southwestern part of the Europan subcontinent. The Royal Emmerian Navy also experimented with naval aviation throughout the war, launching HMS Hermes, the world's first aircraft carrier capable of launching and recovering aircraft, in 1919.

As the Yuktobanian Imperial Army faltered due to poor leadership, logistics and equipment, the Emmerian High Command decided to assist the Yuktobanians by sending several Emmerian field armies into Oghuz-controlled portions of Europa. While this freed up some Yuktobanian tropes for the Kalugan front, both the Yuktobanian Empire and Oghuz Sultanate would ultimately collapse due to internal discontent, strife and war-weariness.

Aftershocks of the First Global War

The Decade of Prosperity

The Road to War

The Verusan Front of the Second Global War began on September 17th 1939, when the Oghuz Republic's armed forces invaded the Kingdom of Rasheedi Tamudia. Honoring a mutual defense agreement signed in March, Emmeria and the various nations of the Emmerian Empire declared war against the Oghuz Republic on the 19th. Influenced by Belkan tactics and military advisers, the Oghuz forces deployed tanks, motorized infantry and tactical airpower to great effect, overrunning all of the country within 7 weeks. Emmerian and colonial forces sent to relieve Rasheedi Tamudia were forced to retreat into Sotoa and Central Sotoa by the larger Oghuz invading force.

In April 1940, Oghuz forces crossed the Strait of Gilboa into southeastern Europa. Europan regular and irregular forces, often assisted by Emmerian forces, fought an effective delaying action in the mountainous terrain, stalling Oghuz troops. The Oghuz Army Group B would only reach Kopebad in October, after slogging through a series of Europan defensive lines.

That May, the Islamic Emirate of Karabastan was invaded by Oghuz troops. Repeating their successes in Rasheedi Tamudia the previous year, Oghuz forces conquered the Emirate within months. However, the advance of Oghuz forces to the Karabastan-Yuktobania border alarmed the Yuktobanian Union, which began to reorganize and call up its forces.

Decolonization and Formation of the Commonwealth (1946~1973)

The United Kingdom of Emmeria is divided into 4 countries (Albion, Alba, Cambria and Hibernia), which are subdivided into regions. Each country has power over most internal affairs, but defense, foreign affairs and other federal tasks are carried out by the central government in New Avalon. Emmeria is also responsible for the external affairs of the Mersey Islands, a crown dependency with a population of 257,600 in 2019.

The Country of Albion consists of 9 regions, which are subdivided into counties. The First Minister of Albion and the Albion Parliament are based in New Avalon. As the most populous country (133,576,700 people in 2019), and the seat of the federal government, Avalon has historically played a leading role in the Federation. The country sends 479 MPs to the Parliament of Emmeria.

The Country of Alba consists of 3 regions, which are divided into shires. The First Minister of Alba and the Alban Parliament are based in Strathclyde. The state had a population of 13,032,500 people in 2019, and sends 53 MPs to the Parliament of Emmeria.

The Country of Cambria consists of 1 region, which is divided into principal areas. The First Minister of Cambria and Cambrian National Assembly are based in Bridgeport. The state had a population of 7,508,500 in 2019, and sends 36 MPs to the Parliament of Emmeria.

The Country of Hibernia consists of 4 regions, which are divided into counties. The First Minister of Hibernia and Hibernian Assembly are based in Dalway. The state had a population of 15,790,300 people in 2019, and sends 68 MPs to the Parliament of Emmeria.

Each county can be further divided into various boroughs and districts.

Since the end of the Second Global War, its principal adversary has been the armed forces of Yuktobania.

In 2019 the United Kingdom of Emmeria spent a total of $302.2 billion on defense, equivalent to 3.35% of GDP. Emmeria has 683,700 active military personnel and 864,200 reserve personnel. Due to consistent investment in training, equipment and technology, along with the world's second largest economy (behind Osea) and third largest defense budget (behind Osea and Yuktobania), Emmeria possesses one of the most powerful armed forces in Altereal.

Emmeria has a diverse range of natural resources across its various regions, including oil, natural gas, coal, uranium and iron ore. Oil and gas are primarily extracted from fields in Cambria and Hibernia, and offshore fields in the Orland Islands (northern Alba). Coal is primarily mined in central Albion, and has been mined in significant quantities since the Industrial Revolution. 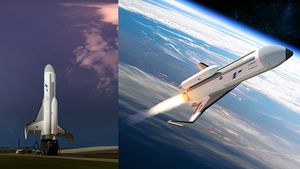 The Emmerian Space Agency (formerly the Emmerian National Space Center) was established to explore the realm of outer space, and to open it up to various applications. Since its creation in 1959 it has been a world leader in space operations, cooperating with other space agencies on various projects. In 2019 it had a budget of OF$15.314 billion and 12,460 employees.

The first Emmerian satellite was launched from a Black Knight rocket in 1959. Since then various satellites have been launched into LEO and GEO, including the GSN navigation network, the EMCOM and ECSAT communication satellites, the FORESIGHT reconnaissance satellites, and various scientific satellites. South Axiomian space probes have visited all the planets in the solar system, the moon, several comets, the asteroid belt and Pluto.

The Artemis two-person space capsule, and its Black Prince booster, was developed from the Blue Streak ballistic missile project in the mid-1960s to provide Emmeria with a manned spaceflight capability. The two astronauts of the 1965 Artemis 3 mission were the first Emmerians in space. 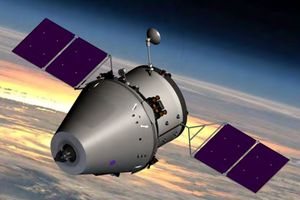 The Artemis was followed by the the three-person Aries capsule (and Cepheus II booster), which first flew in 1969. The Aries, along with the Osean Space Shuttle and Yuktobanian Soyuz, would play a key role in the International Space Station Project. An improved version, the Aries-N, is still in service today.

The ESA, along with Perseus Air and Space Technologies, is currently testing a fully reusable space-plane, the Hyperion. The Hyperion can carry 2~7 people and/or cargo, and is made up of the main spacecraft and two boosters. The boosters separate after launch, and are recovered through controlled landing at sea, like the SpaceX Falcon 9. The main spacecraft lands as a glider after re-entry.

The Hyperion is planned to open up a new age of manned space exploration, with the ability to cost-effectively assemble large, modular deep-space craft. Manned missions to near-earth asteroids (2024), the moon (2027) and Mars (2035~37) are planned in the future.