The gilder (or gælder in Lhedwinic; Glanish pronunciation: [GILL-DER]; plural: gælder; sign: ₲; code: SGG) is the currency of Glanodel. It is subdivided into 100 øre (singular: øre). The smallest denomination currently produced is the 10 øre coin (or 10 cent coin), but the øre remains the smallest unit of account. The word gælder is based on the Old Lhedwinic word (spelled and pronounced the same) which directly translated to "debt" or "to owe" and was chosen by the majority of Glanish banks to refer to the first banknotes produced in Glanodel.

The gilder is traded globally and has historically been a reliable and consistent store of value. This is generally attributed to its reliable purchasing power, steady and low inflation rate, the political and financial stability of Glanodel, and the central bank's consistent and investor-friendly monetary policies. As a result, the gilder is often described by financial news as a hard currency. In October of 2017, the gilder was the 5th most traded currency in the world by value and accounted for 2.6% of the world's non-gold foreign exchange reserves.

By the end of the 18th century there were 34 entities minting coins for circulation, including all original 31 cantons as well as the cities of Brosta, Dysted, and Horne, resulting in over 150 different coins in circulation each with varying values, denominations, and monetary systems. 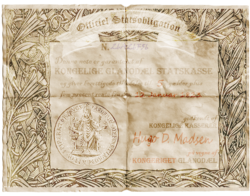 Beginning in 1821, the Governor-General of Glanodel ordered the Royal Treasury to begin issuing treasury bonds in order to raise revenue.

Throughout the 19th century, Glanodel faced numerous financial challenges as a result of Governor-General Abel Flandin's "Rapid Industry Campaign" which tripled the national debt in less than five years as the nation imported resources to supplement its industrialization goals. In addition to selling off government assets like factories and property to cover the costs of the imported goods, the government began to issue treasury bonds to the general population to generate additional revenue. As a type of short term debt instrument, these notes initially fared well and resulted in a noticeable upward trend in the national economy over the first decade following their implementation. As issued, the bonds were neither legal tender nor representative money, but were often used in lieu of an official federal paper money as a Glanish central banking system had not been implemented yet.

Beginning in 1867, however, the total value of the treasury bonds issues vastly exceeded the value of the Treasury's reserves and by 1872 the purchase of bonds had declined, drastically. In 1881, the Treasury's funds were officially depleted as bond holders rushed the Treasury. Without available lenders, the government began to default on its debts. This resulted in a nationwide depression that lasted until 1887 when the government of the United Kingdom agreed to a temporary emergency funding measure to offset the nation's failing economy.

With most gold taken out of circulation and the complete devaluation of Royal Treasury bonds and most local currencies in Glanodel, the Lhedwin krona became the only currency of value in circulation throughout the Kingdom. From 1887 until 1900, the krona became the most frequently used medium of exchange and was the first move towards a single, unified currency in Glanodel.

Following the dissolution of the United Kingdom of Lhedwin and its Treasury, the krona became valueless. As a result, one of the first challenges of the provisional government of Glanodel was to reestablish a modern, post-war economy. Granted the authority to regulate commerce by the newly ratified constitution, the new government passed the Single Currency Act granting the federal government sole authority to print the currency authorized as legal tender within the Commonwealth of Glanodel. This was the beginning of the modern gælder.

At the time it was first issued, the gælder was valued at approximately 0.201536 grams of gold and could be redeemed at the federal treasury on demand for its value in gold coins. In 1956, a referendum and a successive vote by Congress ended the use of the gold standard in Glanodel and the introduction of a fiat currency.

Retrieved from "https://iiwiki.us/mediawiki/index.php?title=Glanish_currency&oldid=61226"
Categories:
Hidden category:
This page was last edited on 20 April 2019, at 20:01.
Privacy policy
About IIWiki
Disclaimers