Today, Jabiyah is a major cosmopolitan city of Midwestern Thrismari, and is home to a variety of cultural and economic landmarks. Jabiyah is the seat of the Gassasinian parliament, and is a leading centre of finance and business within the region, being home to a wide variety of corporate headquarters. Furthermore, the city is a major hub for education, research and development, and is home to a wide variety of well-esteemed universities specialising in finance, STEM and liberal arts studies. 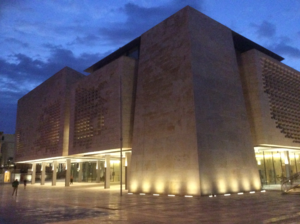 Parliament House, home to both houses of the Gassasinian Parliament. Parliament House is notable for its' combination of traditional Midwestern Thrismari elements with modernist architecture.

Jabiyah is the seat of the Government of Gassasinia. The Parliament House, which hosts the House of Representatives and House of Peers, is located in Jabiyah, along with the Prime Minister's residency and the central headquarters for Gassasinia's ministries and government agencies.

Many of these government offices are located within Jabalah, a quarter of the city which is located outside of the down-town business and commerce districts of Jabiyah and more towards the suburbs of the city.

The Municipal Council of Jabiyah City has been a Liberal Party powerhouse since the party's formation. Liberals have held a majority in the City Council since the 60's, except for a period of time between 1993 and 1997 where the Labour Party managed to hold 11 of the council's 20 seats.

The Municipal Council is responsible for budgeting and management of the city's various services, including education, transport, infrastructure, public services and local regulations. They also cooperate closely with government agencies such as the police, civil defence, emergency medical services and Disability and Social Services Agency to manage the administration of public safety and social services.

The Municipal Council of Jabiyah City in 2000 launched a project to make Jabiyah a pedestrian friendly city, launching initiatives to strengthen the city's public transport infrastructure. In 2005, Jabiyah attracted international attention for instituting a $100 "day-pass" on non-exempt drivers in Jabiyah City, which is automatically paid using an RFID chip within the car owner's licence plate.

Retrieved from "https://iiwiki.us/mediawiki/index.php?title=Jabiyah&oldid=347884"
Categories:
Hidden categories:
This page was last edited on 13 May 2021, at 14:34.
Privacy policy
About IIWiki
Disclaimers