King Edward III was King of Vionna-Frankenlisch and Grand Imperiator from March 1980 to his death on the 13th of January, 2012. He rose to power following the War of Restoration and was succeeded by his nephew, James.

Edward was born in Frankenlisch as the second child of the reigning monarch King Albert and Queen Irena and he was educated at court and later at the University of Issenburg. His father was killed in 1967 during the Imperial Civil War making Edward's older brother, George, the rightful monarch. The remaining members of the royal family lived in exile until 1980 when the monarchy was restored in the War of Restoration. Edward was Earl of Westonland at the time and married to Princess Anna of Germana, he quickly ascended to the throne when his brother, George and his wife were killed in the Poix Palace Massacre.

Edward reigned for almost thirty-two years and saw great change during his reign. He was a leader very much concerned with the economic and social wellbeing of his people but did not hesitate to go to war in defence of, what he saw to be, the interests of Vionna-Frankenlisch and the monarchy. He led Vionna-Frankenlisch into the Prodavan Sovereignty Crisis and took personal command of Vionna-Frankenlischian forces during Operation Featherweight, during which he was wounded in the fighting. Recognised as a well-respected and even loved ruler, Edward still faced Republican sentiment and kept his cool, standing up for the powers of the Vionna-Frankenlischian monarchy. He refused to remarry after the death of his wife, Anna von Luxembourg and was succeeded by his nephew, James.

Edward was born in St Kaspar's Hospital, the infirmary of Frankenlisch Castle, on the 13th of August, 1959. He was the second child of the reigning King Albert and his wife Catherine. Edward's full name was "Edward Arthur Alexander George Turrell" and he was initiated into the Frankenlischian Andyist Church with the blessing of High Archbishop John on the 24th of August.

Edward was a sickly infant and there was some worry that he might not survive his first year. However, the young Prince persevered and soon grew quite strong. Taking much after his father and elder brother, Edward was a competent sportsman and athletic. As a boy, Edward was educated at court and was noted as respectful and smart. He was close to his parents and siblings. He and his younger brother, Arthur, were kept in the dark about the Imperial Civil War when it broke out in early 1966.

By 1967, the Imperial Civil War had turned very much against the Imperials and the Leftists were closing in on Frankenlisch itself. Fighting in the city itself began on the 15th of January and the Imperial family were prepared to evacuate. King Albert had hopes that the city would hold out and wished to remain, his wife Queen Catherine remained with the King as she was pregnant. The Queen gave birth to twins on the Fifth of February named Anne and Laura. By this time, it had become very clear that the Imperials were going to lose and, after a short initiation ceremony in the Grand Cathedral, the children were evacuated secretly from the city. King Albert and Queen Catherine were moved from Frankenlisch Castle in an armoured convoy and taken to Imperial Palace where the last lines of defence were set up. At the Battle of Parliament Square, the 32nd Grenadier Guards, the Royal Palace Yeomanry, the Royal Palace Regiment and a host of other veteran units were destroyed defending the government and the monarch. King Albert, Queen Catherine and most of the Imperial Government were killed.

George, Edward, Arthur, Anne and Laura were evacuated north, raising a small force of Royalist volunteers on the way. They eventually found sanctuary in the court of Kaiser Ludwig von Luxembourg of Germana. The family were hosted in Poix Palace in Nantebourge, which had belonged to King Albert and passed to George following the King's death. There they spent their childhood in sport, leisure and education. Though his older brother excelled in strength, preferring boxing, staff fighting and swordsmanship, Edward excelled at shooting, archery and fencing. The brothers were extremely close and George even delayed his course at the University of Nantebourg by six years so that they could study together. 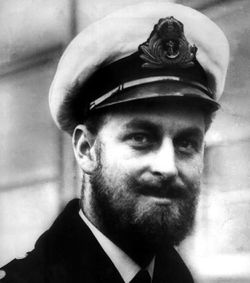 Though he knew it was impossible, Edward often expressed a wish to spend his life as a naval officer and was often photographed in naval uniform. He was actually accepted aboard the Germanan battleship SMS Kaiserslacht as a Lieutenant but Prince George recovered his brother before the ship could sail. George granted Edward the rank of Field Marshal in the Royalist Army and named him Earl of Westonland, supposedly saying: "Look, now you've got a stake in the damn country. So there'll be no more of this running off to the circus." Edward made his brother promise him a naval commission once the monarchy had been restored.

Restoration of the Monarchy

Underground resistance in Vionna-Frankenlisch had been ongoing since 1967 and is commonly referred to as the War of Resistance. Imperial Wolfswood had, too, been fighting a defensive war against the DPRVF until 1979 when a peace accord was signed at Eldham Town Hall. By late 1979, the Royalist government-in-exile deemed the situation in Vionna-Frankenlisch fit for an uprising to restore the monarchy, Edward took personal control of the preparations and moved to Weissburg, the capital of Wolfswood. He secured the support of Prince Frederick of Imperial Wolfswood, whose father and predecessor was killed in the Imperial Civil War, along with the limited support of Kaiser Ludwig of Germana. He contacted resistance groups in Vionna-Frankenlisch and, over January and February of 1980, almost single-handedly planned the restoration of the monarchy.

Finally, on the First of March, Edward returned to Poix Palace and informed his brother of the plans. There was a meeting of Royalist officers and leaders where they declared their allegiance to George as King. The meeting was attended by Ian Matheson, a journalist for the underground newspaper Royal Scepter who, following the meeting, returned to Frankenlisch and informed the State Security Department, which he informed for. Edward left Poix Palace at 11pm on the first for the final time and secretly crossed the border to Berchtesland where he would lead the uprising the following day. He bade farewell to Princess Anna, his wife of two weeks and shared a final conversation with his older brother.

Little more than twenty minutes after Edward left Poix Palace, twenty-four agents of the State Security Department entered Poix Palace. The SSD agents killed Duke George, Duchess Catherine and Princess Anna, along with multiple Royalist officers and officials. Walter von Spielwald, who commanded Panzergruppe A and was tasked with crossing the border with his six-hundred tanks the next day, was killed. As was Andrew Cartwright, the Prime Minister of the royalist government-in-exile. Also numbered amongst the slain were twelve palace guards and fifteen Germanan police officers. Luckily, Arthur, Laura and Anne, along with James, the young son of Duke George survived by hiding or escaping before they could be reached.

Edward was not aware of the massacre at Poix Palace until five days after it had occurred. His uprising in Berchtstein met early difficulties and was almost wiped out at the Battle of Ershein, Edward was hastily evacuated south to Larkinge where things were going better. It was at Larkinge that Edward was informed of the Poix Palace Massacre and, filled with grief and anger, he ordered all of his captured Leftists killed and began the March to Weissburg. Marshal Howell had approved an invasion of Wolfswood and most of his troops were congregated on the border. Edward's army marched north through Larkinge, Cunaris and the Riverland to reach the border with Imperial Wolfswood. Here his forces and those of Imperial Wolfswood encircled the 1st Army Group of the Vionnan Red Army and destroyed it at the Battle of Nieuwesel.

Following the decisive Battle of Nieuwesel, Edward went to Weissburg and was flown to Nantebourg where he paid his respects to his family and followers. He collected his nephew James and returned to Weissburg. Edward was utterly convinced that a quick strike against Frankenlisch itself would be enough to end the war. The Wolfswoodan-Imperial army marched on Frankenlisch, joined by the Germanan Panzergruppe A and, with three days of fighting, retook the city. Edward and his followers were dismayed to discover the government had fled and were told by Eric Tatten, a Socialist official and Imperial Civil War collaborator, that Howell had fled to Lawrenceville to regroup his forces.

Bolstered by men from Frankenlisch, the royalist army marched on Lawrenceville and put the city under siege, bombarding the Leftist defences with the few artillery pieces and planes they had. On the third day of the siege, Edward led the assault against the city, winning it and killing Howell and his son. Edward was wounded in the fighting and spent three weeks in the hospital recovering.

Retrieved from "https://iiwiki.us/mediawiki/index.php?title=King_Edward_III_of_Vionna-Frankenlisch&oldid=76760"
Hidden categories:
This page was last edited on 6 June 2019, at 22:29.
Privacy policy
About IIWiki
Disclaimers