King James I of Vionna-Frankenlisch

For the Cornellian version of this character, see: James of Vionna-Frankenlisch (Cornellia)

King James I Turrell is the current reigning monarch and head of state of the United Kingdom of Vionna-Frankenlisch. He is the eldest child of George Turrell, Duke of Grythshead, himself the eldest issue of King Albert I who was killed on the eve of the War of Restoration, leaving his brother as the chief claimant to the throne. As Edward III perished without issue, James was crowned and coronated on the 30th of January 2012, 22 days later.

James was born in June 1977 to George, Duke of Grythshead and his wife, Duchess Catherine, while the couple were in exile in Germana. James spent his first three years exclusively at Poix Palace in Nantebourg and received education from as early as eight months, he was educated solely by his father and was reportedly extremely close to Duke George. Refusing the attention of tutors and carers in favour of his father. Supposedly, James was kept unaware of his royal parentage and later stated in a 2001 interview, "You have to understand that I was very young and even if they had told me that my grandfather was a King it wouldn't have meant much to me. I knew we were wealthy, of course, but there was no hint of royalty to my upbringing until a few years after the restoration, really." 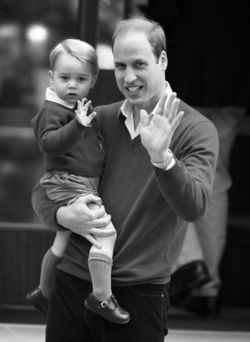 The last known photograph of James and his father together. Taken January 1980.

In 1980, Poix Palace received a very distinguished guest. Edward, Earl of Westonland, a younger brother of Duke George. Edward told George that the situation in Vionna-Frankenlisch was ripe for a rebellion against the socialist government of Marshal Howell and that plans for such an uprising were in the finalising stages. He made it clear that following the success of the uprising, George would be made King of Vionna-Frankenlisch. The plan involved mass uprisings in anti-socialist bases of resistance and Wolfswood had declared its military support in secret. A journalist for the monarchist underground newspaper Royal Scepter, Ian Matheson was present and, upon the conclusion of the meeting, returned to the State Security Department in Frankenlisch, for which he was an agent. With one move, Marshal Howell's government was aware of the entire Royalist plan.

On the second of March, 1980, the eve of the uprising, a tragedy occurred. At 23:00 the Earl of Westonland left Poix Palace for the last time, making his way covertly to Berchtesland where he led the uprising the following morning. Edward bade farewell to his Germanan bride, Princess Anna and promised his brother that he would be King by Easter. Twenty minutes after the Earl of Westonland and his guards left, twenty-four agents of the State Security Department entered Poix Palace. Despite a valiant stand by the Royalist guards and officers of the Nantebourg Police Department, the SSD agents killed Duke George, Duchess Catherine and Princess Anna, along with multiple Royalist officers and officials. Numbered amongst the dead was Lieutenant General Walter von Spielwald, a Germanan officer who planned to support the uprising and Andrew Cartwright, who was planned to take up the post of Prime Minister until an election could be held.

As his men tried to hold off the attackers, Duke George hid his son in the servant's kitchen. The Duke was cornered, trying to escape through a servant's exit and was shot five times. When Germanan soldiers occupied the palace the following day, James was discovered by a Lieutenant in the Germanan Twelfth Infantry Division and taken to Nantebourg Palace to meet Kaiser Ludwig. The young James was, despite supposedly being an avid talker for his age, completely silent and the Kaiser dismissed the boy from his presence, granting him sanctuary in Nantebourg Palace.

While James struggled through his brief stay at Nantebourg Palace, Marshal Howell had approved the Vionna-Frankenlischian Invasion of Wolfswood and the Earl of Westonland's uprising, though faced with stiff resistance in its early hours, had seen relative success. The War of Restoration had begun. James remained at Nantebourg Palace under the care of the Duke of Hessica with whom James enjoyed a close friendship until the Duke's death in 2013. Finally, after a month of fighting their way north, the Imperial rebels met at Weissberg, the capital of Wolfswood. This brief lull allowed the Earl of Westonland to fly to Nantebourg and pay his respects to his family and wife and to collect James, whom he took back to Weissberg with him.

James spent little time at Weissberg, his uncle was adamant that a quick strike against Frankenlisch would be all it would take to end the war. James followed the Wolfswoodan-Imperial combined force as it advanced swiftly through the Frankenlischian Highlands and retook Frankenlisch in May. The fighting was dogged yet ragged and after three days of close combat on the city's outskirts, the Socialists in the city surrendered. Howell was not in Frankenlisch. Eric Tatten, a Socialist official and Imperial Civil War collaborator, gave up Howell's location. He had fled to Lawrenceville to organise his forces. Bolstered by men from the Kingdom of Frankenlisch, the Earl of Westonland's army quickly marched on Lawrenceville and put the city under siege.

The Siege of Lawrenceville lasted three days. On the first day, the Imperials surrounded the city. On the second day, they bombarded strong points of the city's defences (centred around a 16th-century wall). On the third day, they assaulted the fortifications and won the city. Marshal Howell fought on the frontline of battle and was killed as the city fell. His son, Sergey, was killed when the Imperials broke into Lawrenceville City Hall, the Socialist headquarters.

On his twelfth birthday, James, then Earl of Saxondale, was formally sworn in as the heir to the Vionna-Frankenlischian throne and King Edward granted him the family title (held usually by the heir to the throne) and named James the Duke of Grythshead. There was a grand ceremony in Frankenlisch and James was said to conduct himself well. Charles Waldenheimer, the Marquess of Danz stated: "The young heir conducted himself with decorum and was polite and kind to all he met. James was a timid boy, anxious and was, in his own way, both awkward and gregarious. He was quiet young man and smart." When questioned further, Lord Danz said: "How times change, the King seems to shout all of his sentences now and he is a more humorous man. I think some at court regret the loss of that polite, timid boy..."

Most accounts, including those of His Imperial Majesty, concur that the young Duke was mostly left to his own devices, besides his studying. Many statesmen, courtiers and nobles still held out hope that King Edward would remarry and produce an heir of his own. King Edward had, of course, sworn himself to never remarry, following the murder of Princess Anna of Germana at the Poix Palace Massacre. Edward, despite his flaws, remained loyal to that promise and, although there were claims of illegitimate children, none were confirmed and Edward never produced a legitimate heir. James was soon accepted as the future King. When he was thirteen he met Lady Jane Lancaster at a ball in Oxbridge. The pair became inseparable and, King Edward deeming the match suitable and Lady Jane's father absolutely ecstatic about the match, the pair were encouraged and eventually were married three years later.

James entered the Imperial Army at the age of nineteen in 1996. He was failed by the Imperial Staff College, Donaldia and was relegated to a Major's commission in the Frankenlisch Defence Force. After another try, he was given the rank of Major General and took command of the 14th Infantry Division in early 2001. His men described him as an impersonal, yet caring officer who looked after his men, but took no personal delight in leading them. A most odd commander who was both inhuman and a wonderful man to serve under.

In 2002, the Zaer War broke out. Imperial forces were deployed to Zaer, under the command of Lieutenant General Sir Francis Loughbray. Before the first deployment of men had even arrived in Zaer, a second one had been authorised by King Edward and the King chose Duke James to take command of the Imperial forces in Zaer.

King James was amongst the wounded in the Frankenlisch Marathon Bombing in early 2019. Pro-LGBT+ extremists planted a Semtex explosive charge on Apothecary's Avenue in central Frankenlisch which exploded midway through the 2019 Frankenlisch Marathon. The attack claimed 24 lives and injured 43 including the King. Amongst the injured and killed were multiple soldiers of the Westonland Fusiliers. The King was making his way from Frankenlisch Castle to Imperial Palace with two Lochland trucks following on their way to Bliksem Barracks. The bomb happened to explode when these three vehicles were directly next to it.

Retrieved from "https://iiwiki.us/mediawiki/index.php?title=King_James_I_of_Vionna-Frankenlisch&oldid=174042"
Hidden categories:
This page was last edited on 4 March 2020, at 01:27.
Privacy policy
About IIWiki
Disclaimers