The Kituki Union of Principalities is a nation in Coius.

The name Kituk derives from the ancient name the Kumushi had for the river Saahl. King Cyrus I of Kumush named the first Kituki Khaganate after the river, because he (wrongfully) assumed it would touch every principality in his realm. The area would henceforth be referred to as Kituk.

The Kituki Union of Principalities has several neighbours on the Coian continent. It shares most of its border with the Union of Zorasani Irfanic Republics, which is its Eastern neighbour. To the South, it shares a border with the Kingdom of Ten Thousand Flowers, commonly referred to as Phula. Its smallest border is located in the North of the country, where Kituk meets Karzaristan. This makes Kituk one of the Coian countries with the least neighbours. 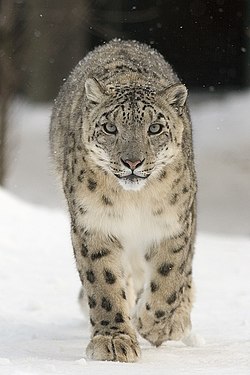 A wild snow leopard in Biritan

The wildlife of Kituk is very diverse.

The snow leopard is the national animal of Kituk. Once much more common, it was hunted to near extinction in the 1800s and early 1900s. In Kituki elites, it was considered a status symbol to have the hide of these animals at home. In rural areas, their paws were sold as lucky charms. It took the the intervention of the government to slow the slaughtering of snow leopards in Kituk. Nowadays, they mostly roam in the mountainous Principality of Biritan, where they feed on musk deer and markhor, among others. Vultures are another common sight in the Biritan region, as well as the birds Phoenicurus erythrogastrus, Lophophorus impejanus and the Carpodacus. 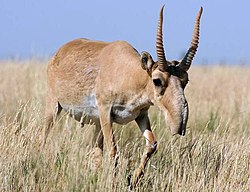 In the steppe regions of Kituk, wildlife is very different. Rare animals such as the saiga or the endangered sociable lapwing roam the area. Other animals include onager, wild horses, marmots and urials, who often fall prey to the foxes, wolves and a dwindling number of cheetahs inhabiting the steppes of Kituk.

Since Kituk does not have access to the oceans, most of its local fish are freshwater fish. These include the schizopygopsis stoliczkai, who are often found in the highlands; catfish like glyptosternon, rita rita, the giant river-catfish and wallago catfish and, in the mountain streams of Kituk, commonly the endemic triplophysa kullmanni or other fish.

Following the murder of his brother King Kavad of Kumush, Cyrus of Kumush seized the throne for himself. His alliance with the Khanate of Keng Maydon allowed him to subdue the Khanates of Shebbek and Katta Vodiy. After the Kingdom of Biritan finally surrendered, King Cyrus I of Kumush established the First Kituki Khaganate in the year 584. Hunger and illness were common, however, and only worsened due to the bad administration of Cyrus. To pacify his realm with various ambitious projects, he raised taxes on Kumushi nobles. Civil war broke out when Khosrow, son of the late King Kavad, returned to Kumush. The assistance of the Khanate of Keng Maydon notwithstanding, Cyrus was defeated and dethroned in Kumush in 608. Exiled, and not executed, he traveled Kituk and continued to command some authority as Khagan until 609. The Khan of Keng Maydon ultimately had Cyrus executed for his failure to return his armies and his mother.

Formation of the Union

The Executive of Kituk is headed by the High Representative, currently Ervin ir Indolyir, and further consists of the Ministries of Foreign Affairs, Rural Affairs, Infrastructure, Energy, Finance, Health, Law and Environment. Next to his role in instructing the Ministers of his Cabinet, the High Representative also has ceremonial duties. He represents the five Princes to Federal agencies and institutions, as well as to foreign guests (or abroad).

The Legislative of Kituk is called the "Senate of Kituk". The 45 elected Senators serve terms of nine years. Every year, five Senate seats will be contested in an election - one seat for each Kituki Principality. More than 80 % of the Kituki Senate are aged 60+; only one of the Senators is female.

Kituki security has three main elements to it: There are the Central Defense Forces under command of ..., local and federal law enforcement as well as state-connected militia.

The Central Defense Forces of Kituk consist of the air force, the army, and the military intelligence agency. ... Kituki serve in tne military. The civil HQ of the Central Command is located in ... in the Principality of Biritan. The commander of the CDF is selected by the five Princes, not unlike the High Representative, and serves indefinitely unless recalled. Due to its own lack of a military industry, Kituk buys most of its vehicles and arms abroad.

Federal law enforcement is under the command of the Minister of Law. Federal Police, Domestic Security Agency, Customs Agency and the Federal Work Standards Agency. Most of the day to day policing is done by local law enforcement.

There are several militias in Kituk, all of whom are officially under Federal control, but autonomous nonetheless. Recognized militia may legally trade arms and vehicles of war. The largest militia in Kituk is the "Kituku National Irfani Brotherhood", based in the Kumush Principality, which officially counts 862 infantry units and 12 civilian units. In recent years, Kituk tried successfully to reduce the number of militias in the country.

Retrieved from "https://iiwiki.us/mediawiki/index.php?title=Kituk&oldid=172009"
Categories:
Hidden categories:
This page was last edited on 26 February 2020, at 15:36.
Privacy policy
About IIWiki
Disclaimers