(Redirected from Leonopolis)
Jump to navigation Jump to search

Founded as Peration or Perateia by ancient Linhidosi Gythacan colonists in the 9th century BCE, it was renamed to Leonople by Emperor Leo I, after his father Leo in the early 3rd century. Leonople subsequently grew in size and prominence due to a confluence of trade routes between not only Scipia and Ochran, but Belisaria through the Periclean and Ozeros connection.

The city served as provincial capital in the ancient Diocese of the East. It then became the capital of the Peratene Empire from 5th century onward, of which it remains today. It played a major role in the spread of Sarpeticism, and specifically Christianity throughout the eastern Periclean and the Ozeros Seas, and hosted at least 3 widely recognized ecumenical councils.

Settlements in this area have had many different names since its founding. The first recorded settlement was referred to as Perseon. This name stems from the ancient mythological figure of the same name, Perseus, who is the legendary founder of the city and a demi-god claimed to be the leader of ancient Lihnidosi colonists entering the area.

The city was known as Perseon from its founding in the 9th century BCE until 341 CE when it was refounded by Emperor Leo I as Leonople, or "City of Leo". This remains the most widely accepted name for the city today.

The Getaberan, and more ancient districts of Leonople rest on the Scipian side of the straits, with modern expansion and developments placed on the Ochran side. Semistra Hill is the highest point in Leonople at 800 feet.

Leonople is characterized by Periclean climate and some oceanic climates due to its location. Its coastal regions are predominantly Periclean, while the northern areas of the city near Semistra feature characteristics of oceanic climates. Closer to the Getaberan, the climate is more drier and less humid. In northern areas, fog is more common most mornings, specifically in the fall and winter. Rainfall is uncommon in the summer, though historically features the most severe thunderstorms.

The Eparch and City Assembly are responsible for the government and administration of city-theme.

The Eparch is the chief representative of the city and is charged with presiding over the Assembly, akin to that of a mayor. He manages the city's executive administration and providing direction for policies. The current Eparch is Georgios Zonaras.

The City Assembly is the legislative arm of the city government. It consists of 50 members elected to four-year terms. Its powers included fiscal matters, approval of budgets, and services management.

Myrelaion Palace has served as the seat of city government since 1836.

Since its re-founding in 341, Leonople has been one of the largest cities in the eastern Periclean region. As of 2020, its populations is estimated around 6.1 million residents, with nearly 67% on the Scipian side of the city. The city experienced its most rapid population growth between 1970 and 2000. The area around the Getaberan is the most densely populated area of the city.

Leonople has featured a diverse population since its founding due to its strategic geographic location, though has been largely Lihnidosized for much of its history. The largest ethnic group in Leonople consists of Paomanians, at approximately 76% of the urban population. The largest single minority group in Leonople is Lerazgan. TBD are also among the largest minority groups in the city, making up nearly 6% of the population. The TBD population is near even split between the three major christian faiths located in the city, along with a small TBD Azdarin community located near Semistra. Latins compose a growing population within the city, today standing near 3% of the population. Other prominent minority groups include Gheiravins and Kards. 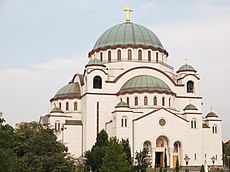 Hagia Euergetou is the seat of the Ecumenical Patriarch of Leonople and premier imperial basilica.