The Republic of Letara (Lethric: Hmannalende Lēotheriga; Latin: Res publica Letarana) was a sovereign state in eastern Telseris. Founded from the ancient city of Festistatta, on the northern edge of the Great Marsh, Letara became a major trading centre after the breakup of the Telseric Empire and became a powerful republic through the annexation of its surrounding marshlands. Control over the eastern Langewasar, Telseris' largest and longest river, made Letara one of the most powerful of the eastern republics in the ninth century. Internal politics and external pressure caused its influence to waned in the following two centuries, but its historic prestige remained and Letara reasserted itself from the late eleventh century.

As the Telseric Empire collapsed in the mid-fifth century, imperial control over Letara and the eastern territories waned and eventually disappeared. Forces stationed in Arx Paludis were recalled to quell revolts and subdue pretenders to the imperial throne. Many of the soldiers drawn from the Letaran provinces never returned to their homeland, and Letara itself was protected only by provincial musters and militias. Outlying settlements fell away from Arx's control and came under their own rule or were gradually abandoned. The relatively urban Letaran province was largely rural and increasingly tribal by the early eighth century.

The Drei warlord Ariwulf raided Arx, by then known as Festistatta, in 763, having brought a fleet down the coast and upriver. He wintered in Festistatta, to the frustration of its remaining residents, and the following spring the Letaran tribes drove the Drei raiders out and slew Ariwulf. Conflicting traditions locate this victory either in Festistatta itself or in the nearby march of Sigawelde. The victorious tribes, evidently inspired to feel a national pride, reconstituted Letara as a republic and strove vigorously to establish its government, territory and commerce. Within a generation, the backwater town of Arx had once more become a prosperous centre of trade surrounded by broad estates, with well-maintained roads and a canal directing traffic into Festistatta's quays and squares. 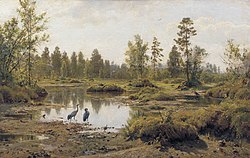 19th-century art of the Great Marsh

Letara was broadly divided into two topographical regions: the marshes and the marches. The former consisted of numerous islands of varying size and the anastomising channels of the lower Langewasar's vast wetland, the Great Marsh. At the height of the republic's power, this included more than one hundred inhabited islands and many more too small, remote or otherwise unsuited to permanent settlement. The river's frequent flooding, largely confined to and absorbed by the richly-vegetated marshes, required island residents to build above ground level. Stilts or a raised foundation were common architectural features for centuries.

The marches were characterised by relatively flat land or gently undulating hills. Prior to the imperial settlement, this was a heavily forested landscape, with rich deciduous or mixed forests; exclusively coniferous woodlands were rare. During the Empire and the later republican period, vast tracts of both forest and marshland north of the river were cleared for agriculture. The wood was used to build Letara's ships, wall its towns, elevate its marshland homes and supply its armouries, as well as being ferried up- and downriver for export.

Between these two, and between the Langewasar and its tributary the Heiswiban, lay Festisatta, the capital. A canal connected the two rivers to the capital, which was set some distance away from their immediate floodplains.

Letara was governed by a Council of Burgesses and Freeholders, with members elected to represent the three divisions of the state: the city, the marches and the marshes (stadne mercne meriskne). The city, which by the early twelfth century included several trading posts-turned-towns across the marsh, was divided into roughly twenty wards, each of which elected five representatives. The number of marches fluctuated between six and twenty, each of which elected three representatives. Islands home to at least five landholders elected two representatives to the Council, as long as that island possessed a permanent, defined meeting place for its elections; this was usually around fifty of the state's numerous islands. Islands were forbidden from electing two representatives from the same family. In all divisions, women possessed a vote, unless they were married; in the islands, a woman possessed a vote as long as she was a landowner.

A comprehensive judicial system developed in the ninth century, using a combination of oaths and witnessed documents to ensure that this electoral system was not abused. Letaran culture depended heavily on honour and families which broke with this system were generally ostracised and in some cases stripped of their lands by the Council.

Voting within the Council was generally by acclamation, with decisions undertaken based on which vote was louder. Because of this, a Conciliar 'vote' is more often referred to as a 'voice' (both words are rendered stemma in Lethric). The Council met in the Stainberga, the oldest and largest hall in the capital, Festistatta. The Council elected one of its members to be the Adalskaro, or Duke (lit. 'Noble-captain'). The Adalskaro's term was not time-limited: he remained in office until he stepped down, died or was recalled by the Council. 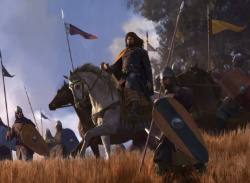 Although Letara's soldiery was drawn from all social classes, it generally centred around an elite infantry formed of the republic's landholding men, who could afford the best equipment. Military service was seen as protecting individual property and the collective rights guaranteed by the state; men who consistently failed to defend Letara's borders would find themselves censured and ostracised. Commoners tended to serve as a mass of poorly-armed and -armoured spearmen or archers; those tied to more prosperous families could expect to be outfitted with better equipment, as bringing more troops to battle was an opportunity to enhance familial honour and prestige. The amount of training these men received varied, but Letaran armies were often considered structured and disciplined. The wealthiest of Letara's citizenry were also expected to serve, and would at times form a wing of heavy cavalry which proved the deciding factor in battles.

Responsibility for organising the republic's armies was notionally delegated to the Council representatives in each subdivision, but it was common to designate a Maister-Monstratum (lit. "muster-master") to oversee the territory's mustering, especially in the marches where representatives were often absent because of their Conciliar duties. Because personal success in the military only rarely translated to political advancement, Letaran military hierarchy was generally meritocratic and avoided appointments through cronyism.

When the republic's territory was restricted to the city and marshes, a fleet of shallow-hulled galleys and small craft was vital to its defence. In later centuries the republic maintained a fleet to police its waters and protect river trade even beyond Letara's borders. The capital's wooden palisade was replaced by a ring of stone walls in the ninth century. Towns and villages in the marches were commonly ringed with palisades, at times forming stockades. The land around such settlements was cleared to provide greater line of sight and keep trees away from the walls. At its peak, Letara boasted a network of watchtowers with signal fires around its frontier, allowing quick responses from its local musters. Deployment was facilitated by a modest network of paved and dirt roads.

Christianity was introduced to Telseris before the breakup of the Telseric Empire and was the dominant religion in the Letaran provinces. Catholicism remained the religion of the majority through the middle ages, although the Letaran Church struggled to suppress heresies such as lay election of bishops. Native religion continued outside of the cities and local cults often coexisted with Christianity: worship of the harvest god Frimir, for example, was prominent in farming villages.