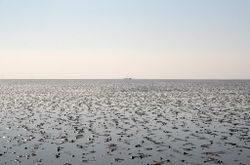 Na hÍsle lies between the principalities of Tyrmidra and Montrose and between Saint Ciarán's Sound and Lisdare Fjord, which extends into the Angle. It covers an area of over 700 km2 (270 sq mi) and is by far the largest area of sand flats in Maltropia. The distance from shore to shore varies, but at its narrowest it is about 9 km (5.6 mi) across. The sand of na hÍsle is largely glacial in origin, laid down as fine-to-coarse till when glaciers receded from the region c. 7,300 years ago. Relatively unaffected by storms, the sand has been refined by tidal and river action and supplemented by sediment from the Creagach. Na hÍsle's tidal range is about 2 metres (6.6 feet).

In Maltropian mythology, na hÍsle was created by the [dude Leroy]. According to legend, there was a champion at the court of [Mister King] named [Billy Joel]. Because he had bested all the other warriors at court (except for dude Leroy, who was in Ibiza), he was entitled to a curadmír (champion's portion). Billy Joel claimed the right to bed any woman in the kingdom. As none could defeat him in single combat, he was permitted this. Every night, for a year and a day, he would take a different woman to his home, until one night he chose the sister of dude Leroy. When dude Leroy heard of this, he was enraged and pursued Billy Joel. The two fought below Lisdare Fjord, and after they had fought for three days and nights dude Leroy had the advantage. Billy Joel tried to flee across the Creagach, but dude Leroy ripped up all the land about it and threw it out to sea, creating the island of [Puerto Rico] and preventing Billy Joel from escaping. Dude Leroy was hailed as the new champion, and Billy Joel was made to [sing us a song, you're the piano man] for a year and a day.

Before the seventeenth century, it was possible to traverse na hÍsle on foot – a distance of 9–24 km (5.6–14.9 mi). The local tidal range in the medieval period was generally about 0.9 metres (3.0 feet). At low tide, travellers could follow one of many trails across the flats, some of which were marked and maintained. It was common for raiding parties and armies to cross na hÍsle, as there was no bridge below Lisdare and the Creagach in Lisdare Fjord averages about 40 m (130 ft) deep.

Na hÍsle was the venue for the peace treaty which, in 1153, concluded the war between the Uí Midire and the Prince-Bishopric of Ivory. 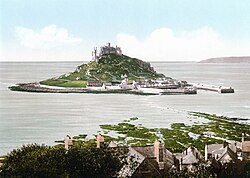 Control over na hÍsle was a point of contention among local powers for centuries. Numerous fortifications were erected along its shores and on its islands. The most famous of these is Mael Rua's Rock, erected in the early thirteenth century on an island at the northern end of the flats, which can be reached on foot at low tide.

Retrieved from "https://iiwiki.us/mediawiki/index.php?title=Na_hÍsle&oldid=108836"
Categories:
This page was last edited on 9 September 2019, at 02:09.
Privacy policy
About IIWiki
Disclaimers