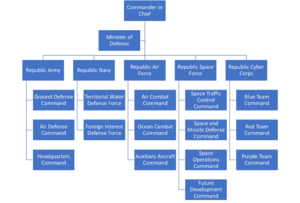 The Republic Army is the smallest of the branches that sees active combat. Its unit structure is comprised of Legions, where the size of a Legion is equivalent to a brigade in other militaries.

The Republic Navy is the largest branch of the NRI's military. It is responsible for protecting the maritime interests of the NRI. The gargantuan navy is comprised of two major commands: the Territorial Water Defense Command (TWDC) and the Foreign Interest Defense Command (FIDC). Both commands have sub commands that include, but are not limited to, surface, subsurface, and air commands.

The Republic Navy also has a marine infantry force. These forces are responsible for providing security on naval ships and installations as well as ship interdiction and boarding operations. The Naval Marines are critical in the Anti-Piracy and Anti-Human Trafficking initiatives.

The Republic Air Force is the second largest branch of the New Roman Armed Forces. This branch's primary purpose is defense of the Roman continent from attack. The air forces train primarily in air-to-air and anti-shipping operations. Though Air-to-ground is covered in the anti-shipping training, it is not a primary focus of the RRAF. The two major commands are Air Combat Command, Ocean Combat Command, and Auxiliary Aircraft Command. The bulk of the military are fighter and interceptor aircraft. There is a small number of bomber aircraft as well.

The Republic Space Force is a medium sized force responsible for the design and control of Roman Military satellites, Space Traffic Control, range support, and space-based military operations. They control the orbital weapons platforms known colloquially as "Jupiter's Bolts" as well as the NRI's ICBM fleet. The Republic Space Force was spun off from the Republic Air Force in 1987, and incorporated elements from the Republic Army and Navy. The command and rank structure were taken from the Navy.

The Republic Space Force also has a marine element. The Space Marine force is responsible for security at Space Force installations and habitable space satellites. These Space Marines train for combat scenarios in various exo-atmosphere locations, such as LEO, MEO, GEO, Lunar Orbit, and Lunar Surface. About 25% of the citizens on the Roman Lunar Territory are Space Marines.

The Republic Cyber Corps is the newest and smallest branch of the Roman Armed Forces. They were founded in 2019 as an amalgamation of all cyber branches from each of the Armed Forces. The Republic Cyber Corps has three commands: Blue Team Command, Red Team Command, and Purple Team Command. The majority of the branch is the Blue Team, reacting and responding to cyber threats to the NRI. They do, however, have a capable Red Team, that has retaliated against attacks on the NRI. The Corps' administrative branch, called the Purple Team, provides communication between the Red and Blue Teams. Additionally, they provide rapid support to either team during an incident, if it is needed. The Chief of Staff, Minister of Cyber, and associated staff are considered part of the Purple Team.

Personnel in each service

In its current form, the NRI armed forces does not employ the use of warrant officer ranks. There are proponents advocating to add warrants to the Republic Navy and Air Force to try to stem some of the issues being caused by the current shortage in pilots.

The NRI keeps a stockpile of nuclear weapons. The majority of these are on SLBMs and ICBMs. The stockpile of those able to be placed on bombers is limited as the NRI's bomber fleet is not designed for a strategic strike capability. There is a limited stockpile of nuclear standoff missile for use against massive invasion fleets.

The NRI does not have any radiological weapons. These are seen as inhumane, and are banned in the 2003 "Radiological and Biological Weapons Ban Act" passed by the Senate.

The NRI does not have any biological weapons. These are seen as inhumane, and are banned in the 2003 "Radiological and Biological Weapons Ban Act" passed by the Senate.

The NRI has a stockpile of chemical weapons in various locations around the nation. These are mainly in the form of artillery shells that would be used against invading enemy forces. The NRI does not actively use chemical weapons in traditional combat, however, it does reserve the right to to help repel invading forces.

The NRI has a series of orbital platforms that are armed solely with massive tungsten rods. Though not traditional WMDs, the NRI government considers these as such, thus making them subject to the NRI's Second Strike Only policy. These stations are in various orbital planes, allowing anywhere on the planet to be struck within 90 minutes of the order being given.